Skip to content
A Ramble around Athenry in the 40s: Bridge Street, Abbey Row, Barrack Street 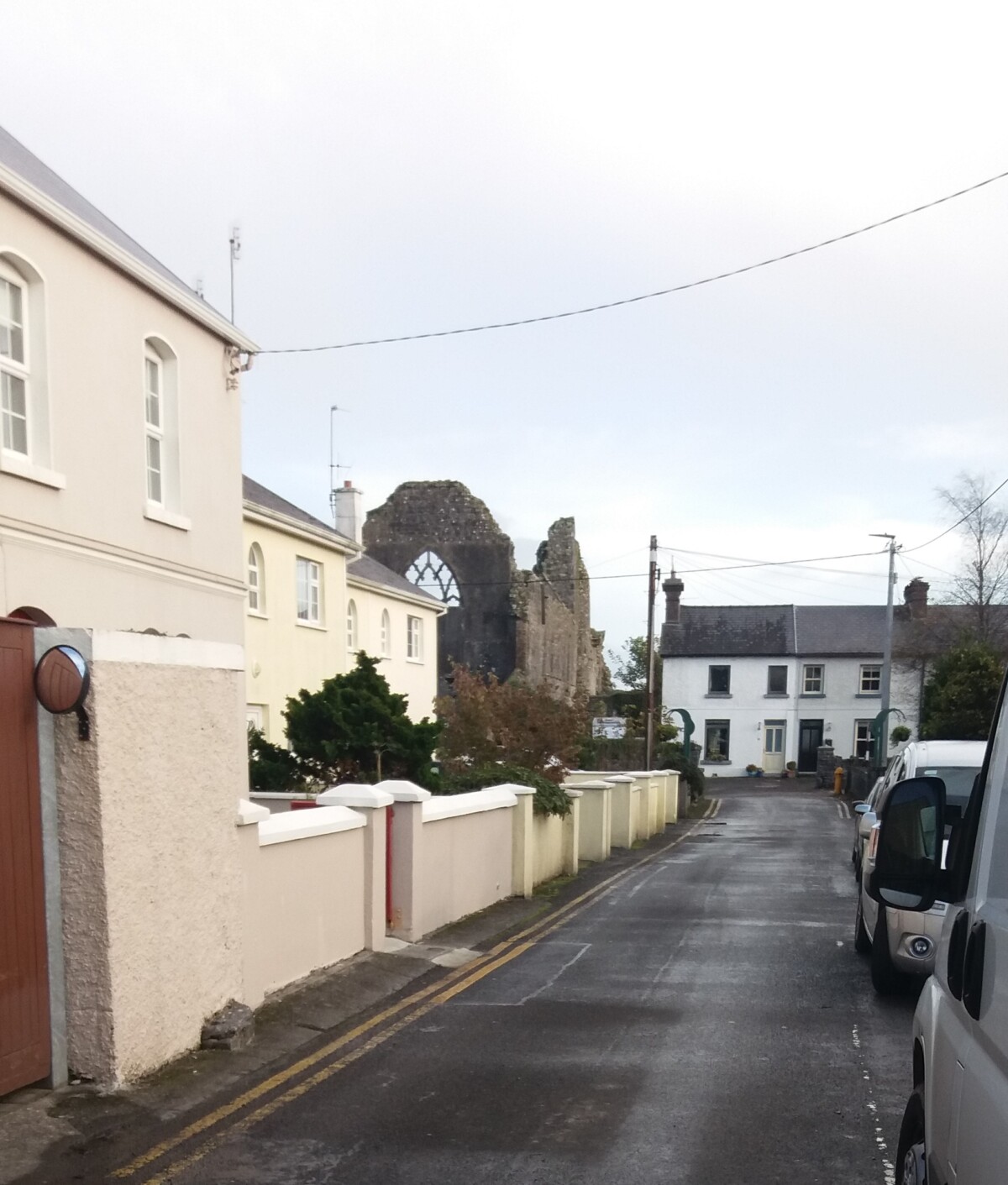 As before, in the other articles, I’m speaking from memory and liable to make mistakes but I’ll do my best.

Bridge Street – on the right is the Allied Irish Bank which once was the old Post Office. Next there was Joe Mannion’s Pub where Claire Parr has her hair dressing salon now. Joe was a ‘legend’ in his time. His claim to fame was that he supplied drink at the Galway Races which were held at the time, for the two days, on the Wednesday and Thursday. He had the franchise for the outside enclosure and as that’s where the crowd was.  He was a well known and popular man. He had two marquees for the duration and employed many people from our area. It was a red letter day for Athenry when Joe moved his business into Galway for the races. He had one son and four daughters.

Further down the street, where Millie Browne’s shop is now, Michael Whelan from the Square had a shop there and before him Paddy Judge. Next door lived Michael McGuinness who was an insurance official. His daughter Clemmie still lives there. She was famous in our time, both locally and nationally, as a tennis player. His wife, as far as I can remember, had a cure for burns.

After McGuinness’s house came Kitty Fahy’s. That’s where Conn Fitzpatrick lived also. He worked as a clerk on the railway. He was Rosaline Fitzpatrick, now Mrs Paddy Ryan’s, father. Eileen McCormack now Eileen Corley lived next door. They came from River Lane. Her father Jimmy worked in Corbett’s yard. Her brother, Jimmy ‘Junior’, was a postman and her mother Nellie was also a well known figure in Athenry. Eileen married Paddy Curley.

Next, across the street, where the new Post Office is now, was a yard owned by McDonaghs who were merchants in Athenry before my time. Regans from Loughrea had a stone cutting and monument business there. They were connected with Nellie Regan who for years was the church sacristan and lived in Chapel Lane.

Peter Curran lived where Tony Lenane’s house is now. He was married to one of the McDonaghs. Herbert Taylor whose family owned Taylor’s Mill lived in this building. I remember Guard Walsh also there and the FCA, (you would never be short of a good pair of boots or trousers for ‘working’ once you joined) had an office there. Kinneens then took over the shop and have run a very successful business to this day. As far as I know it was part of a yard owned by McDonaghs before then. Then there was the Ulster Bank. It hasn’t changed much since then. Taylor’s Field, owned by the mill, or Castle Park as it is now known, which came next was the unofficial Town Park and it was to here the great entertainment shows came. Travelling Shows, Fun Fairs, Pongo, Bingo and Dance Marquees all came to Taylor’s Field – but that’s another story for another day. 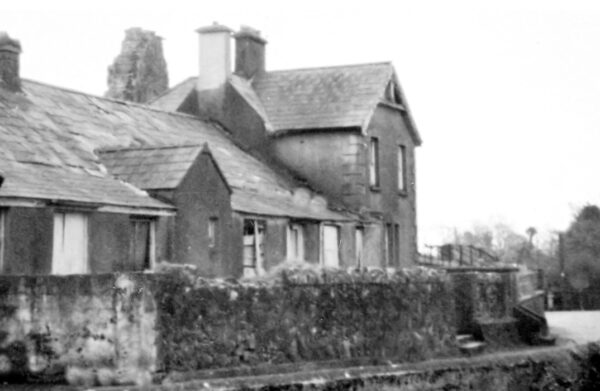 Down towards Abbey Row, where Bridie Finn lives now, was a school residence owned by Mrs Woods. She taught next door in the old Boy’s School. I went to school there for a short length of time before it closed down. The teachers at the time were Martin Walshe, Sean Keane and Mrs Woods. Johnny Whelan lived on the other side of the school and he taught out in Newcastle National School. His house-keeper, May Connaughton, now Mrs Larry Kelly, still lives there.

Then came the Ball Alley, which was a very famous landmark in Athenry. It was the scene of many top class Handball Matches. Athenry became famous in the 40s and 50s for having many brilliant handballers namely: Berlo Walshe, Nailer Howley, the Barretts and others – I can’t think of all their names.

We now go into Abbey Row and the first house there was Aggie Qualter’s. She was a legend in her time. As a writer and historian she was acclaimed throughout the parish and area of Athenry. She has written many books. Her son, Murty, a teacher has recently retired.

Next was Joe Egan’s. He had two children named Jackie and Kathleen. He also had two people staying in his house. One was called Willie Farrell who had a small bicycle repair shop down where Rooneys have the Monument Works now. His workshop was a regular haunt for us at lunch time and Willie would tell us all the stories and tales of bygone days in Athenry. Willie was a well known and popular figure. Also living in Joe Egan’s was a man called Bartley Flanagan. I think Bartley worked for, a neighbour of his, Johnny Cleary who lived two doors away.

In between was Jimmy Cleary’s house. As far as I know Johnny’s wife was a district nurse. Tom Cleary who now resides here runs a very successful building business. Next came Tommy Howley who had a hackney business and his sister ‘Tackie’ later married John O’Dowd and lived in Park. After that came Joe ‘Nailer’ Howley. ‘Nailer’ was a famous handballer and it was from this game he derived his name. Paddy Lynskey lived with the ‘Nailer’.

The houses, where the two Murtagh families (of Delia and Bernie) lived, now belong to Clarkes and Ryans. I think Tommy Ryan’s parents lived there for a while and also, Jim Grennan. Jim worked in Higgins’ and he had two daughters Mini and Angela. Dan Taheny, teacher and historian who taught in the ‘Bish’ and now living in Woodquay, Galway, was born in Murtagh’s house.

Now, in Barrack Street, the first house was belonging to Tom Milmo, who worked for the County Council. His wife, I think, was a district nurse. He had two children Phyllis and Frank. Frank went to school with me. I think the next house was Monica Kenny’s. That was a small thatched house where Tully’s house is now. She had a shoe repair business and later married Hubert McInerney who worked in Mahons. On that side of the street there lived at various times the Reilly, Finnerty and McNamara families. The Finnertys later moved to Ballygurrane. The McNamaras later moved across the street to where Mattie and Joy now live. Then further up we come to the old Barrack, where Charlie King is now. On the other side of the street was Sweeney’s Garage which I mentioned before. The buildings after that changed a few times. Here was Paddy Murphy’s forge. Paddy lived where Finbarr Ryan now lives at the Arch. Jack Heffernan’s taxi was garaged here also. Later John Lawless and now his son Seán had a workshop here. In our day there was also a garage there belonging to Ned Kennedy. He’d be Derek Kennedy’s brother and now, I think, lives in Kilrush. He was our local taxi driver, and he often took us to Seapoint, Salthill, on a Thursday or Sunday night. The fare at that time was about 2s 6d each [a half crown]. I remember another little garage there run by PJ. Vaughan.

The street was always a hive of activity and we loved to delay there on our slow journey to school. There was nothing after that apart from Fred White’s (a postman who came from Kilskeagh) garden until you came to where Mattie McNamara lives now by the river. That house was owned by his father Tommy who was another famous taxi man and he also had a hearse. 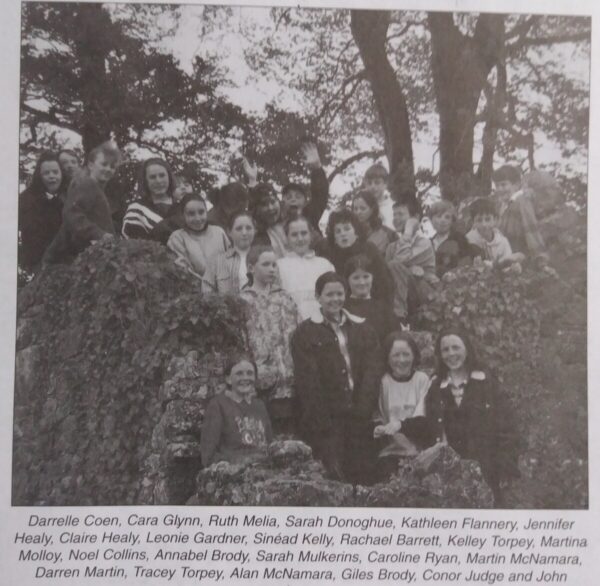