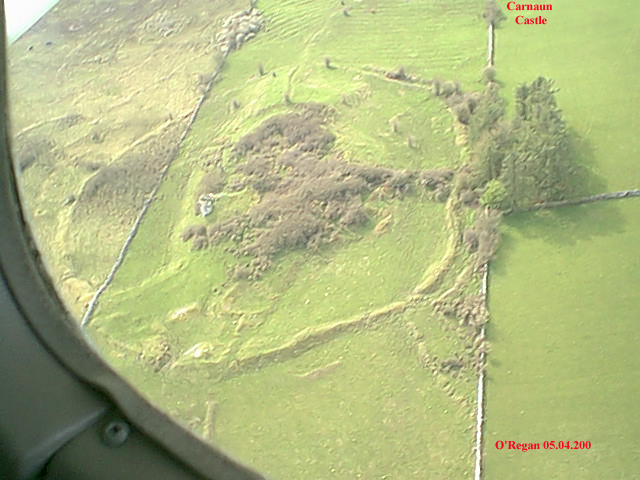 In order to reinforce their position in parts of Ireland conquered, the Anglo-Normans constructed earthwork castles in the late 12th and early 13th centuries.  These early earthen fortresses are of two recognised forms – the motte with and without a bailey, and the ringwork. The former consisted of a high, flat topped mound, the motte – encompassed by a fosse or ditch which was adjoined to the base court or bailey at a lower level. The flat summit of the motte accommodated a wooden tower called a bretasche, which may have been enclosed by a wooden palisade. Ringworks are very similar to raised raths and low mottes and are therefore difficult to identify. While they are usually found without the associated bailey they can, with their external ditch, look similar to a ringfort. Inside these ringworks it is likely that timber castles were erected and in some instances stone castles were later built on the site of the earlier timber monument. Some two miles outside the town of Athenry, in the townland of Carnaun, there is the remains of a ringwork castle with a later stone structure on the inside. Located some 200m on the Athenry side of Carnaun National School, it appears as an overgrown stone structure on an elevated position. Clearly visible from the roadway the monument comprises of a flat topped Hillock with associated enclosures, banks and roadways.

The top of the hillock is enclosed by a poorly preserved masonry wall in the south and a dry-stone wall along the remainder. They enclose a space 32m north-south and 50m east-west. The hillock is enclosed by an outer defensive ring, which encloses an area 105m-north south and 125m-east west.  In the west and Northwest there is an outer bank and fosse feature. The monument is identified as a convent on the Ordnance Survey Maps, as ‘Ruins of Con’ on the Fair Plan, and ‘Convent (in Ruins)’ on the Ordnance Survey twenty-five inch maps of 1892 and 1927-28. Because of its categorisation as Convent Ruins, the site at Carnaun has failed to receive the attention it deserves. Its significance as an early earthwork castle located on the outskirts of Athenry Town is immense. King John’s Castle, in Athenry Town, was founded by Meiler de Bermingham about 1240AD.

However the existence of a possible 12th/13th-century castle at Carnaun poses numerous questions. Who owned the castle? When exactly was it built? If the Anglo-Normans founded Athenry town, could it be that Carnaun castle was in the possession of the native Irish, or was it the predecessor to King John’s castle? What is most interesting about the monument at Carnaun is that today not only the site of the earthwork castle survives, but in the adjoining field numerous low field banks appear to   indicate possible early field boundaries/systems.  In addition, to the north of the earthwork site, there are the clearly defined remains of an embanked roadway.  In the field to the east there is a rectangular enclosure outlined by an earthen bank with an   internal division and in its northern half a small hut-site.  To the south there is a sub- circular platform which is linked to the main enclosure by a slight earthen bank.  It is not possible to say if all these features are associated with the ringwork castle site or the stone monument later erected on the site, the traces of which survive today.

The surviving stone structure is probably that of a tower house or later castle building erected on the site between 15th-17th centuries.  What survives is a masonry wall of roughly coursed blocks, which extends for a length of 18m.  At the eastern end there are the overgrown remains of a turret.  It has a slight plaster cover on its walls, which are one metre thick.  The only architectural features are narrow loops in the three surviving walls.

A list of Galway Castles and Owners in 1574 indicates that there was a castle at ‘Cahernye’ (possibly referring to Carnaun) which was in the possession of Tybbott Beg in 1574. It is clear from visiting the site at Carnaun that it is not the site of a convent and is most likely to be a very early castle form, which has been much altered in later times. I would be very interested to hear of local’s memories of the monument or any references that might have been passed on from earlier generations. I would be especially grateful for any photographic references to the site at Carnaun.

Page 149 of The Lamberts of Athenry Book 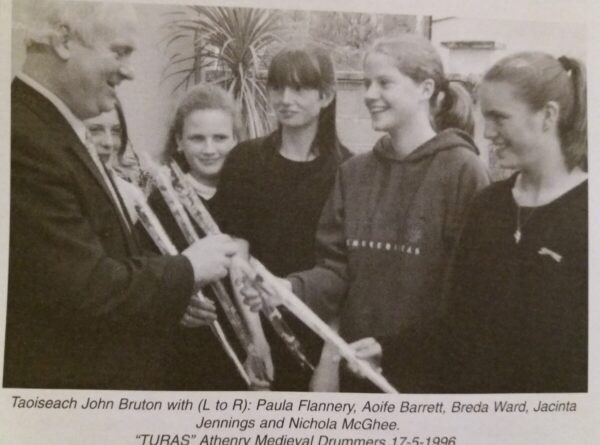 Hot on the tails of the likes of Galway’s’ “Macnas” and “Moceolas” are… by Anonymous
Athenry Journal Archive | Art, Community, Drama, Education, History