Skip to content
A Walk Around Athenry with Seamus Lynch 1998 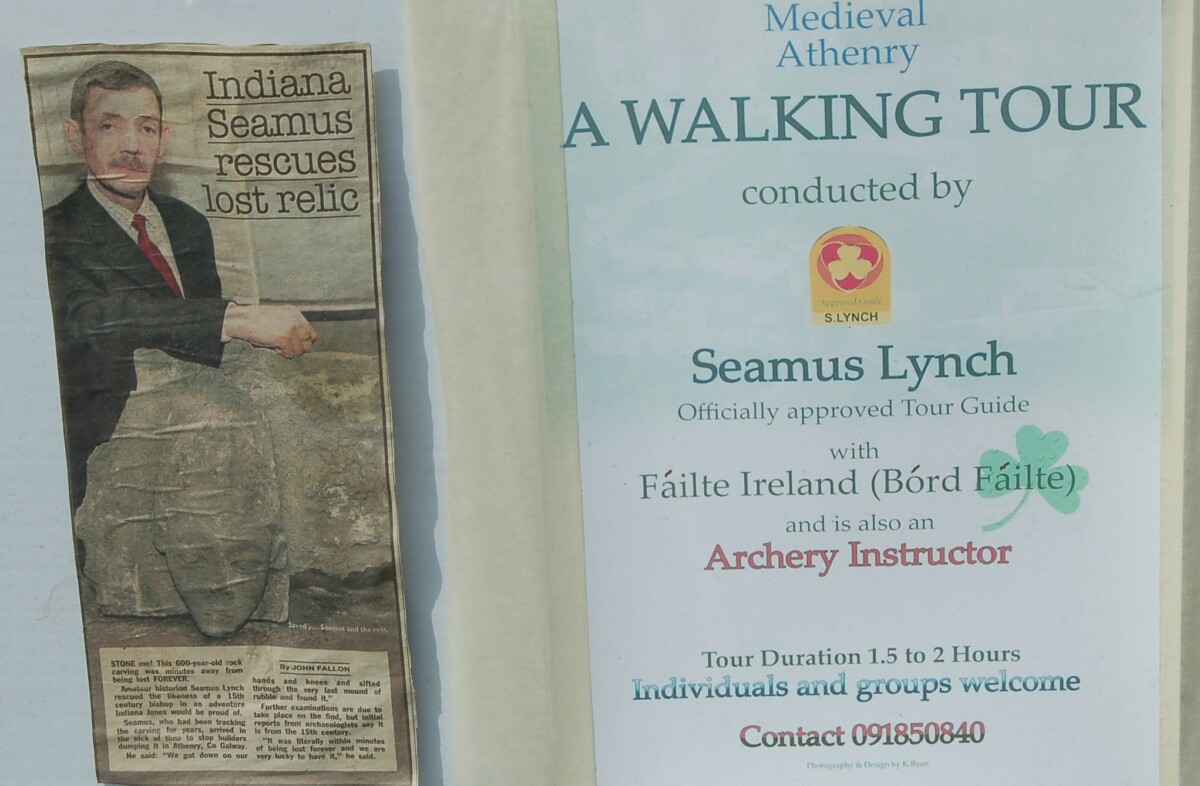 As it is a fine, if rather chilly November day, I decided to hit off on one of my favourite walks, which will take in an area known locally as ‘Paddy Kilkelly’s boreen’. Accompanied by my 12 year old terrier, I leave my sister Eileen’s house on the Tuam Road, but before I do, I make sure to put my name on the meal of bacon and cabbage which is about to be prepared. As in most other parts of the town, new houses and new families mingle with the older houses and older families. In the row of Park Houses, reside such people as the Collins, Morans and Ryans. Mrs. Ryan, mother of Tony, Sean, Lol, Michael, and Mary, lives here. She was born on 25/Aug/ 1900, which must surely qualify her as one of the oldest people in the parish.

As I pass along here, I think of the late Batty Cunniffe and his son, my good friend the late Barry. It is widely accepted that the Cunniffe’s are the oldest native family in the area. I am reliably informed that the first generation of this family indulged in the highly skilled trade of “weaving”. I should be very interested to know where they acquired the essential raw – material, which of course was FLAX. Among the newer houses further down the road are those of Dermot and Helen McNamara , Terence and Mrs Brady and Gerry and Mrs. Dempsey. On the other side of the road, a lovely new bungalow, formally owned by Gerry and Mrs Holland, is now the property of my good friend and neighbour, Noreen Hession. The Holland’s relocated to a new house in the Raheen area.

I continue on until I come to a right turn, which will take me some length to the next family I meet, which is that of Jim and Helen Reidy. Jim is an official in the Dept. of Agriculture, and was until recently, very much involved in local Handball activities.

I pause for a moment at the top of Kilkelly’s – On my left is a new bungalow belonging to Sean and Martina Kilkelly, Martina is employed as a clerk in the local Post Office. Paddy Kilkelly along with his daughter Brigid, live in the farm house on this side of the hill. Towards the railway are some beautiful new houses including those of Kevin and Geraldine Healy and Gerry and NoreenDoherty. But today, I decide to continue straight on for an interrupted half – mile which will bring me out on the Monivea – Athenry road.

The last house here is owned by Theresa Dempsey and her family. Sean Dempsey’s sudden and much lamented passing from this life has already been well documented. His various sporting abilities were second to none. Like countless, I considered myself very fortunate to be a personal friend, and I was privileged to play alongside him on the local snooker team on numerous occasions in many venues throughout the province. He will be greatly missed. ‘Ar dheis Dé go raibh a anam.’

On my left, on the main – road is the village of Cahertubber. I have happy memories of fishing and swimming here as a child. In those long – gone days, it was considered a major achievement to graduate from the local ‘swimming pool,’ ( the widest pool in the local river at the Bag Factory) to the daunting waters of Cahertubber. In Cahertubber there was a small lake where we fished for tiny fish which we called ‘Roach’. Nobody ever seemed to eat those fish but the ‘craic’ was always great.

We were fascinated with the various stories relating to the hilly area, known locally as ‘Cnocán – Gabhair.’ This is reputedly a Pagan Fairy Lios one of many which bound the Athenry locality.

The road which passes to the left hand side, alongside the old Council Irrigation  Grounds, leads to a vast open area of bogland, known as ‘The Moneen’. Little known locally, this wide expanse of bog, (a haven for all sorts of wide life and a great escape for anyone wishing to get away from the hustle and bustle of town life) goes right across until one comes out in the vicinity of the Gloves area.

I am now in Ballydavid, and on my righthand side, Rene Doherty lives alongside her son Noel and his wife Mary. The old Ballydavid houses are next. They consisted of families such as Maddens, Loughnanes, Cunniffes, Mulkerrins, Dohertys, (Michael Doherty was a renowned local handballer) and of course Tom and Gerry Mc Namara as well as the Delaneys. On the left are some beautiful new bungalows, belongs to Luke and Marion Glynn, and Raymond and Midge Glynn. Tommy Quinn’s hugely successful enterprise, ‘Arch – Trailers’ is also along here. His top quality products can be seen in every corner of Ireland.

I continue on towards the railway bridge. Martin Burke has just recently completed the construction of some beautiful new two storey houses in what we once knew as the ‘Captain’s Pond’. Over the bridge, I am now in the New Line what I consider to be one of the nicest and most modern areas in the town.

The New Line at the appropriate time of year, the front and rear gardens on either side of the road are truly a sight to behold. Along the right – hand side are families such as the Fitzimmons”, Christy and Patricia Kelly, Michael and Mrs Burke, Sean and Mary Mc Govern, Mattie R.I.P. and Bridie Gannon, John and Mrs Wall, the residence of the local curate is in between these.

The Day Care Centre (formally the home of the local Doctor) provides a wonderful and sometimes little known service to the locality. A team of volunteers, render an invaluable service to the less mobile and house bound in our community. Gerry and Claire Nevin are next, while Professor Eitenne Rynne and his wife Aideen live in the comer house which was once the home of Supt. Kelly and his family.

On the left – hand side live such families as Vincent and Mrs Rohan, Oliver and Mairead Torpey , Christy and Winnie O ’Grady, Greg and Ann Rabbitte, Michael and Ann Moran, Christy and Theresa Archer, Ned and Ann Waldron. Eddie is well known for his voluntary work contributing to the Athenry area and I would like to wish him many happy and busy years of retirement from his position in the ESB Redmond and Ita Carr and Mattie and Mrs Fitzpatrick are the far side of the local Health Centre.

This building has just been re-furbished. Incorporating the house which was once Nurse O’ Gorman’s, it has several new treatment and waiting rooms. There is a wonderful service provided here by Doctors Vivian and Anne Brennan, along with their Staff of Nurses; Mary Jo Curran, Patricia Flannery, Sadie Casserly and Sheila Kelly whenever they are needed. I would personally like to wish Sheila a speedy recovery to full health and look forward to seeing her back on duty in the near future. Not forgetting here‘, the always diligent and ever co – operative clerical staff of Eilish O’ Neill and Maura Hardiman.

The house on the corner, ‘Mount Amber’, which was until recently owned by the late Paddy Murphy, Veterinary Surgeon, and family, is now the property of John Doctor Frances Lenihan. From this point I can almost get the aroma of the bacon and cabbage, which at this stage should go down a treat.

Thank you for joining me on my rambles today. Please join me once again in some future edition of the Journal. 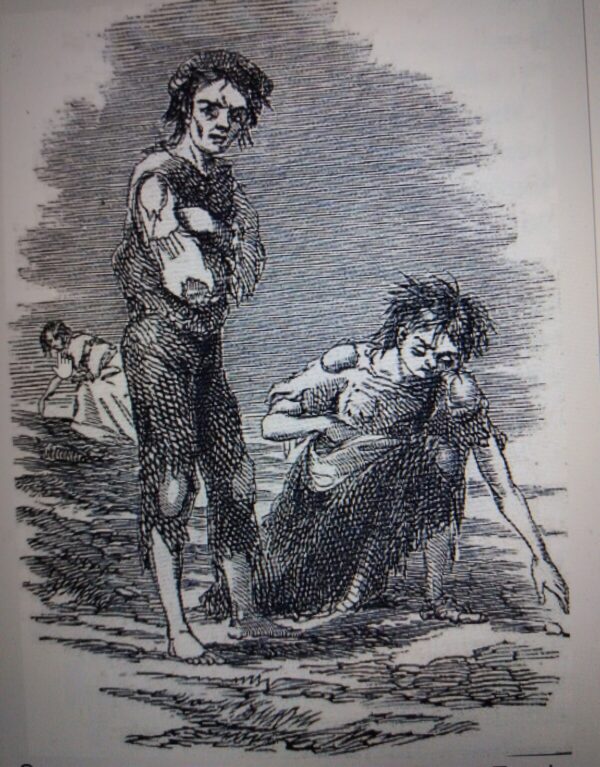 The Great Famine and its effects on Athenry

In the years preceding the Famine, Ireland had a population of eight m… by Finbarr O'Regan
Lamberts of Athenry Archive | Education, Famine, History, People