Population ﬁgure within town walls was 1093. There were no houses then outside the Arch, Swan Gate, Chapel Lane, or Mill Bridge.

Barrack Lane: 11 houses and 32 people, numbers 1 and 2 uninhabited. Two little houses at the back of Keatings Garage (ruins still remain), 4 houses down lane around John Lawless’ workshop, 3 houses on site of Matty Mac’s House. I cannot trace No. 10, but No. 11 was then a Police Barracks (three storey) – now Abbey Row – occupied by 16 policemen and their families – in all 29 people. They were not the R.I.C. (not then established) but were listed as “policeman and tailor, policeman and cutter, policeman and shoemaker” and so on. Chief Constable was William Hunt and the Sergeant in charge was McFaul.

The people who lived at Barrack Lane had names different to those of 1851 Census – Burke, Camey, Greelish, Coan, Murphy, Lally, Kenny.

At that time there was no road down from Mill Bridge and no river, only a little stream – dry in summer. There was no school-house or ball-alley. It was all waste ground (1 acre, l rd. and 18 perches). This was also the pattern in 1851.

North Gate Street – 37 houses and 168 people. No. 7 Francis Healy, retailer of spirits – the oldest pub in town – on corner opposite Eddie Sommers. No. 8 John Burke (grocer). No.13 Richard Kilkelly, publican and farmer, a very old Athenry name. Here could be the roots of the Kilkelly family. The names of the children were John, Paddy, Michael, Jim and Mary. No.13 John Cunniffe, weaver, another very old Athenry family. The family names were exactly the same as John Cunniffe’s (weaver) two generations on – (Batty’s father). They were: John, Paddy, Michael, Martin, Mary, Bridget and Eliza (Lizzy).

The Cunniffe’s were wonderful weavers and colour-blenders, but were forced out of business, as were all the Cottage Industries of Athenry through the British Industrial Revolution, and the importation of cheap British fabrics:- face-cloth, winsey cloth (which cloth resembled wool), linen, cotton, poplin, Italian cloth and many others.

No. 31 – another pub (James Burke). All the other tenants of North Gate Street were made up of stone-cutters, hatters, weavers, ﬂax-spinners, wool-spinners, brogue makers (5), baker (1), smith (1), thatcher (1), carpenters, nurse-maids, house servants, labourers and a few paupers. Strange names were Dillany and Alcock.

When I was young there was about a dozen houses from the Arch to Coens. The lane was then only ten feet wide.

Abbey Lane now Bridge Street, 9 houses and 48 people. No. 3 was ruined. (By 1851 three of those houses were in ruins). The names are different to those on the 1851 census – all but one, Cannons. My own paternal roots – Michael Cannon, listed as a weaver was my great grandfather. He was then aged 30, and was born there. One member of his family, then aged four years, was named Murty. They lived in a little thatched house, opposite the park. No1 – Brownes – painter and glazier, 9 people lived here. No. 2  Bartholemy Burke – a steward. No. 3 – Ruins. No. 4 – Mark Burke (shoemaker). There were eight people in the house. No. 5 Martin McDonnell (farmer, half-acre). No.6 John Brennan (tailor). No 7 Martin Brennan (tailor). No. 8 – Michael Cannon (weaver). No.9 – Edward McCage (hatter).

Allen’s Lane – 4 houses and 14 people. No.1 in ruins. The Allen family (5) lived at No. 2 – all tailors and mantua makers. I am not certain whether Burke Street or Davis Street was then Allen’s Lane, but I believe it to be Davis Street. When I was a child O’Flynn’s, then a little thatched house facing Davis Street, was very old (now Rooney’s Boutique). There was no square in Athenry then as Coppingers, Fitzsimons’ or adjoining house were not built until 1886. I heard my father say that at one time one could drive from Cross Street straight to North Gate St.

McDonnell’s Lane – 10 houses and 55 people. All Irish names – Donaghoe, Kenny, Bums, Melody, Clarke etc., brogue makers, flax-spinners, house servants, washerwomen and labourers. Larkins Forge was not there then but was very prominent in 1851. It was the “breeding ground” of Athenry Nationalism and Fenianism, and they said it was under constant surveillance by the Peelers. The Anthony O’Brien Schoolhouse was at No.9 and Anthony lived at 41 Back Street, then 31 years old.

At the dawn of Padraig Fallon’s literary fame, it was said locally that he had inherited the gifts from schoolmaster O’Brien. They were blood cousins. It seems schoolmaster O’Brien and his family were brilliant people, but at that time ‘they were ﬂowers born to blush unseen.’ Johnny O’Brien, of another generation – lived opposite Fallons when I was young. The Fallons were a gifted family with music, (piano and violin). John Anthony, the youngest, became a veterinary surgeon. Johnny O’Brien, was a grandson of the schoolmaster and was married to Mary Cannon – my father’s second cousin. After all I heard as a child about schoolmaster O ‘Brien, his knowledge and his prophesies – its only now I know who he was, when and where he lived.

Cross Street was by far the most important and prestigious street in the town as evidenced by the type of people and houses there. It consisted of 62 houses – 8 of them 2 storey structures and in all 350 people. No. l John Lopdell (gentleman) with a staff of 8. No. 2 William Lopdell (his brother) and his nephew Ormsby Lopdell, with a staff of 12 which included gardener, steward, house servant, cook, house-maid, dairymaid, kitchen-boy, stable and cattle boys. No.20 (Roylans) had 14 occupants, No,22 – Anthony Smyth (another gentleman), No. 24 Cooney’s Hotel had 13 occupants.  No. 26 Lieut. James Browne, No. 27 Thomas Davis (gentleman), No,42 Dominic Burke (gentleman), No,43 – Brownes (two of them Anny Ofﬁcers), No. 50 Laurence Smyth (gentleman), No. 57 Thomas Mahon (Apothecary), No. 61 James Blake (gentleman and farmer) – a member of the famous Blake family. He lived there with his mistress (a local girl) and had three children – James, Mary and Katherine – who were baptised in the Protestant Church with all the pomp and Ceremony beﬁtting the great name of Blake. No. 8 – George O ‘Reilly, Schoolmaster was grandfather of Essie, Tom and Pat O’Reilly, and father of another great schoolteacher. I failed to locate the O’Reilly school-house, but it was said that it was away in at the back of Paddy Gardiner’s house. The second Mr. O’Reilly later became a National School Teacher when the school was built at the Ball Alley and lived in Finn’s house. He was a very ﬁne teacher, they said. No.5 and 11 two butchers (Flynn and Walsh), No.57 – Robert Irwin, Protestant Minister, then only 26 years, No. 16 John Mitchell (Publican), No.26 – Bill Kelly (shop-keeper) and lodging there was Lieut. James Browne of the 57 Reg. of Foot – the last Reg. to leave Abbey Row Barracks in 1819. Sixteen soldiers remained in Athenry and moved to 62 Cross Street. The rest of the Cross Street tenants were made up of Shoemakers, Tailors, Flax-Spinners, Cart-makers, Coopers, Mantua makers and Hatters.

The road went straight down from Cross St. to the pound, narrowing slightly at the end, and continued up by Ivymount to join the cross-roads. What is now the Avenue and Orchard of Town House was made up of garden plots. There was no road over the Prospect side and Clarke Street had not been built. The Old Road, then called ‘Bothar Árd’, went straight from Swan Gate through Eamon Brody’s land, and over to Castle Turbin. It must be remembered, that the roads at that time were little more than tracks. The laying of the railroads and the bridges changed the course of the road (1851-1865).

Those who had little houses in 1820 – and even in the l880s – could be numbered amongst God’s chosen people. A little home then was a luxury – providing shelter and warmth. The people living in make-shift cabins, camps and holes in the hills were the real pity. They were not included in the census.

Bunk-Beds, though supposed to be a modem invention, were used in Athenry in 1820. Made of four strong uprights, the double beds were of light pliable boards covered with straw-ﬁlled canvas mattresses. They were necessary to save space in the cramped living conditions. The Settle-Bed beside the fire was a necessity, and when folded up in daytime provided good seating accommodation for four or ﬁve. The loft was the warmest part of the house. People of those years were resourceful and had a great ability to co-operate and challenge the conditions of the time. Many were handy-men – able to thatch and do all sorts of odd-j obs. Rushes were plentiful, and when dried made excellent thatch.

At that time and into the 1880s, pubs were small, scantily furnished and stocked. Porter was the main drink at 2d a pint and 1d a glass (old pennies).

On race-days, sports and pattern days on the way to the Holy Well, a plank was set up on two empty half-barrels on the street, and the drinks served. Little obstruction was caused, as there was little trafﬁc apart from the ass and cart. On occasions such as these, they danced their feet off. Street musicians provided the music for a half-penny hat collection. “Puss-music” with spoon timing was popular. People made their own pastimes and pleasures, and had their own enjoyable carnivals – all at little cost.

Note: A mantua maker made ladies cloaks, gowns and shoulder-capes. No priest was listed for Athenry in 1821. The parish was administered by the Dominicans in Esker.

My father always said, that it was the Railway Station and Junction that caused Athenry to prosper. It must be said though that Athenry made great strides forward from 1660 to 1821 – before the railroads: The population ﬁgure is signiﬁcant (1093).

Galway in 1821, had widespread poverty and ﬁlth, with open sewers in many areas. It was a place of hunger, suffering and death by starvation.

There were no Catholic second-level schools, but two centres for the Protestants and the wealthy. There were few churches and no money to build them. The old Pro Cathedral was there, and the Dominicans, I think.

People were so poor that they were buried without coffins, wrapped in winding canvas, or such like. Children roved the streets in search of food. The begging carts were always on the move. Little girls hadn’t as much on them as would dust a ﬁddle. You can imagine what housing conditions were like when families were compelled to live in one room – often as many as ﬁfteen.

Galway fell asunder after the Cromwellian siege, and almost two centuries passed before the city started to make an upward swing.

All glory and thanks to the great men of the past, who by their blood sacriﬁce, and suffering raised the torchlight of freedom to make us what we are.

Lord Dunkillin’s statue at Galway was thrown into the sea during the war of Independence. The pedestal was placed in reverse somewhere near Castlegar inscribed “To the memory of all men who died for Ireland.’ Dunkellin was brother of “Clanrickarde the Infamous.” 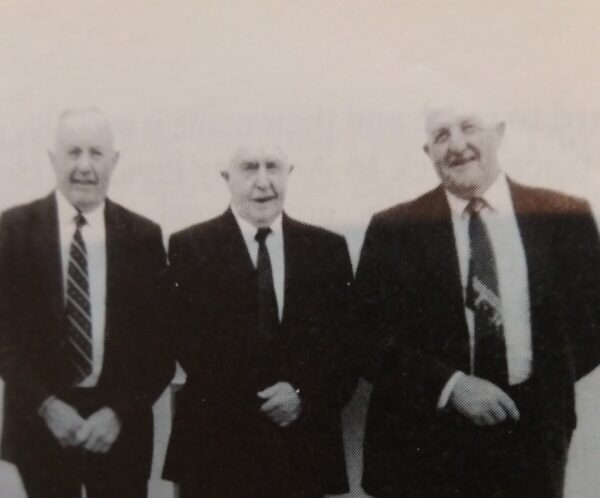