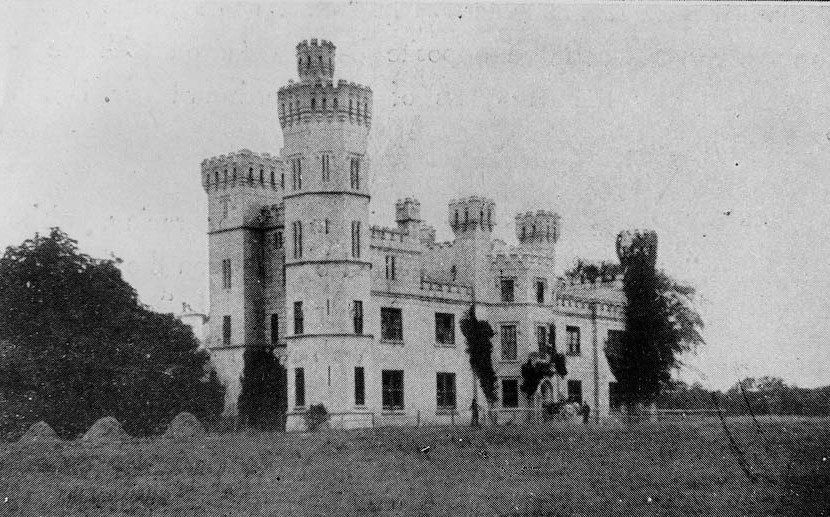 At Tallyhoe, less than three miles from Athenry the gates and ruined lodge at what was once the back-entrance to Moyode Castle are still to be seen, but nothing now remains of this once majestic home of the great Persse family. The gaunt ruins are remnants of a past world that the people of today will never understand. It was the world of the great Landlords, their castles and big houses.

The fame and grandeur of Moyode Castle stretched not only throughout Ireland but across the British Isles. It was a centre of attraction for the great Dukes and noblemen of Britain and Ireland.

What attracted the mighty and the great to Moyode? There were two contributing factors. One was the host and owner, Burton Persse, a man of exceptional charisma, who entertained lavishly. The other was the famous hunting-pack – “The Blazers” the private property of Burton, and kennelled at Moyode. In fact, for many decades, there were two packs there and in addition, twenty of the best-bred hunters in the land, specially reserved for the hunting enjoyment of the important guests.

The adventurous escapades of Burton, his dare-devil tactics on the hunting ﬁeld, the harum-scarum antics of this fun-maker made him the talk of every Big House in the land. Many tales still centre around this colourful man. The great Hunt-Balls and parties at Moyode were talked about for months afterwards, and even now, after a lapse of one hundred and thirty years, provide food for ﬁre-side stories in many homes. The pomp, revelry, and pageantry of those great gatherings could scarcely be surpassed even at the London Royal Palace. Can you imagine the spacious dining-hall, and ballroom, where the Connaughts and Edinburghs (sons of Queen Victoria), Clanrickardes, Dunsandles, Ashtowns, Clonbrocks and countless others dined, wined and danced?

At its peak Moyode had over eighty employees. Apart from its vast tillage and grazing areas, its stables and kennels, the Castle had its own forge and blacksmiths, saw-mill and carpenters, a large dairy-farm, and an extensive pig farm and butchers. Moyode, with its thousands of acres, was largely self-sustaining.

Burton Persse had a very good relationship with his workers and treated them well. It was he, who built the cottages at Sliabh Rua to accommodate some of them. To work at Moyode was to command a special status in the community.

How did the name “Blazers” come about? In the 183Os, when the Persses were entertaining another famous Hunt at a hotel outside Ballinasloe, there was a serious outbreak of ﬁre, so they decided to name the pack “The Blazers”. Burton was so popular, that his pack was the last in Ireland to be stopped by the Land League, and only then by extreme pressure from the top. The farmers were severely censured and threatened with the “Boycott”.

The last of the Persses (unmarried) died in Ballinasloe in 1935 aged 81. He too bore the name of Burton Persse. His remains were brought to Athenry Protestant Church during Minister Bomfort’s time, and buried in Moyode the following day. His death brought to an end the Great Perse Dynasty, that spanned almost two and a half centuries.

On limestone land this Castle stands

In years gone by it caught the eye

Of all that Heaven could be.

Along its sandy road,

When coach and four pulled to the door

Of the Castle of Moyode.

Its the polar-star of Galway,

Its the Bethlehem of my birth

Had Napoleon known its whereabouts

He would have headed West,

And left behind the Alpine range

‘Where the mercury skies had snowed,

And settled for a moon-lit night

O’er the Castle of Moyode.

The courtyard gate of spikes and plates

And O and Y are found in “Joy”

Which always seemed within.

When the cuckoo’s call came o’er the wall

As your axe you swung, and the echos ning

Through the Castle of Moyode.

The other O is a bullet hole

Pierced through an old ash tree,

And the archways in my childhood

And on the top there’s a weather-cock

there you ﬁnd the letter E

And all linked up together spells

The front gates at Esker Monastery, were once the two main entrance gates to Moyode Castle. (Taylors and Beimes gate-lodges). Although Burton Persse was one of the most popular of men, the same cannot be said of other members of his family. Many of them were hated for their cruelty. As a child, I often heard the old people express their hatred and condemnation of one Robert Persse, who had the heads of two little girls tarred as a punishment for taking two turnips from his ﬁeld on their way home from school.

My own mother couldn’t bear to hear the name of Persse. She told us the story over and over again of how her father was beaten by one of the Persses. It seems my grandfather was bringing a load of seaweed to the Athenry market, when he came to a sharp, steep hill near Ballygurane. The mare was heavy in foal, and he was obviously trying to zig-zag the load, so as to avoid the heavy pull, and rest the mare. Persse came speeding in his carriage, and seemingly had to stop or slow. He jumped, enraged from the carriage, grabbed the whip from the driver on top, doubled the stick and whip, and started belting my grandfather across the face. The poor man kept pleading with him. “Its the mare I was trying to save yer Honour, its the mare I was saving,” but Persse continued to vent his temper, with blow after blow. Notwithstanding all, my grandfather succeeded in holding on to the mare and saved her from falling. The horse and cow, were then the most valued possessions of every little home. Two men, travelling to Athenry on foot, came on the scene, and helped the mare and load to the top. My grandfather was so badly battered, that my grandmother failed to recognise him, as he pulled into the street in the evening.

There was a brighter side to the story of the gentry. They were not all bad. My aunt Mary, then a little girl of eleven, ran errands and did odd jobs for Colonel Davenport’s family of Ross Hill House. I do not know where exactly this house was, except that it was some miles across ﬁelds from the old home. Though only a youngster, she was a gifted cake-maker, and at the Colonel’s request, had to bake potato-cakes almost every evening for the family tea. The Davenports loved her, and the Colonel gave her father a large stretch of strand to gather sea-weed, and so help him raise his young family on a fourteen Irish acre holding. It was this sea-weed, he was taking to Athenry, when attacked by Persse. My aunt continued to work at Ross Hill House until she emigrated to America at a young age, and could never say enough in praise of the Davenports. Since I have given the story of the bad Persse, it is ﬁtting to include the story of the good Colonel.

Frank Persse, Moyode married a Miss Monaghan – a “peasant” girl of Templemartin. The marriage in the Catholic Church was based on true love and they remained happy to the end. They lived at Woodville House, near Kilchreest, and are buried together in the area.

Other branches of the Persse family lived at Persse Lodge, Castleboy House, Roxborough House (Lady Gregory was a Persse) and Sommerville House. The Distillery in Galway was owned by a Persse. They also had a big house in Galway.

Daly, Dunsandle, and Blakeney sat in Grattan’s Parliament. Talbot was elected for Athenry after the Battle of Aughrim and sat in James’ Parliament. I failed to trace him. It must be remembered that those were elected on a limited franchise. The plain people of Ireland had m say or vote in the matter. 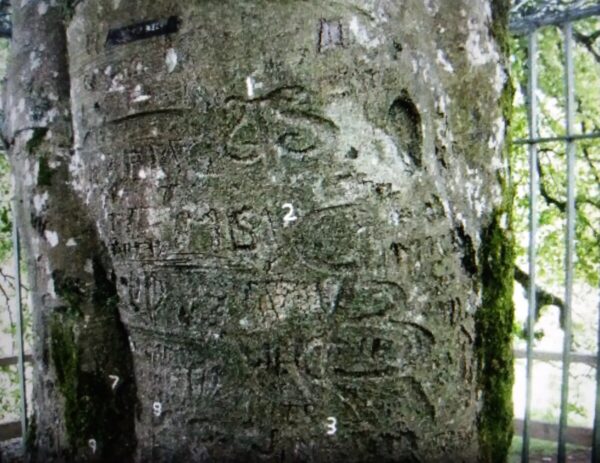 Jottings of my Life in Tyrone, Ireland – Strange Happenings

Strange Happenings One morning, when I was going through the woods, on… by Elizabeth La Hiff Lambert
General History Archive | Education, Folklore, History, People