Skip to content
Aggie Qualter – The Big Houses and More 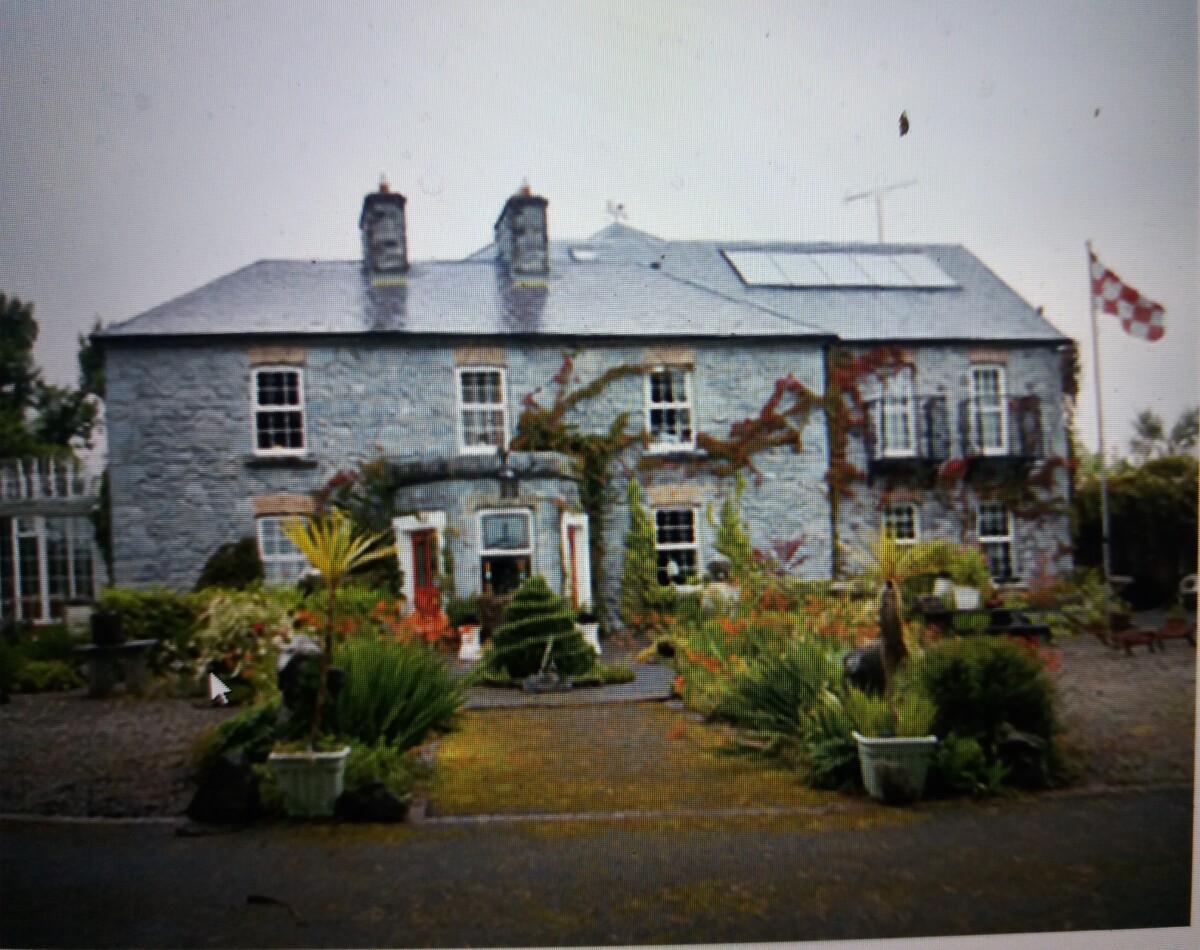 Rockﬁeld House was lived in by the Catholic branch of the Blake family. They had their own private chapel and resident chaplain. A spire and cross on top of Rockﬁeld House could be seen miles around. Blakes left Rockﬁeld about 1 850, when the Nugent a brother of the Earl of Westmeath came to live there. Lieut. Col Concannon was the next owner followed by Lord Blyth – an eminent doctor. Present owner is his son, Lord Blyth.

Mulpit: Many protestant families lived in this area:  Bradish, a school teacher at Rock

Lodge, now Finn’s. MacCoys at Mulpit House, now Donohues. McCoy (his brother) at Rockmore House, now Healys. Smyth at Wilmount House, now Tony Murphys. Turbin Smith at Castle Turbin House, now Cahills. Moneyteigue House was lived in by Davis and burned down by the I.R.A. Davis was a Catholic Landlord, but one of the worst. He was a hated man. He evicted 34 tenants and left them on the roadside. He was a Surgeon at Galway Hospital. 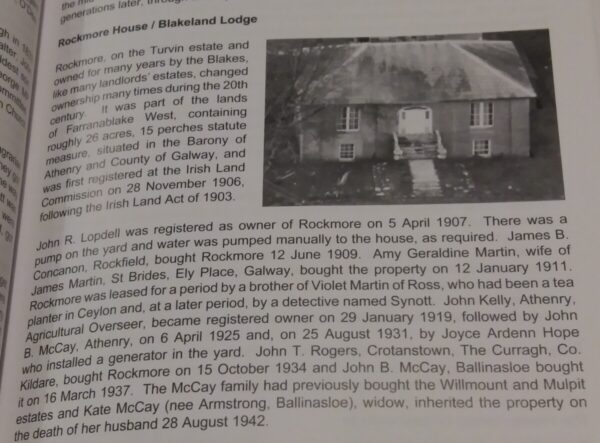 Moorpark: Frank Shaw -Taylor, was assassinated for refusing to give up the land. His wife was one of the Ushers. His brother, Shaw -Taylor of Ardrahan was the ﬁrst landlord in Co. Galway to hand over his land. Shaw- Taylor’s mother was a sister of Lady Gregory (a Persse of Roxborough).

Raheen: The Lopdells were not popular in Athenry. I heard my father refer to them as proper “Orange Bastards”. I then believed that they grew oranges at Raheen as I was unable to relate the word “orange” with “bastard”. Now know better. A Lopdell, who came here from the North, was the ﬁrst to put his name to the “Black Petition”. In fact, it was said that it was Lopdell’s brain child. “The Black Petition” (1845) was a “boycott” which came down heavily on Catholics. It urged Protestants not to give any work to Catholics, or to have any dealings or business transactions of any kind with them, and that Catholics must at all times be treated as social outcasts. It was a policy of “Apartheid” like that of South Africa. It seems the Orange religious hatred and bitterness was there then as now. This boycott of Catholics spread to other areas. The Lopdells had very high British Army titles like Colonel, Lieutenant, Colonel and Major. “Black Protestant”, an expression frequently used when I was young to describe those bigoted and anti-Catholic people, had its origin in the Black Petition.

Moyode: Mrs Burton Persse, Moyode Castle, opened a fund for the relief of Athenry people after the small-pox plague in 1875. All clothes and bedding had to be destroyed. A deep and long pit was dug on the west side of the B ack Lawn and Army Personnel moved in to carry out the work. The survivors feared that the smoke would cause another outbreak, but Dr. Leonard assured them that there was not the slightest danger. The fund was open to all gentry in the county. Subscriptions included £10 each from Lord Ashtown, Lord Clonbrock and Ffrenches of Monivea. All the others gave £5 each.

The Chapel Bell from the Old Belfry Tower could be heard throughout the parish. The Angelus brought a stand-still to all work and gatherings. Heads were bowed in silent prayer as the great tradition of Ireland’s Marian devotion was faithfully upheld by our people. Has the old order changed? The Chapel bell was hand rung by the Regan family for over a hundred years and never a second out of time. The youngsters around were allowed to dance in the Ball Alley for a half hour with the grown-ups, as Tommy Regan rang in the New Year. Michael (his son) followed. The last to hand ring the Old Bell was Nellie Regan. It is ﬁtting to pay tribute, across the great divide, to this lovely parish family, who left us such happy memories of the Chapel Bell echoing through the years. 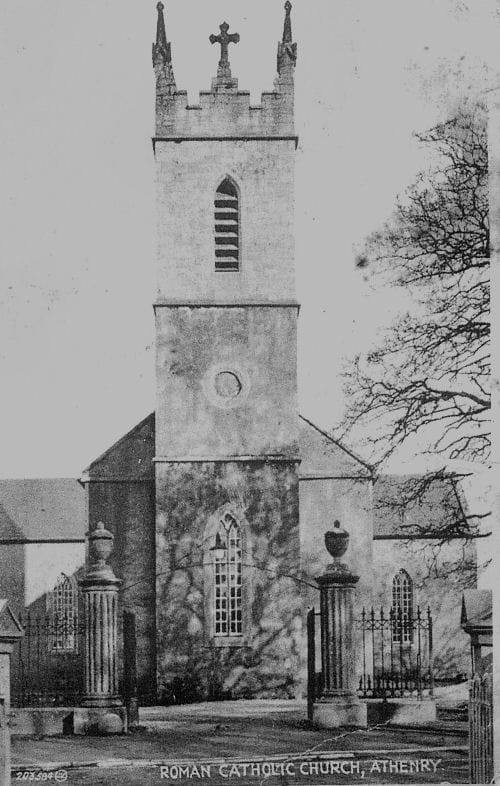 Alas the Belfry Tower has gone. Nothing now remains, but the photograph in the town library. Its absence has created a terrible void in the skyline. It was said that the Qualters, John Qualter was great grandfather of the late Paddy Qualter, voluntarily gave their time in the building of the tower.

Those of us who remember the tower must ask the question – How do the modern engineers and craftsmen of today compare with those of Victorian times? The answer is easy to ﬁnd.

Cromwell: When his army landed in Athenry the horses were stabled in the Dominican Abbey. It was a way of showing disrespect for sacred places. Some of the soldiers were also billeted in the jail as Athenry was then the site of the County Jail.

River Lane: Families who lived there in the last century were: Dileens; O’Briens; Martins; Connors; Murphys. The lane is now raised and integrated with the town park.

Mary Broderick S.R.N. nursed Tom Lambert of Burl Hall, Shropshire and formerly of Castlelambert. He was a lovely man, then over seventy years, and often spoke of Athenry with great affection. He told her that many a time he strolled down memory lane to wander around Castle Lambert where he was born and raised. He was married to a member of the Vaughan family. The Lambert vault is at Coshla graveyard.

Clanrickarde was described by William O’Brien as the greatest monster in recorded history. No words can describe the sufferings endured by the tenant farmers of Clanrickarde country during the land struggle. Many of the priests backed the people. One outstanding man was Father Fahy.

The Woodford Evictions stand out in history as the greatest resistance movement to Landlordism. The ringing of the old Chapel Bell at Looscaun was the signal for action. The people banded together, and fought bravely to save their little homes from the Battering Rams, often holding out for more than a week in an effort to break the Landlord power. Their indomitable spirit could not be broken. The Woodford people of today have every reason to be proud of their forbears.

1850 it was occupied by four Hanley families and was then locally known as “Hanley Land”.

One family of Hanleys emigrated and the farm was purchased by the Brodericks, parents of Fenian and Peter Broderick who were born there. Both of them were involved in all national movements – Fenianism, Land War, and G.A.A. The farm was bought by the Kennedys about 75 years ago. The late Eddie Joe Kennedy was the last owner.

Athenry Mart in 1985 had a turnover of 31 million – a great success story. Padraig Raftery, Coshla and the late Mattie O’Donnell were tireless workers and great organisers in establishing the mart in the town. It has become the leading mart in the west. 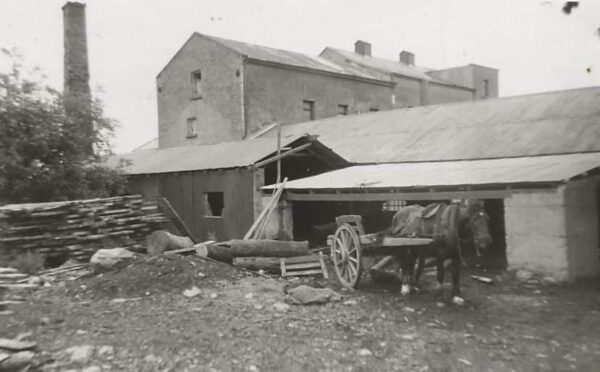 Athenry Mill: The Dominicans had a little grinding mill there many centuries ago. Sometime later Montgomery, a Protestant, became the owner, followed by Robert Irvine who made it a water-powered mill in 1866 when the river was diverted for this purpose. Finally, Samuel Taylor bought the mill around 1890. His sons Herbert and Charles were the last owners of the mill – now demolished.

King Phelim O’Connor of Connaught was slain in the Battle of Athenry in 1316, the bloodiest battle ever fought in Ireland. According to manuscripts of 94 unbroken generations held in Clonallis House by the O’Connor Dons 12,000 Irish were slain. A wonderful Television Documentary on Clonallis was shown in July 1986. A portrait of the King hangs in Clonallis Hall. He was only 23 years when slain. The defeat of the Irish at Athenry was the turning point in history. From then on Norman Power was secure.

Another famous battle was fought at Moyvilla in 250 near Athenry where Cormac Mac Art, Fergal (King of Connaught) and the sons of the King of Munster were slain.

The Wyndam Land Act 1903 brought 11 million acres of land to the ownership of the Irish tenants,  and a further 2 million through the principle of compulsory sale by landlords – in all 13 million acres. Davitt’s dream “The land for the people” – became a reality.

St. Bridget’s Church at Ivymount was the Church of the true Irish – the “native Irish” as they were then called. The Norman Settlers attended mass within the walled town. The town of the people, old Athenry, stretched out around New Ford, adjacent to the Church at Ivymount. This Church was in ruins in 1455. 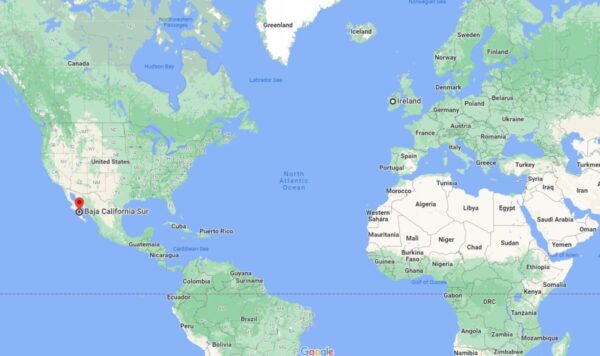