The Athenry parish church (St. Mary’s) was burned down by the sons of Clanrickarde in 1577, and so the town lost one of its ﬁnest medieval buildings. Indeed, after four hundred years traces of the architectural skills and craftsmanship of the time can still be discerned through its interlaced gothic arched windows, and stone setting. The destruction happened during the religious split, when protestant power was established in Ireland.

In time, the portion of the church facing the Square, not completely damaged, was repaired and used by the Church of Ireland, until the present Protestant Church was erected within the ruins of the Old St. Mary’s in 1828.

In 1780 Protestant rule held sway, and not surprisingly the Church at Athenry Square displayed much power and pomp. The Protestants were the only ones that mattered. The Catholics of the parish were on their knees, with no hope for the future. These conditions continued until religious freedom was restored. The Land War, and the Acts which followed, somewhat lifted the yoke of oppression, and lightened the burden of our rural people.

The Protestant Church reﬂected its grandeur through those who attended – the Landlords, the titled gentry, military ofﬁcers and their families, and a sizeable Protestant population, who apart from the landlords, held large stretches of land in the area. All worthwhile jobs were held by Protestants. They were the pillars of British power in Ireland, and had the best of all things.

Births and Baptisms registered at Protestant Church 1796-1828 numbered 210. Marriages registered numbered 84. Isabella Lambert, whose birth was registered at Athenry in I823 was mother of Edward Carson. His father was a successful Dublin architect.

Smallman was the Clerk of the Church – an important job in these years.

The recent cleaning up of the church grounds unfolds much local history covering a period of two hundred years; establishing many past links and for those who are old, reviving memories of the Big Houses and the great Landlords.

Many of the old Protestant tombstones go back as far as 1760. One to Rev. Lewis Clarke, who died in 1779, stating he was ﬁfty years curate of the parish, puts his appointment to Athenry at 1729. The Lopdell plot – To John Lopdell and his wife Deborah – is dated 1764. A son of John Lopdell aged six years died at “Riverview” 1831 (Town House). They moved to Raheen House in 1871. The oldest gravestone I found is inscribed with the name Hesin 1681. There is a railed headstone outside the Church (North) to Peter Fitzwalter Lambert, Castle Ellen House, 24th February, 1891. He choked on a bone while dining in a Tuam Hotel, aged 45 years.

Two headstones to Concannons, Rockﬁeld House – one to Blake Concannon, 1919 and another to Bertha Rockford Syrret, wife of Edmond Lieutenant Colonel, aged 42 years. The Concannons were a popular family, and never objected to people walking or cycling through the estate.

On the east side of the church there is a beautiful headstone with an angel to Vera Cecilia, child of Agnes and Frank Shaw-Taylor of Moorpark House, died February, 1914, aged eleven years. She was a lovely little girl. She loved riding and often came to church on her pony. While practicing at the jumps around Moorpark her pony bolted, causing her to fall. One foot caught in the stirrup and she was dragged half a mile by the runaway animal – a very sad event.

Tomb with Obelisk – I failed to ﬁnd the name of the obviously important family buried there. The inscribed slab could not be found. There were at least three skeletons in the tomb – all reverently reburied. It could be the tomb of the Blake family (Protestant). There was no obelisk on the grave, when I was a child. It was found in the course of recent excavation work.

Unfortunately, the church was vandalised many times in recent years. In 1983, one could describe the church as a “write off’. With all the valuable stained-glass windows destroyed, and many wall-plaques, erected to the memory of the landlords, removed. The beautiful triple high altar window ( a special work of art, now ruined reads:- “This window has been placed in this church to the glory of God in loving memory of my beloved father, mother, sister and brothers – Burton A. Persse”.

Two stained glass windows facing north are dedicated to the Lamberts of Castle Ellen, and Castle Lambert – one totally destroyed. The other reads “In the glory of God, and in loving memory of P.F. Lambert, died 1891 erected by his mother”. Windows to Halls (Knockbrack), and Lopdells (Raheen) 1890 on south side are destroyed. The wall tablets removed include those to Shaw Taylors, Binghams (Ivymount House) and Halls (Knockbrack House).

The high altar tablet reads – “In remembrance of my beloved wife Eliza, who fell asleep in Jesus aged 21 years. This tablet is placed by her faithful and loving husband Giles Eyre Clarke, curate of this parish on the 30th day of January, 183l”. There are two tablets to Persses – one to Theophilus S. Persse, 4th son of Burton Persse, aged 29, died at Malta 17th December, 1863. Another tablet to Charles G. Persse, 5th son of Burton, died 19th September, 1892 and wife Alice, daughter of Thomas Richardson, Tiaquin House, died March, 1880. (These tablets are by Coates of Dublin, Church Furnishers).

I researched the church in May, 1986, when the cleaning of the grounds was under way. The church could then be described as derelict. Now thanks to the Project Society, a newly formed organisation that plays a big part in promoting the spirit of co-operation in the community, the church is completely restored, decorated and used for cultural purposes.

The Project Society deserve praise, appreciation, and thanks for all the effort, skill, and time put into this great work. The result is impressive, and must be seen to be believed. There is a beautiful polished ﬂoor and seats, with toilets, wash-basins and electricity installed. The church is certainly an ‘eye opener’ for all and a glowing example of what cooperation, and a ‘do it yourself’ policy has achieved for the town community.

The new windows in the church were donated by the following: Treble High Altar Window – Athenry Credit Union; The four aisle windows – Frank O’Neil, Frank Brody, Josie Murphy (Arch) and Athenry Mart. All the windows were ﬁtted by John Lawless.

Only one wall plaque now remains – Lopdells. All the others, of equal beauty, have disappeared.

The surround of the church gate (Square) is made from the stones of the Old St Mary’s. 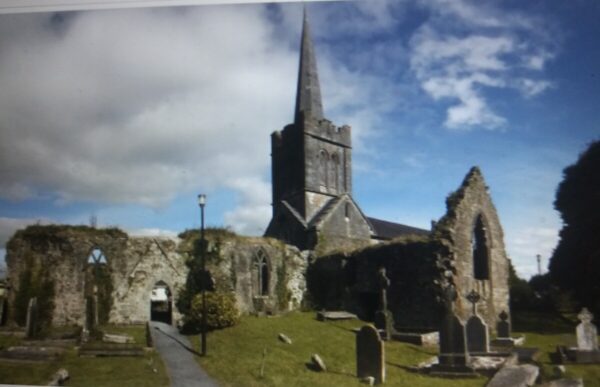