Skip to content
Aggie Qualter – The Trial of Peter Barrett

Windows to the Past – Athenry parish has given many famous people to Church and State. In the ﬁelds of Literary achievements, scholarship, drama and sport, they have won national and even international acclaim, but for reasons completely different to any of those, the fame of one man from this parish echoed around the world – the name was Peter Barrett of Castle Lambert. In the year 1869 Barrett was the central ﬁgure in one of the most famous and controversial trials of Irish History. He was charged with the attempted assassination of Tom Lambert, the Landlord of Castle Lambert. If found guilty he faced certain death by hanging – the punishment suffered by Anthony Daly of Seaﬁn some years before.

The parents of Barrett lived on a small holding on the Lambert estate, now known as “Barrett Hill”. They were evicted by the ‘Tyrant’ and left on the roadside. Peter, their son, then working in a London Post Ofﬁce, learning of his parents’ plight, set out on his journey of revenge, and armed with a revolver headed straight for Castle Lambert House. Athenry was his nearest stop, but he continued to Oranmore where he might escape recognition and on foot went through Glanascaul and Lisheenkyle. However, as he crossed a stile, he was observed by two boys playing ‘pitch and toss’, and at Frenchfort he called at Murrays’ house for a drink. Mrs. Murray gave him a mug of milk and bread. Barrett was so thankful, that he gave each of her children a piece of silver. She told others about the “generous caller”.

Later the police heard the story, and summoned her to identify the man. These three people, played vital pans at the trial that followed. On reaching the private grounds of Castle Lambert House, Barrett hid in a lime tree opposite the great door. It provided a view and cover. A house party was in swing. He waited, then came his chance more favourable than he had anticipated. The door opened, and Lambert emerged alone. After the wining and dining he needed fresh air and a stroll down the avenue. Barrett tailed him, waited for his return and ﬁred at close range aiming straight for his heart. Lambert slumped and Barrett leaving him for dead made a quick getaway.

By a twist of fate, the gold watch in Lambert’s breast pocket stopped the bullet. He was unconscious for some time but recovered, and crawled to the Big House where he told his story. The hue-and-cry was on.

Meanwhile Barrett, who was a ﬁrst-class athlete, standing six foot two and as ﬂeet footed as a deer, made the cross-country run to Athenry. He knew every mass-path, ditch and gate on his run and arrived in the “nick of time” to step on the night train to Dublin. Lambert in his statement to the police said, “I did not see the man but if Peter Barrett is in the world it was he who ﬁred in retaliation for the eviction”. Barrett was arrested at Dublin and brought back.

Money poured in from America for his defence. Isaac Butt, the defender of the Fenian leaders, acted as his Senior Counsellor and McDermott, an equally brilliant lawyer, as his Junior. The case opened at Galway. It was the trial of the century and attracted world-wide attention.

Barrett stuck ﬁrmly to his statement, that he was not in the Castle Lambert area on the night of the shooting. Large sums of money were offered to witnesses to prove the contrary. No one “guggled” but one of the pitch and toss boys, who swore that he definitely identiﬁed the man who crossed the stile as Barrett. The other boy with equal conviction swore he was not Barrett. Mc Dermott handed his hostile witness a needle and thread and requested him to thread it. After several attempts he failed. He handed the same needle and thread to the other boy, and in a ﬂash he succeeded.

What of Mrs. Murray? She was a God-fearing, soul-searching woman, and carrying her ﬁfth child. She sought a Confessor at Galway, a Dominican.

The story told was, that the priest wore his stole, and said to her “You came to me for advice not Confession, because you have no sin to confess. We cannot judge Barrett’s intentions. Only God can do that, but one thing is certain, Barrett took no man’s life, and if you can save his life, it is your duty to ‘do so’. When asked in court if the man in the dock was the man who called to her house, she’ replied ﬁrmly, “No Sir, he is not the man”. This was the answer that Ireland waited for and wanted to hear. It was the answer which went eighty per cent of the way in swinging Barrett’s life away from the scaffold, and to freedom.

The Jury was in disagreement and after many months Barrett faced his second trial at Dublin. Again, the Jury failed to agree. After almost twelve months in Jail, Barrett was brought to trial for the third time. His innocence or guilt had to be finally decided on one point, twelve minutes had elapsed from the time Lambert’s watch stopped until Barrett stepped on the train at Athenry. Could he have made the run in that time?

Was there even the remotest possibility to have done so?

By their handling of the Barrett case, Isaac Butt and Mc Dermott made legal history. Their wizardry and strategy broke down the arguments of the most eminent Crown Counsellors in the British Isles. Those two men were absolutely dedicated to the cause of freeing Barrett. For eloquence and forcefulness Butt’s ﬁnal speech was described as the greatest court oration ever heard in Ireland. The day was won. The Jury disagreed for the third time and Barrett walked from the Green Street Court a free man.

Ballads were composed and sung around the Irish Hearth-Stones. As a child, long ago, I remember one something like this.

Some twelve long months he served in jail to break the landlords’ might.

Now all ye sons of Erin wherever you may be

Give three loud cheers for Barrett and his Great Court Victory.

After the trial Barrett left Ireland for America, where he got a hero’s welcome. He was very successful in the new world. Some years later he visited his life-long friend, Batty Corbearsy, St John’s, later Finns. He spoke freely of the trial, and the woman who saved his life. Did he make the run in twelve minutes? “Certainly not” – he said it took him twenty ﬁve minutes at least. God was doubly good to him.

(i) Lambert’s watch withstood the initial shock and continued ticking for at least ten minutes.

(ii) The Station-Master at Athenry, in order to cover up for some man at Galway, logged the time the train should have arrived, when in fact it was almost six minutes late. The driver made up the time-loss before reaching Ballinasloe and the Station-Master stuck steadfastly to the time entry.

What of the revolver? It was the missing link in the murder chain. All the Peelers of Ireland combed every square foot of ground from Castle Lambert to Athenry. He hid it in a rabbit burrow on a small sand-hill about a quarter mile from the “Big House”, and thirty or forty yards off his run and not far from a Sycamore tree. His greatest problem and delay he said was searching for the right make of warren, knowing that, in order to surface in the morning, the rabbits would keep scraping the sand from below causing the revolver to sink deeper in the ground.

Today “Barrett Hill” is a permanent monument to his memory, but let us remember with pride that at Castle Lambert in July 1869 Peter Barrett struck a blow for the Tenant Farmers of Ireland, against the evil and tyranny of Landlordism within our shores. “Go ndéanfaidh Dia trocaire air”.

Author’s note: Before her marriage, Mrs Murray, Frenchfort, was a member of the Burke family Lodge, Athenry.

Click on the Author’s name, below, to find more articles from Aggie Qualter’s book! 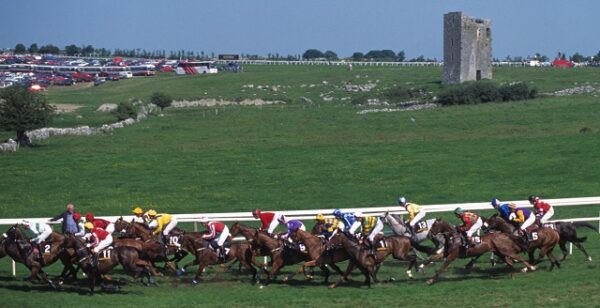 Jottings of my Life in Tyrone, Ireland – Horse Races