Few counties suffered as much as Galway during the struggle for Independence. Our high proﬁle in 1916 ensured that we were ﬂooded with troops Tans and R.I.C., Auxiliaries and Regulars, when the ﬁght was resumed.

About thirty people in all gave their lives in the years 1920-21. The best known of those are Fr. Michael Grifﬁn of Gurteen, Louis Darcy of Headford and Joe Howley of Oranmore, both high-ranking ofﬁcers in the I.R.A., Michael Walsh, an elected Sinn Fein member of Galway Corporation and the Loughnane bothers of Shanaglish.

Our parish was not spared its share of sorrow. On October 24,1920, the forces of Law and Order burst into the home of Tom Egan at Cashla and shot him dead on his kitchen ﬂoor. His wife, with their youngest daughter in her arms, pleaded in vain for her husband’s life. He had been intensely interrogated after the shooting of Shawe-Taylor in March but insisted that he had seen or heard nothing. Others, living farther away from the scene, subsequently admitted that they heard shots. Tom Egan’s silence left him a marked man, and he paid for it with his life.

One of the last Volunteers to die in this phase of the struggle was Bill Freaney. He tragically lost his life at the Gentry’s tennis and cricket pavillion at Athenry on the night of June 30, 1921. A pavilion was erected there for meetings and entertainment of the club members, who were the staunch supporters of British Rule in Ireland. The pavilion was a potential billet for Crown forces. Members of the I.R.A. travelled cross country equipped with a supply of petrol. The pavilion was well sprinkled; young Freaney went to the cellar doing a similar job. One member sprinkled petrol on the east side to a distance of twenty yards – all were ready for a quick get-a-way! When all were believed to have been outside, a lighted match was thrown on the grass. Within seconds the pavilion burst into ﬂames trapping young Freaney below. When clearing the rubble human remains were found, but all was silent. If the name was divulged, the result would be carnage. The Tans would bum all Derrydonnell. The victim of this terrible tragedy was buried in St. Mary’s graveyard marked “the grave of the unknown warrior”. Some weeks later, the Truce was called and everyone believed that the Irish question would be ﬁnally settled. The remains of Bill Freaney were exhumed and he was given a public funeral with full military honours. It was miles long – the biggest funeral ever seen in the parish. As a school girl I was standing at Glynn’s corner watching the cortege go by – his mother a sad sight on a side-car, followed by his beautiful girl-friend. The sympathy of the by-standers went out to those two. Fenian Broderick, then an old man, was standing nearby. He struck the road with his stick and with great emotion said “I never thought I’d live to see this day. It’s a sad day for Athenry but a great day for Ireland. Our great men have not died in vain.” He believed as did all others that the sun would soon rise on a free and united Ireland. It was not to be. Bill Freaney rests in Teampeall Geal graveyard, Derrydonnell. 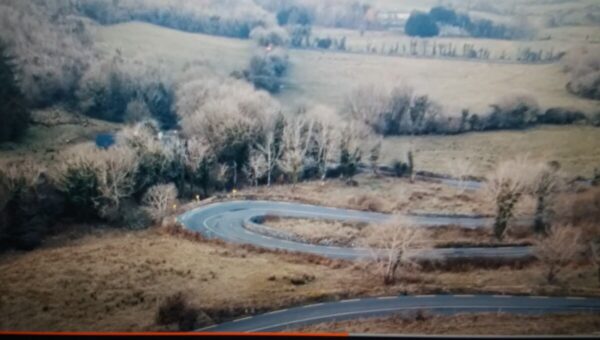 Jottings of my Life in Tyrone, Ireland – Corkscrew Hill Legend