This is an All Ireland Prize-Winning Ballad for 1983. It was composed by Tony Waldon, Kingsland, Athenry

“The Fields of Athenry”

To while away those leisure hours before the close of day.

When my mind began to wander back to days long gone by,

When I roamed as free as gaoth na síogh o’er the Fields of Athenry.

Oh! how often with our dogs and sticks before the break of day,

To hunt the rabbit and the hare ‘till the moon rose in the sky,

Oh! these were happy days we spent round the Fields of Athenry.

We had some famous hunting dogs, I ’ll mention but a few,

We had Speed and Spot and Rebel Brave we had noble Murry too,

But Brute he was the king of all as o’er the sod he’d ﬂy,

And ’twas woe betide the hare that strayed round the Fields of Athenry.

Across the bogs to Poll Mhic Eoin by Cahertubber Lake,

And then we’d climb Cnockan-Cabhair, the lights of home to spy,

and hear the curlew’s plaintive call o’er the Fields of Athenry.

The gravel-trucks have hauled it off to Galway City fair,

To make concrete for foundations, and the fairies had to ﬂy,

Before diggers and bulldozers in the Fields of Athenry.

All through the long hot Summer days through these green ﬁelds we’d stray,

The youthful blood coursed in our veins and death seemed far away,

We thought we were immortal, that it’s just the old that die,

On that hallowed hill above the town its there I will be laid,

But when the ﬁnal judgement comes with its fanfare from the sky,

I will rise up then and hunt again through the Fields of Athenry.

At the All Ireland Festival, this ballad was sung, to music of his own composition, by Sean Flanagan, Craughwell. Sean is a famous Irish traditional musician, and ballad singer. 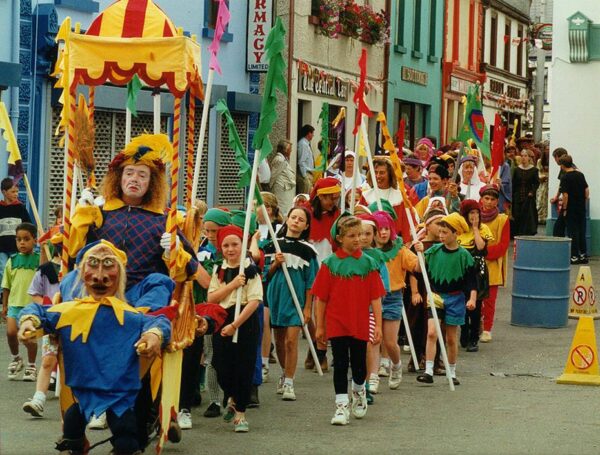 Would we extend the festival to ﬁve days? Could we sustain it? Could w… by Mary McGovern
Athenry Journal Archive | Art, Drama, Education, Entertainment, History, People, Sport