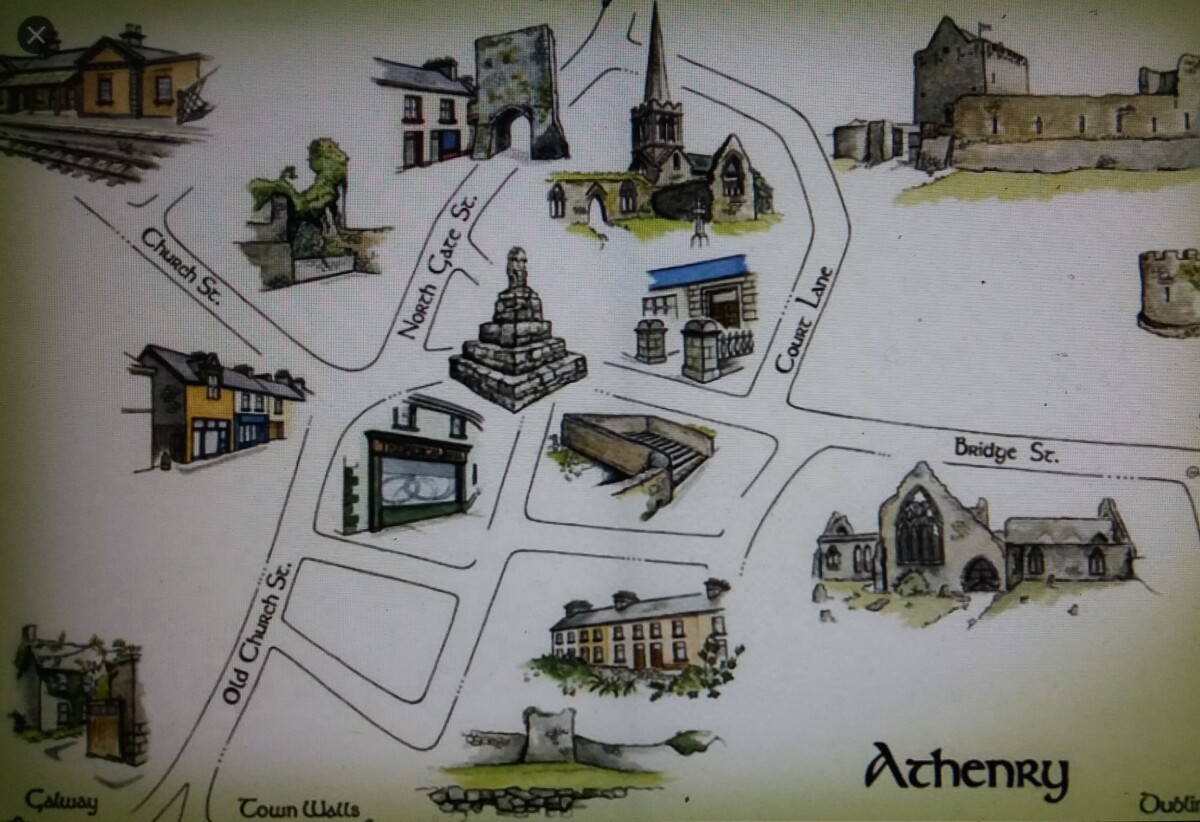 The name of the town is an Irish one, Baile Átha ‘n Rí, thus indicating that the ford there must have been of importance in pre-Norman times. As no kings of any note are known to have been connected with the area at any time, the name should perhaps be translated as ‘River Ford’ rather than as ‘Kings Ford’, rige being an ancient Indo-European word associated with rivers. The river at Athenry is ‘The Clareen’ which, in turn, gives its name to Clarenbridge where it enters the sea.

The history of the town can be seen through its monuments. The earliest remaining building in the town is the Castle, built at the ford by Meiler de Bermingham, probably shortly before 1240. This castle, one of the finest 13th century castles remaining in Ireland, now consists of a three-storied keep (the gables were added to its top during the 15th/I6th century) surrounded by a strong curtain-wall which had two corner-towers and a corner-buttress near the strongly fortified gate – the keep not being centrally placed, but overlooking the curtain-wall at the north-east, obviated the necessity of a defensive tower there. Athenry Castle has being restored by the Office of Public Works.

Meiler de Bermingham also caused the Dominican Priory of SS. Peter and Paul to be erected in Athenry. The Priory was started in 1241 and finished in 1261; Meiler died in 1252 and was buried there. The Priory underwent various destruction’s, burnings, restorations and enlargements during its long history, the various phases being clearly apparent in the different architectural and sculptural styles to be seen in the present ruins. The Priory still contains much of note, particularly important being a fine collection of 17th century graveslabs and wall-plaques. Some of these are particularly interesting, notably the graveslab of John Burke and his wife which bears the date 12th October 1627 and also some fine interlaced work typical of the ‘Celtic Renaissance’. Also worthy of note is a slab dated to 1631 which has not only some interlace carved on it but also an axehead and some other tools. Likewise of special interest is the graveslab dated 1682 commemorating a blacksmith called Tannian which is not only carved with a large cross, but also with two bellows, a horse-shoe, an anvil, a hammer, and a pincers. Other graveslabs have carvings of ploughs or parts of ploughs, thus indicating the farming status of those commemorated.

The walls of Athenry are easily the finest medieval town-walls remaining in Ireland. A three-year murage grant being obtained in 1310, it would appear that the town was originally walled in or about that time. History, however, records that the town was walled after the Battle of Athenry on the 10th of August 1316, when the Anglo-Normans under William de Burgo and Richard de Bermingham severely defeated Phelim O’Connor, King of Connacht, who was aided by the Princes of Thomond, Meath, Breffny and Commaicme, the defeat seriously affecting Edward Burce’s Irish campaign. The record may, however, merely mean that the walls were rebuilt of stone, the earlier walls being most probably of wood, or, alternatively, that the existing walls were fortified by the addition of wall towers. 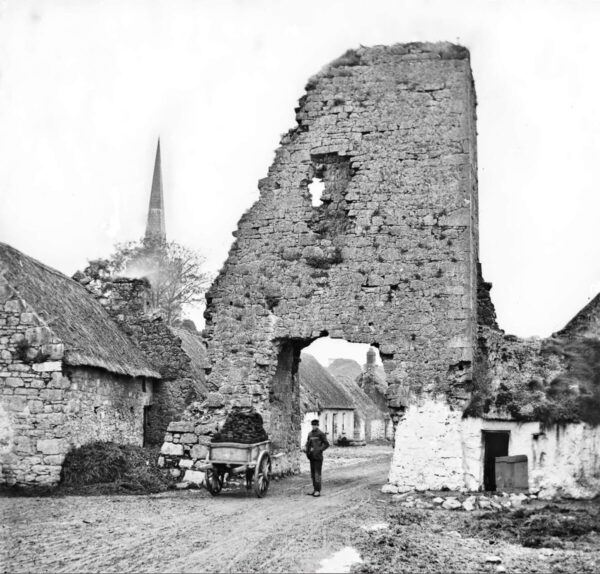 Only one of the five town-gates now remains, the North Gate, and it may be a late 16th or early 17th century addition. Most of the wall still stands, together with five wall-towers (the footings of a sixth were accidentally destroyed some years ago). The town-walls of Athenry were not of a good military character being very thin, but nonetheless they had ramparts on the top; the main defense, however, was a deep and wide moat, traces of which can still be seen outside the walls. The walls, towers and moat, were built to provide protection and to lend status to the town.

The remains of St. Mary’s Collegiate Church, the former parish church of Athenry, dates from the mid-13th century. It has often been incorrectly identified as the remains of a Franciscan Friary, due to a 17th century mistranslation of the Latin name for Adare, Co. Limerick. Apparently founded about 1240, it became Collegiate by order of Atchbishop O’Murray of Tuam in 1484; it was destroyed in 1574 by Earl of Clanricard’s sons. In 1828 a church with a particularly elegant spire was built in its chancel and was in use by the Church of Ireland until very recently.

In 1629 permission to hold a regular market and a fair in October was granted to Sir William Parsons, Bart. The market was held each Sunday within the town, at the spot where the remains of a very fine market cross still stand. This cross is unique in Ireland, being of “lantern” or “tabernacle” type, and it dates from the late 15th century. The fair was held immediately outside the town-walls, close to the gate leading to Galway. The side of this fair is marked on old maps as “Parson’s Fair Green” and can be located by a large stone which has a rectangular socket cut into it, obviously to take a cross at which bargains would be sealed.

In February 1597 Red Hugh O’Donnell sacked the town, following which Athenry descended into a continuous decline – briefly halted in 1644 when the Dominican Priory was revived as a University – to be finally put down by the Cromwellians in 1652. The coming of the railroads in the 19th century, making Athenry an important junction, revived the town, and it has ever since then been slowly finding its way back to its former importance. 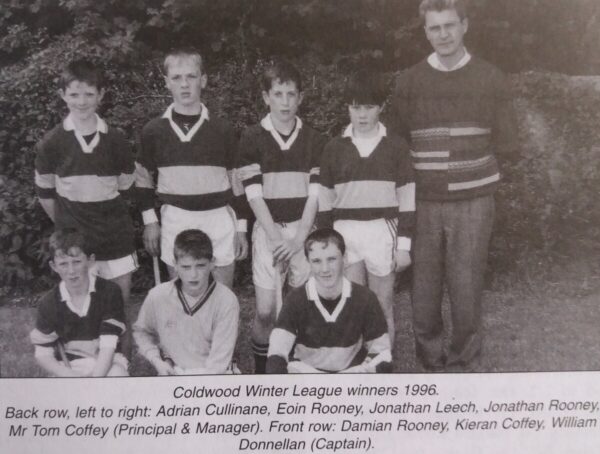