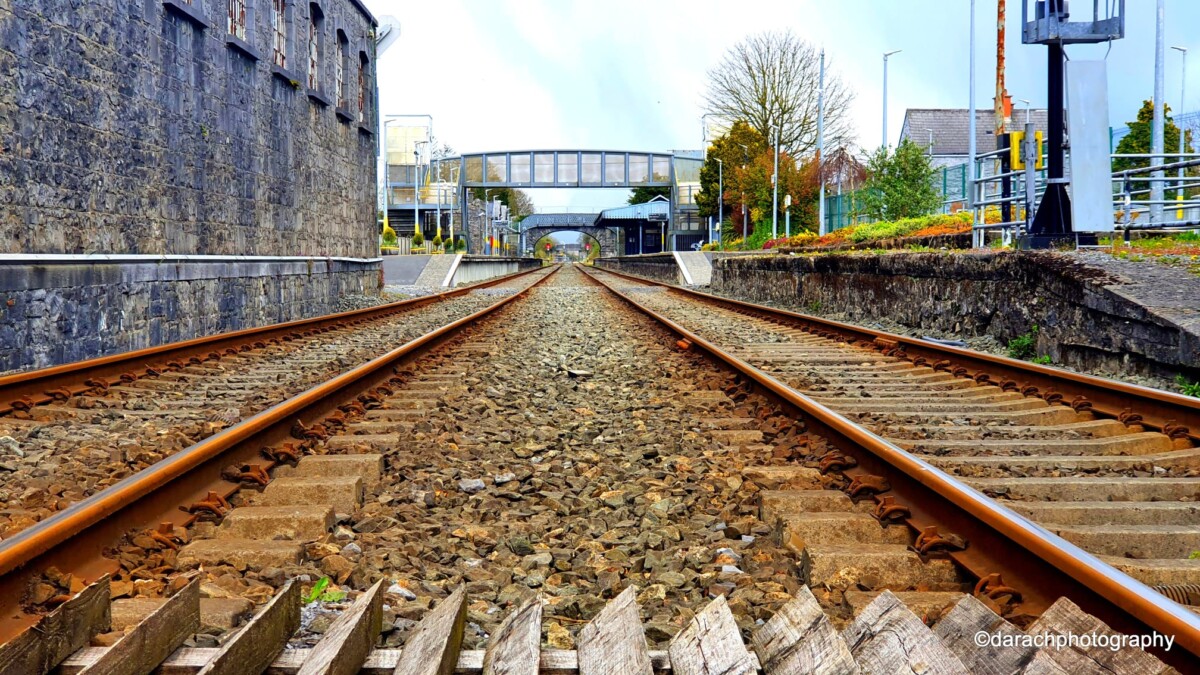 In 1851 The Midland Great Western Railway opened its station in Athenry.  The line was extended from Athenry to Galway completing one hundred and twenty eight miles of railway. At that time there were great hopes of developing Galway as a major transatlantic port using Lever Line ships. However the Great Southern and Western Railway had more influential backing and Cobh in Cork was selected as the transatlantic port.

The down platform had a nameboard stating Athenry and Ennis junction and the up platform stated Athenry and Tuam Junction.  The signal cabin contains sixtyfour levers – one of the largest cabins in the West of Ireland.

The arrival of the railway was a major advancement in travel for passengers and freight replacing horse and car transport and barge movements for freight. Finance for these various routes was raised by the gentry and every effort was made to accommodate the laying of the track adjacent to the “Big Houses” as can be seen at Belleville and Woodlawn.

A glance at the railway network map at the end of the last century showed the country very well served by various companies with most places not more than a few miles from a railway station.

During the mid 1850s there was intense interest in extending railway lines and the people of North County Galway were no exception.  In 1854 a committee was formed to connect Tuam and Athenry and in 1858 a bill was lodged in the House of Commons to construct a railway called the ‘Athenry and Tuam Railway’: A & TR.  Gentlemen named in this bill were: Denis Kirwin, Martin J. Blake, Charles Blake, Robert Henry, John W. Cannon, John Stafford Kirwin, and David Ruthledge.  The intention was to use the facility of the Midland Great Western Railway at Athenry.

Tle House of Commons passed the Bill, and when it came before the House of Lords there were two objections: one from M.G.W.R. who generally objected to any development which might affect its own plans, and the second from Lord Lucan who felt the Tuam line may affect his plans for the Mayo Railroad.  The objections were overruled and an agreement was reached whereby the Midland Railway would operate the Tuam line for ten years paying a sum of £400 per year for the facility.

The Bill became an Act, the cost of construction being estimated at £90,000.  Shares valued £10 each being issued and borrowing of £39,000 also being available.  The Act stated the junction be at the eastern end of the Midland station and the terminus at the Galway Road in Tuam.  The Board of Trade demanded bridges to be built suitable for a double track and throughout the section of line where possible bridges instead of gates be built.  This development can be seen at the metal bridge at Caheroyan where the stone bridge on the Tuam line is obvious. Facilities for booking and other office work would be provided by Midland.

In March 1959, William Dargan was appointed as contractor and this was very warmly received as Dargan was well known as a capable contractor.  Dargan purchased considerable shares in the A&TR. 750 men worked on the construction and the rails were imported to Galway and taken to Athenry by the Midland.  Tuam station was built by a local contractor for £4000.

Rapid construction took place and by 19th September 1860 the line was completed well ahead of schedule and was inspected by Captain George Ross R.E. from the Board of Trade.  He was very satisfied with the work performed as the bogs had been suitably drained to allow the lines through the bog to be as stable as any other portion.

On September 27th 1860 the first passenger train departed to Tuam and the shareholders were asked to subscribe £1 per share towards a testimonial fund for the A&TR Chairman Denis Kirwin and £250 was collected.

On the 15th of January 1993 a 50th Anniversary occurred in our parish… by Paul Browne
Athenry Journal Archive | Education, People