On Friday 27th November 1992, following a public meeting which was held in Hanberry’s Hotel, the Athenry Tidy Towns Committee was formed.

The basic aim of the committee is to improve the appearance and character of our town. Our town which we all know is full of history, It possesses important historic monuments, the most notable being, King John’s Castle, which was recently refurbished and is now open to the public. Indeed, among Irish towns, this town is unique in the quality and character of its historic monuments and it has the potential to be one of the tourist show-pieces in the country.

The committee decided that their first task would be to enter the National and Local Tidy Towns Competition. By entering these competitions we would get a feedback from the adjudicators on how we were performing; how we rate with other towns our size and most importantly the steps we should take for improvements.

The second task was to draw up a five year Improvement Plan and the framework of the plan was based along the categories in which Tidy Towns are adjudicated.
These categories are:

The committee has now completed two years of its work in the furtherance of its Five Year Improvement Plan and we are making progress. The most notable achievement in the first year was in the National Tidy Towns Competitions. The committee was awarded First Prize in the new entries category. In last year’s competition the adjudicators said that litter problems in the town are now under control. This is very gratifying to us as Phase 1 of our Improvement Plan is now complete and we can now embark on making our town a Litter Free Zone area. One of the most notable achievements in Phase 2 of our plan for last year was in the “Awareness Campaign” and “Presentation of Buildings”.

The involvement of our youth and school-going children in helping to keep our town litter free was the main anchor in our Awareness Campaign with the following plan of action geared towards them was as follows:

The committee to organise a competition for the best kept street -free of litter.

An awareness campaign to be set in motion depicting same and Trophies to be awarded as prizes.
As part of the awareness campaign, competition forms were distributed to all the school principals. The streets of the town were divided into four areas and each school was given its own area. The clean ups took place every Tuesday and Thursday evening.

The competition was overseen by Mrs Peggy Farrell who kept a progress report for each week during the competition and the main emphasis was put on participation. The overall winners of the competition were The Girls National School, Scoil Croi Naofa. The best individual participant was Alan McNamara.

The level of participation was very heartening and the main adjudication was carried out by Miss Ann Melia of An Bord Fáilte. She was very impressed with the floral displays and overall appearance of the participating premises. Trophies were presented to the winners last October.

Phase 3 of the Improvement Plan which was prepared earlier this month will be geared towards completing works not yet finished which are The Railway Embankment and the Island at Prospect.

In conclusion, I would like to say, if this committee adopts the same coherent and coordinated approach and continues on with the good work of implementing its Five Year Improvement Plan, then this town of ours, “Baile Átha’n Rí” will be all the better for its endeavours. 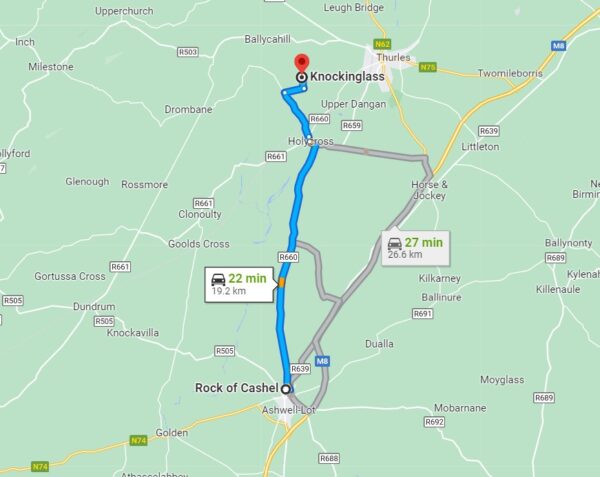 Jottings of my Life in Tyrone, Ireland – My Sister Nora and Aunt Aggie