The Athenry Tidy Towns Committee has once again been very heartened with its results in the 1995 National Tidy Towns Competition. Despite entering a new Category, namely Category D, we have succeeded in increasing our marks by four over last year’s Competition.

The six categories in which the Progress Report was based on are namely:

The adjudicators’ comments under the said categories were as follows:

Thank you for the very comprehensive details of your work programme. You have succeeded in maintaining the high standards which you achieved last year. It is evident that there is a high level of commitment within Athenry at present. If you sustain this rate of progress over the coming years and adopt and implement all aspects of your Five Year Improvement Plan for the town, you will steadily progress to being among the top entries in the competition.

We were very disappointed at the amount of litter that was evident on adjudication day. It was Sunday afternoon when we visited Athenry and given that Saturday night was busy in the town; people should have cleaned outside their premises first thing in the morning. This was disappointing especially as it was stated last year that you had the litter problem under control. This is one area that will have to be addressed in your town. It is a problem that can be rectified without any cost to the community. Just educate people that litter and in particular street litter must be placed in litter bins and not dropped on the streets. On litter bins, the business sponsored bins all look very good and all of the existing yellow ones should be replaced with green bins.

There is a very good effort being made by the business people of Athenry as most of the premises are presented to a very high standard. There is a great use of hanging baskets and window boxes throughout and this adds good colour to the town.

The Gairmscoil should be painted. The flower planters at the Church car park are unique and this place generally looks neat and tidy. The library could do with a fresh coat of paint. The window boxes at the Garda Barracks look attractive; nice to see an effort being made here.
There are some lovely traditional shop fronts in the town and everybody should be encouraged to remove all plastic signs and replace them with the more traditional ones. The railway station looks very good. It is very colourful with all of the hanging baskets and flower tubs.

The Castle and the grounds are very well maintained, and is a great amenity for the town. The gate leading into the castle should be painted. Lady’s Well is also presented once again to an excellent standard. It is such a lovely area and I hope it is being utilized.

The Presentation Sports Field is very well presented and looks neat and tidy. As mentioned in last years report the Arch should be cleaned up a little. The open space opposite This ‘N’ That should be tidied up as it looks very unsightly.

The pole advertising Athenry Castle (near the Nursing Home) should be painted. Also the grass verges all along this road should be cut back. The derelict house at the road leading down to Lady’s Well should be painted. Perhaps the committee should undertake to carry out this work.

The area surrounding the Welcome Sign on the Gort approach road is very overgrown and also the area where the sign “Children Crossing” is neglected and overgrown.

There are some well presented housing estates in Athenry. We think organising local competitions is a good incentive and it encourages everybody to get involved and to have pride in their area. Generally the standard of residential areas is good and there are some lovely well matured gardens.

The main observation, judging by the adjudicators comments, is that the litter problem in the town is still a great cause for concern.

While last year the adjudicators said that we had the litter problem under control, this year I am sorry to say that it is back with us again. We the Tidy Towns Committee are not going to solve this problem on our own because we are too thin on the ground. Our Committee at the moment can be counted in single figures.

One thing we all should remember and it is this: Everyone of us, men, women and children, are responsible for the litter that is strewn on our streets. Litter and in particular plastic litter is one of the most unsightly problems that is affecting not only our town but many others in the country.

Our environment is something that we did not inherit from our parents or grandparents, we are only borrowing it for our children. So it is imperative that we leave it to our children in as good if not better state in which we ourselves found it. If we are to be successful in tackling the litter problem, then a whole new community effort will be needed. This is something in which we the committee will be working on in the coming year.

Athenry Tidy Towns Committee held very successful local competitions this year. The aim of these competitions was to raise awareness of the need for civic pride in the town and to officially recognise those who play such an active role in keeping Athenry looking its best.

The competitions were as follows:

Last year was the first year that we ran competitions l, 2, and 3 and the level of participation was very heartening to us.

This year we added a new category namely “Best Kept Suburban Garden”. The reason for this is that the adjudicators last year pointed out to us that residential premises with little or no front gardens were at a disadvantage compared to premises with large gardens. The number of entries for this year’s competitions has doubled compared to last year and this is especially gratifying to us.

Sponsorship for the competitions was obtained from Barney Carroll of Carroll Meats, John Curley of Curley Fruit Importers and the new category this year namely “Best Kept Suburban Garden” was sponsored by two of our committee Philip and Peggy Farrell of Farrell’s Fruit and Veg.

Adjudication took place during the months of June, July and August. The adjudicators were very impressed with the floral displays and overall appearance of the participating premises. They were also loud in their praise of the people who kept their hanging baskets and flower tubs properly watered during the very dry long hot summer.

Awards were presented at a function held in Hanberry’s Hotel last September by our President, Tony Kilcommins.

The prize for the Schools Competition for the second year running went to the Girls National School “Scoil Croí Naofa” and the award for the best individual participant went to Tracey Torpey.

The winners in the “Best kept Private and Residential Premises” category were Mary and Kathleen Gardner. Runners up in this category were Tommy Whelan, Old Church Street and Michael Somers, Clarke Street.

A special award was also presented to the only lady member of our committee – Mrs Peggy Farrell. This was in recognition of her tireless and at times unrewarding work which she carried out on behalf of the committee in overseeing “The Schools Competition”.

The main development works carried out in the town this year were on the “Island” at Prospect and the Iarnróid Éireann embankment. We also carried out early morning cleanups during the August Festival.

On behalf of the Committee, I would like to thank the following people for their help and support during the year: Fr. T. King. P.P., for all his support; Sean Kelly, for the stones; The FÁS Workers; Gabriel Gardner, for the seat; Michael Moran, for the soil; Richard Finn; Kitty Lardner; Theresa Neilan, Principal, An Scoil Croi Naofa; Martin and Lily O’Beirne, for their hospitality; The Competitions entrants; The Agricultural College; Tom Coffey; Eamonn Brody; James McNamara; Eamonn Steward, Area Engineer; Bob Reilly, The Flower Shop ; Michael Cooney and Sons Ltd and Julia Rooney.

We would also like to extend a special thanks to all the people of the Parish for their generous contribution to The Churchgate Collection and Christmas Raffle.

Finally I would like to conclude by saying that if we are to be successful in our overall aim which is to improve the appearance and character of our town and by so doing winning the overall National Tidy Towns Competition, then we the committee will need more active support on the ground.  If anyone is interested in joining our committee then please come along to any of our meetings which are held on a regular basis in Hanberry’s Hotel and which are broadly publicised. 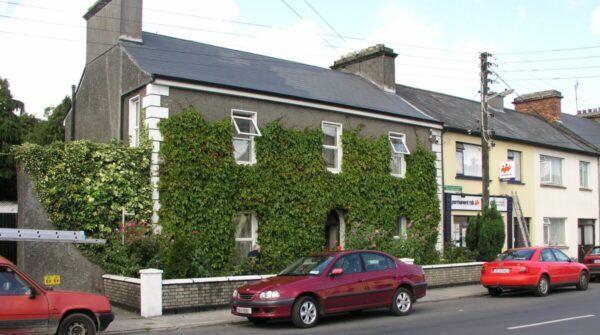 A Winged Horse which stands in the Park in Memory of Padriac Fallon th… by Aideen Rynne
Athenry Journal Archive | Education, Poetry