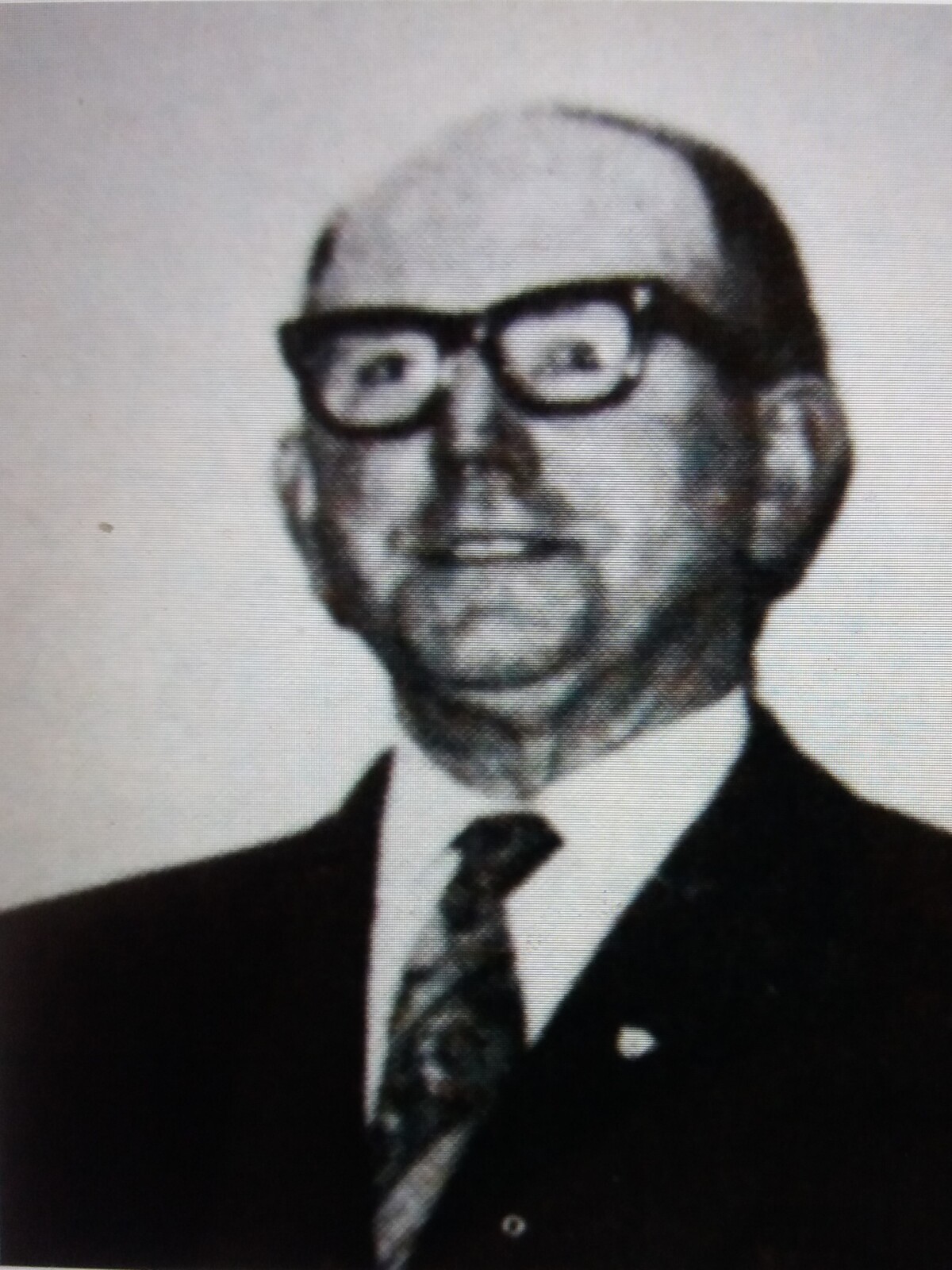 Christopher P. Barrett, known to one and all as Christy, was born in February 1911 and died there in May I986. During his 75 years, in his beloved Athenry he led a full active life and his very active involvement in all aspects of life there conveyed his love of family, community, religion and Ireland.

He was proud to be a traditionalist and consequently his love of traditional values can be seen in his poetry, particularly in the following lines which have no title but are self explanatory.

I seek not power or glory

I seek not wealth or fame

Thankful I am, to be what I am

For I honour and love His name

Power and Glory must surely fade

But that which I seek is for aye.

All I ask, that my lips may fashion His name

At the time decreed that I die.

Some of his work was published in the Tuam Herald, Our Boys and other magazines. One in particular “Ireland 1942” was published in “The Torch” in 1942 after some poor people were killed for grovelling in a dump. He was particularly proud of this poem as it signified his love of justice and he worked hard to maintain this.

In this issue of The Athenry Journal we are very proud to print a small selection of his many poems.

I saw an Irish mother with her children numbered six

A straggling to the dump heap to gather scraps and sticks

Her face was pale and wan, her eyes were sunk and blue

And on each little pinched face was hungers ghastly hue.

This model of our Motherhood, our Christianity.

And fill their baskets with the scraps the “Bigshots” threw away

No wonder that her sons must go to lands beyond the sea.

The favoured few can sit and smile a wallowing in wealth

And crush the soul of Ireland, destroy her soul and health.

Brings back in vision bygone days we Irish hoped were dead.

May in pride, side by side, not slink around in shame.

A love, new-born, has just come into my life

To help bear my joys, the care and strife

Decreed by God that we be man and wife

Decreed by God that friends thro’ life we be

So hence in prayer l raise my voice to thee,

To grant thy mother be our mother too

And shroud us in her mantle blue

With guiding hand to lead us back to you

[This was written as a tribute to his Wife Nan whom he had just met.]

He came, a youth, to fame unknown

To reap the harvest of his God

To walk the path of Life — Alone.

By Corrib’s lovely shore he came

With gentle mein, with noble brow

To loving Souls he preached “The Word”

His hand forever on the plough.

Left grief and sorrow in their lay

The ﬁght was on, each Irish heart

In union stove their deeds to stay.

The words that his Creator spake

Whate’er befalls in joy or dread

In quiet and unassuming way

His noble gallant work he wrought

To us for whom he strove and died

How great the lesson that he taught

Ere long, those ﬁends of lust and hate

Foresaw in him a leader, true

And in the darkness of the night

Set forth their hellish work to do.

And e’er their gruesome work was done

To show unto the whole wide world

The cruel dark secret of the night

From shore to shore, o’er hill and dale

Went forth a plaintive wailing cry

Yet once again, those ﬁends of hell

Dragged forth an Irish priest to die.

By Barna’s calm and rugged shore

They bore thy noble form to rest

Enshrouded in the ﬂag you loved

They raised the cairn on your breast

That those who gaze should ever think

Who gave his all unto his God

Who gave his life for me or you.

Sweet be thy holy sleep and bright

Thy death was just as thou didst yearn

For Ireland’s cause, for Truth and Right.

Tho’ you’re gone your memory lingers

Deep in the heart of every Gael

Forever shall your name be honoured

Amid the heroes of Inisfail.

Fr Michael Griffin, The Crescent, Galway, a native of Gurteen, was arrested by the Black and Tans and dragged to his death after a lorry during the War of Independence!

This poem typiﬁes his love for freedom and justice and the deep Republican tradition which was handed down to him. * Róisin Dubh pronounced “Dú”.

On a night that will always be treasured by me

We shook up the critics like a menace from Mars

And produced Sean O’Casey’s ‘The Plough and the Stars.

Brave Kil. starred as Fluther all out on his own

Though we knew his poor heart was heavy as stone

But that’s what has made it a treasure to hold

For he showed us his mettle was purer than gold.

Then Howley as Peter showed up on the scene

With his ostriches’ plumes and his costume of green

He set the crowd giggling ‘til they laughed and they cheered.

Then Mac as the Covey strolled in spruce and spry

Nettled poor Peter with a gleam in his eye

And started up Fluther with ungodly remarks

As he quoted the teachings of poor Karl Marx.

Then Kathleen as Jennie thought she’d have her say

So she nosed and she battered and gave out the pay

She got the crowd going by her wit and her grace

And she holds in our hearts a very good place.

Then Kitty as Nora came hurriedly in

And soon put a stop to the rush and the din

Tho’ it doesn’t sound well for her husband to say

She stole her due honour as ‘Queen of the Play’.

Then Nodhlag as Bessie co-starred with old K.

She bowed knee to no one, and just had her say

But she has won a place we know she’ll retain

And the crowd will acclaim her again and again.

Then Christy as Clitheroe in pomp did arrive

And changed the whole scene as he kissed his fond wife

With his own red-lipped Nora to help him along

He sang to the crowd that sweet little song.

Then Tom as the captain in smart uniform

Passed a little remark that raised quite a storm

But Tom didn’t mind, he just whistled quite gay

‘Til Christy was ready, then, they both went away.

Then Ethna as Mollser came timidly on

For with all her paint she looked weak and wan

So we listened in glee to her ready-made coughs

And carried her proudly away in a box.

Then Detta as Rosie was cream of the show

Tho’ Michael proclaimed her ‘a wee bit too slow’

I claim a stardom in doing her part

As she nettled the Covey and won Fluthers heart.

The bartender Jack in his job did excel

As he ordered them all to clear off to hell

Tho’ we all paid our drinks, we never got change

But that was a scheme only Jack could arrange.

Then Jimmy as Langan, just starred in his part

And gasped as the life blood flowed out of his heart

Then showed up again in the Brave Sergeant’s role

But after the show he was put on the dole.

Then a voice chanted in just like a recordin’

As he quoted his lines with passion a’mingling

We listened in pride as we felt our blood tingling.

And good old Mike Fahy both on stage and off

Was an excellent Cockney, a real English toff

The make-up was perfect, we all did agree

That for once we looked handsome, Oh Yeah! sez me.

Then on came “The Lady”, that’s Molly we know

She looked, oh, so frightened with no where to go

The boys couldn’t help her, so, off she goes.

The “Big Shot” producer just can’t be left out

Tho’ down at rehearsal we dreaded his shout

But after the show so proud and elated

He was glad with us all to be associated.

And Peggy and Rhoda as prompters did well

Though I think on the lines their minds did not dwell

Their thoughts were a wandering down to the hall

Just thinking of someone quite handsome and small

The technical staff did their bit as we know

And helped to make perfect a really good show

So we all can be happy, for doing our best,

In “The Plough and the Stars” in that town in the West.

This epic is a tribute to the ‘Athenry Players’ whose 1943 production of the “Plough and the Stars” was much acclaimed. Many of that cast have passed to their eternal reward but the Dramatic Society still lives on in the capable hands of Kitty Lardner who was active even then. C. P Barrett

I heard a thrush at eve, as shadows fall

I listened entranced to those exultant notes

And thought of God who is boundless goodness.

Even on humble birds we bestowed so rich a gift

Whilst I a blest audience feasted.

My joyous heart goes forth in prayer above,

I know not why, I meekly said

(In this poem we see his love of nature and peace and observe that he took the time to “stand and stare” and see God’s handiwork in the peaceful countryside!) 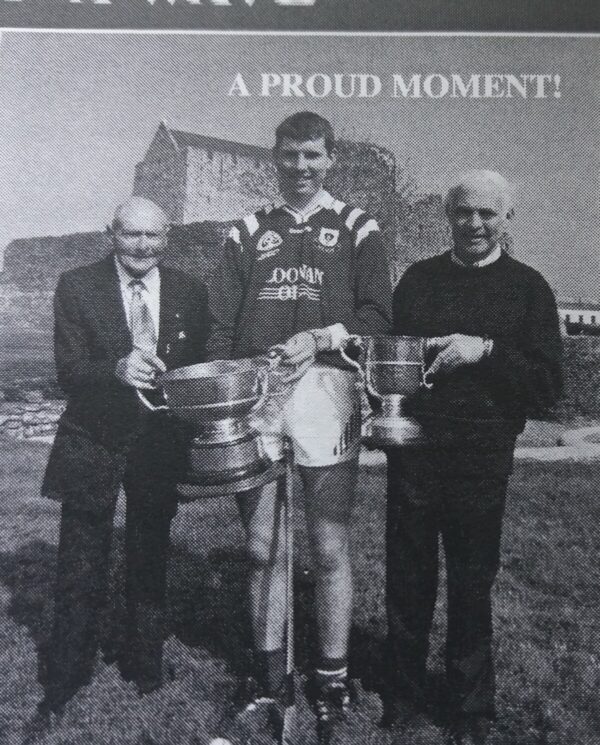 Farming is one aspect of life that has seen drastic changes in the las… by Paul McNamara
Athenry Journal Archive | Education, Farming, People