In this the Centenary year of the establishment Carnaun National School, it is only fitting that some of the changes that have taken place in the immediate environs within its catchment area should be recorded for posterity.

One of the villages closely associated with Carnaun School is the nearby village of Cussane which is situated approximately four miles north of the medieval town of Athenry. In this article I will dwell on the various changes that have taken place in the village notably the names of the various households, their livelihood, entertainment and pastimes.

First of all let me start at Cussane Crossroads, a focal point no doubt in the past. North of the Crossroads the Madden family still occupy the family homestead. To the East of the Crossroads the farm now occupied by the Kelly family was, in the early 1900s, owned by a Margaret Bane who sold it and moved to Galway to live. Next you have the Jordan farm which later became Treacy’s through marriage. Jordan’s had a Public House at the Crossroads and the window of Jordan’s house can still be seen there. Next you have the Mullins homestead whose ancestors resided in Cussane for generations. Next you have four families living in close proximity to each other in a communal typesetting – each had just a few acres of land. The families involved were two Gardiner families, one of which were carpenters, an Allen family and a Cullinane family. Later on when both of the Gardiner families and the Allen family moved from the area, the Cullinanes stayed and were given the various pieces of land owned by the others. John Cullinane passed this land on to his relatives and it is now owned by the Gilhooley family.

Until very recently the ruins of these houses built on a small plot close together in rectangular fashion could be seen. Next you have the Long homestead. This farm was originally owned by the Higgins family whose ancestors resided in Cussane for generations. Patrick Higgins passed this farm on to his close relative Michael Long.

This was a rural community and as such engaged in the usual rural activities. Lack of transport restricted their travel and this in a sense dictated how they spent their leisure time. Consequently, they looked to their own community to provide them with outlets for enjoyment. One of these was the local Cussane hurling team which drew its players from the surrounding catchment area. During the 1930s the team trained in Martin Doherty’s field at Cahertymore Crossroads and later moved to Waltie Walsh’s field in Carnaun. During those days there were three teams in the parish, namely, Athenry, Newcastle and Cussane. All three played in the North Board and were continually in rivalry with each other until the late sixties when the three were amalgamated into one parish team known as St. Mary’s, Athenry. During those years Cussane produced some excellent players and won the North Board Intermediate Final in 1959, 1963 and 1966. 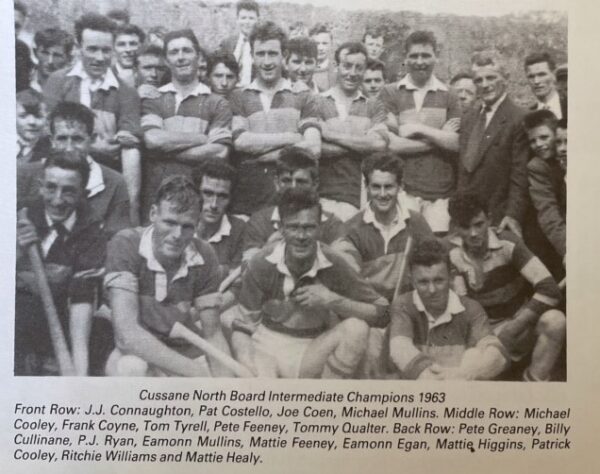 Dancing was the main source of entertainment on Sunday nights. During the winter months the dances were held in the local dancehall and during the summer they were held in the open at Cussane Crossroads. Music was provided by an accordion player. This tradition held until the forties when with the advent of the motor car, the Hanger and Seapoint Ballroom became the venues.

Another trend started shortly after this, namely Marquee dances. These were held in different parishes and the organisers tried to get the Big Bands in order to attract the crowds. The Cussane Hurling Club held their first Marquee Dance in Doherty’s field. However, with the advent of the Disco, Ballroom Dancing became defunct and now the Disco is all the rage.

Bonfire night provided the entertainment on the 23rd of June each year. Tyres and wood were gathered locally and the huge fire usually burned on into the early hours of the morning. This night was again celebrated with a dance near the fire and music was provided by an accordion player. This event usually attracted a large crowd and was held at Cussane Crossroads. This tradition still exists to the present day with a fire only in the neighbouring village of Carnaun.

As these changes were taking place within the shadow of Carnaun School it too was changing and progressing as a centre of learning. It had become a three teacher school with Timothy O’Regan as Principal. Under this Principalship it represented a view of learning that was unified and comprehensive, and the Christian ethos was always to the fore. It aimed at valuing each child equally, at inculcating respect for our deep-rooted heritage of learning while at the same time it aspired, and still does to equipping its pupils with the knowledge and skills necessary to face the challenges presented to them. For many past pupils educated within its walls it will always be their old “Alma Mater”.

Page 075 of The Carnaun Centenary Book