Skip to content
Edward Carson: The Architect of the North

Edward Carson – The Architect of the North

Leonard Merriﬁeld’s commanding bronze statute of Edward Carson was unveiled by the ﬁrst Northern Ireland Prime Minister Lord Craigavon at Stormont on July 8, 1933. a grey, wet day. But, such was the nature of the occasion, more than 40,000 people had gathered that afternoon on the windy plateau in front of the new parliament buildings outside Belfast.

The most unusual aspect of the proceedings though was that the subject of the statue was also present in person: Baron Carson of Duncairn, there on the threshold of his 80th birthday. The fact that he was emotionally affected by the occasion cloaked the supreme irony of the site chosen for his efﬁgy.

Carson irrefutably was the architect of Northern Ireland. To his resolution and qualities of leadership it owes its existence. As such, he can lay just claim to a place in the Pantheon of the most notable Irish personalities of the Millennium. But Carson had never wanted either the separate northern territory nor the separate parliament at Stormont. For him the very presence of both represented defeat, a humiliation to which he responded by declining an offer to be its ﬁrst prime minister, and subsequently resigning the leadership of the Ulster Unionists in 1921 and seeking refuge in the Lords as a lord of appeal.

Carson was born in 1854 at 4 Harcourt Street, Dublin, the son of an architect, himself the son of a Scotsman who settled as a merchant in Dublin in 1815. His mother, Isabella Lambert, came from Galway and could trace her lineage back to John Lambert, an ofﬁcer in Cromwell’s army.

The young Carson went to Portarlington school in Co Laois and then to Trinity in Dublin where he was a contemporary of both Bram Stoker and Oscar Wilde, whose libel suit against the Marquess of Queensbury was to give Carson his ﬁrst big success as an advocate at the bar. Carson was later to become one of its shining stars. Early on he displayed a formidable talent in cross-examination, a capacity for sheer hard work and an underlying idealism that was never discussed, but showed in his attitude to advancement. He served the chief secretary, Arthur Balfour, in the exposed ofﬁce of crown prosecutor in the 1880s. It was an unpopular role, involving Carson in direct enforcement of the harsh eviction laws. He escaped an assassination attempt. But he was rewarded by Balfour in 1892 with the appointment of solicitor-general for Ireland. The necessary parliamentary seat was found when he won an election for Trinity College.

This was Carson’s first serious experience of the London scene. He excelled in his opportunity. The Wilde case, in which he was able to expose the homosexuality of the plaintiff, brought him social celebrity. So, did the high-proﬁle Arc Shee case of 1909 – where his role for the defence was later to be immortalised on the stage by Terence Rattigan in The Winslow Boy.

Carson was now commanding an income of £20,000 a year in days when a visit to the butcher and grocer could be accomplished for less than four shillings and bricklayers were paid little more than a pound a week.

By 1900 he was solicitor-general for England, was knighted and shortly afterwards in 1905 admitted to the privy council. He was just 51.

It was a glittering record – but the parting of the ways was at hand. At this moment the Ulster Unionists were forming the Ulster Unionist Council to focus opposition to the mounting Irish agitation for home rule. They sought a leader.

It is doubtful whether anyone will ever be able to answer authoritatively why Carson accepted this new role. ATQ Stewart of Queens University, an authority on Unionist politics of the period, speculates that Carson deliberately risked his entire career and reputation by assuming leadership of the opposition to home rule to achieve a separate purpose. Stewart believes Carson might well have had ambitions to lead the Conservative Party and ultimately to get to No. 10.

Carson accordingly presented himself at James Craig’s palatial home on the edge of east Belfast one day in 1911 where he was officially adopted as leader in the presence of an assembly of 100,000 loyalists.

There is no doubt that his most controversial act was to licence the raising and arming of the Ulster Volunteer Force with 25,000 German riﬂes and 3m rounds of ammunition shipped into the small Co Antrim port of Larne under cover of darkness and spirited away and hidden before dawn. By the end of 1913 the UVF had almost 100,000 part-time volunteers with elaborate mobilisation plans, motorised sections and even a medical branch.

Carson was photographed reviewing his troops in various parts of Ulster, the familiar homburg at a rakish tilt over one eye and a blackthorn stick under his arm. But Carson was depressed, both by the violence in Ireland and the looming separatism in Ulster. He knew the Unionists regarded the eventual winning of their right to opt out of Irish home rule as a victory; but in his heart he did not.

He regarded the creation of Stormont as in essence another brand of home rule, which of course it was.

Devolution was used from the start as a means of keeping the unruly province at arm’s length from Great Britain in the thinly disguised hope that its life would be short and followed by a merger with the new parliament in Dublin.

To the extent that everything in this line of reasoning was contrary to Carson’s aspirations, the settlement of 1920 and the creation of what was to become Stormont represented signal defeat. In a real sense his Unionism bore what, at the close of the 20th century, is called an integrationist stamp.

Above all, he deplored the division of Ireland and endured episodes of acrimony with many of his old political colleagues at Westminster – Churchill, Birkenhead, Chamberlain, Bonar Law – because he knew in his heart, as latter-day Unionists have been obliged to accept, that integrationism is a lost cause.

He made his peace with most of them before he died. But he rarely set foot in Ulster afterwards, which was probably why he found the unveiling of his effigy that July day at Stormont so moving. He knew he was unlikely to set eyes on it again. Nor did he. He returned to Cleve Court, the old house with considerable land near Margate in Kent, which he had bought in 1921. He had been shattered by the Anglo-Irish treaty of the same year. He felt his political labours to save the whole of Ireland for the Union had been in vain.

His bitter maiden speech in the House of Lords at the end of 1921 heaped vituperation on the government. The treaty, he said, had been approved with a revolver at ministers’ heads. He accused his Conservative party colleagues of reducing him to a puppet in the political game. They had sold their friends to conciliate their enemies.

He died at Cleve Court at the age of 81, little more than two years after he had witnessed the unveiling of his statue at Stormont. By his own wish he was buried in Belfast, where Craigavon gave his old colleague a state funeral.

Eric Waugh is a journalist with The Belfast Telegraph

Page 087 of The Lamberts of Athenry Book 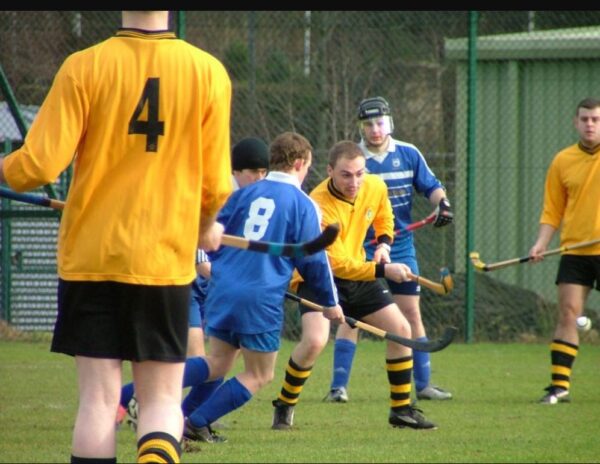 From Inverness to Athenry August 1995

A group of young shinty players will be visiting Athenry from the 1st… by Tom Cloonan
Athenry Journal Archive | Education, Sport