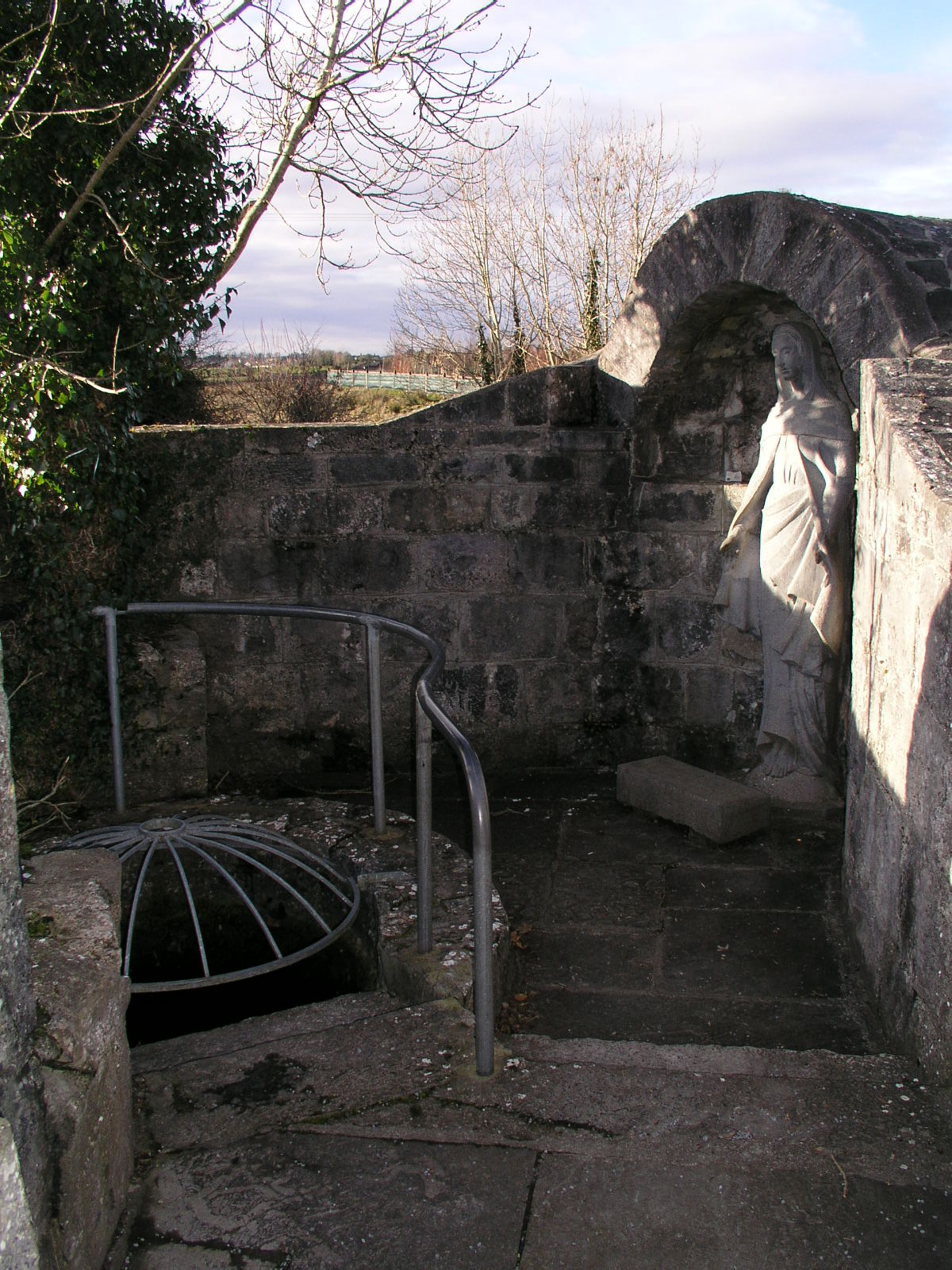 Holy Wells have been a feature of the Religion of the Irish people for longer than records have existed and, while pilgrimages to them are not as common as it was last century, many wells are still visited, particularly on the Saints’ and Pattern Days.

St. Dominics Well, out in Esker, is very well known.  Here on the 6th. of January every year, the water is Blessed, farmers and their families come for the blessing and take away bottles of the water, which is said to cure illness in animals.

Another well not far from Athenry is St. Kerrill’s Well, near Gurteen; the custom there is to take water home and keep it safe, as a protection against thunder and lightning.

On the 20th of August each year in Abbeyknockmoy, the water is blessed in St. Bernard’s Well during an open air Mass.  This water is believed to cure all sorts of foot complaints.

The water in the Athenry Well is blessed every 14th. of August and while there are no cures attributed to it, people certainly believe there is a cure in the headache stone – a square stone with a hallow centre, situated beside the well.

There are holy wells all over Ireland; some on top of mountains, others on islands.  All with a history attached to them.

Looking forward to the end of this century it seems likely that the popularity of some of these pilgrimages will diminish, but at present they are something which people need and enjoy.

Apart from the Prayers and the ritual, the pattern is treated as a rural holiday and enjoyed as such.  In 1975 Msgr.  Michael Higgins from Castle Lambert, now administering in San Diego, had the idea of getting all the native nuns and priests home for a reunion, and on the 16th August 1981 his dream was realised.  They came from all parts of world and had a wonderful time.

Another reunion is planned for 1996. In the meantime, as many as possible come home for Lady’s Day to concelebrate Mass at the Well.

The Pilgrimage to Lady’s Well of 15th. August is really the highlight of the Festival of Athenry.  It is holiday time, the emigrants are home, all looking forward to having a great time an enjoying the festival.  Mary Murphy Kingsland, recalls as far back as 1935 when her father and brothers would ‘white-wash’ the walls of the well and surroundings, in preparation for Lady’ Day.  They would cut the grass with scythe and sometimes, if the well was dry , they would draw water up from town in barrels by pony and cart and bucket it into the well.  Later it would be blessed, usually on Lady’s Eve when pilgrims would come, from Connemara mostly, for the all night vigil.  Refreshments were available from a tent erected in the grounds, by people named Callanan from Loughrea, who came every year and supplied teas, etc. to the people who were there praying all night.

Pride of place in Mary’s kitchen is the first statue ever placed at Lady’s Well.  It was not a fixture there – her father carried it on his shoulders every year for the vigil on Lady’s Eve and for Lady’s Day, and then carried it home again when the last of the pilgrims left.  However, a permanent statue was eventually placed there and, in approximately 1932, the late Canon Conroy presented the original statue to the Murphy family and there it has remained since.

Mary also tells us that the late Canon Gibbons said the first Mass at the Well in 1972, and the custom of open air Mass there has continued ever since.  Long may it continue.

My grateful thanks to Mary Murphy for a very interesting and informative evening.  Go raibh míle maith agat Mary!

It was the “dream” of Canon Canton, Parish Priest of Athenry to have a… by Anonymous
Athenry Journal Archive | Education, Religion