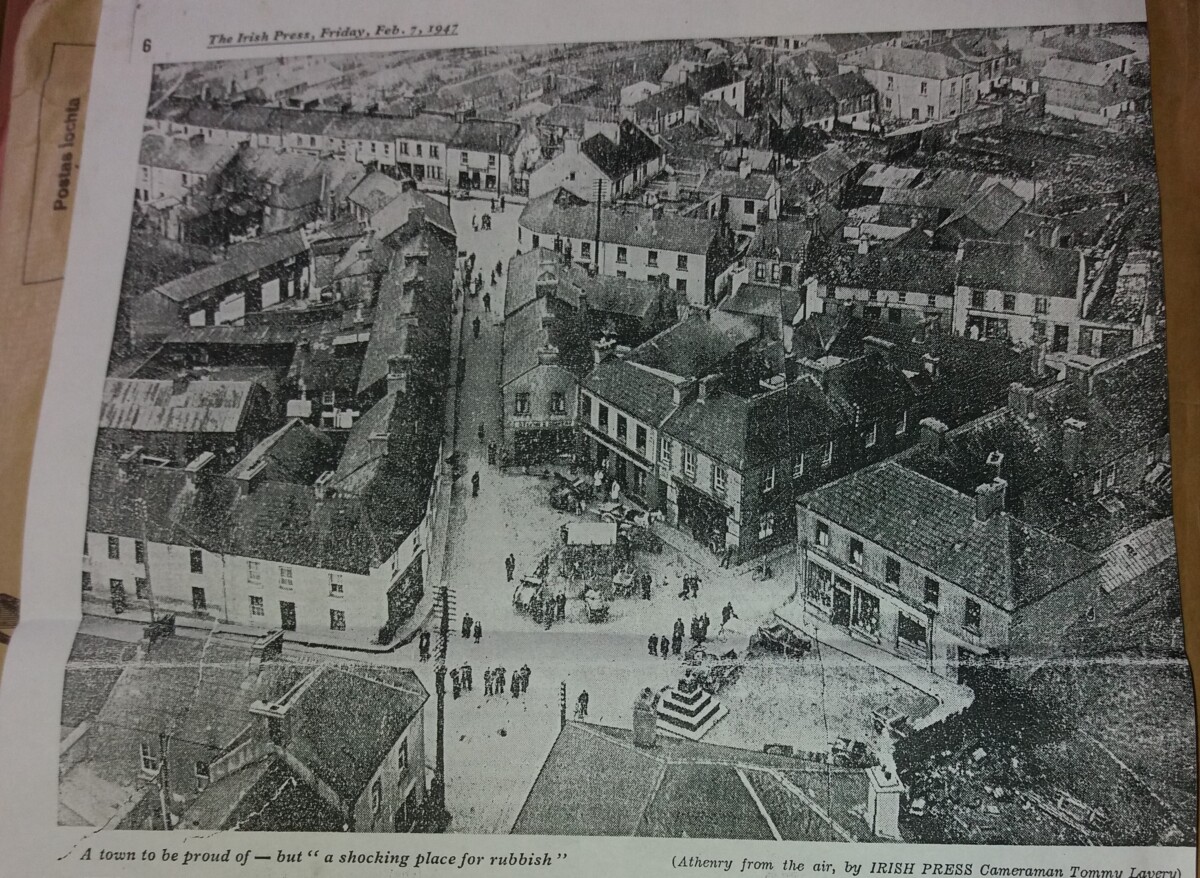 The first industry that comes to mind was the Western Sack and Bag Company.  That factory was situated in Caheroyn, where McNamara’s garage is now a thriving concern. The firm employed about a dozen people, and they manufactured all types of jute sacks.  Jute was the material that all sacks used for grain, coal and potatoes, were made of. One of my memories, as a young person, was the arrival in town of Mr George Hayes, the then managing director, He was a big Corkman in his bowler hat and his big car.  His secretary was Roseline Fitzpatrick, and the foreman was Paddy Kilkelly.  Amongst the staff were; Annie GUI, Detta Burke and the Hanley sisters.  Eventually, plastic ended that enterprise in Athenry.

Subsequently, the factory was used as an oratory for Sunday Mass, while our new church was being built.  Then Athenry and its surrounds were fortunate to have Corbett’s General Store in the locality.  The expression of ‘a needle to an anchor’ was synonymous with Corbetts. The grocery and egg department employed about three staff and the hardware about the same, while office staff numbered about six people.  But the biggest employment was in the yard, where the potatoes and barley seed business was a big concern for the farming conununity.  Contracts for malting barley and seed potatoes were taken out by farmers and the firm supplied both manure and advice on crop management. Martin Feeney was the liaison between Corbetts and the farmers.  Mr John Tully was the local inspector for the seed potato industry.  In the harvest season, at least a dozen men were employed in the collection and grading of the potato harvest.  Tommy Reilly supervised that end of the business.

Thousands of tons of seed potatoes were exported, and Corbetts were nationally known for the quality of their ware. Malting barley was another big venture for the firm. The Saddlery was managed by Mick Hussey, and the yard was controlled by Willie Corbett from Newcastle. Amongst the staff were lorry drivers Frank Kilkelly and Jimmy Burke. Malachy Joyce, Jimmy McCormack senior, Mixie Connolly and Padraic Connors were some names that come to mind as members of staff.  The building industry was also well provided for in Corbetts.  All timbers, windows and doors were hand-made on the premises. Jimmy Ryan and Jackic Monaghan were skilled tradesmen. The history of Corbetts would never be complete without reference to Mr John Corbett.  He managed every facet of that giant business.  He was quantity surveyor, salesman and business man all in one, usually from eight o’clock in the morning to late at night.  He arrived at the business in early morning and was last to leave.  His mode of transport was his trusty Raleigh bike.

Finally, we come to another family business namely Taylor’s Mills.  That business was located at Bridge Street on the banks of the Claren River.  One of the features of that period was the mill wheel driven by water power which stood on the dam side of the river.  The huge brick chimney stack stood high on the Athenry skyline, but all that became obsolete with the advent of electricity.  The firm employed many locals in its enterprises. Stephan Burke Senior and Charlie Collins were expert sawyers, and the saw-mills were used by customers from a wide area.  Many new houses of that period had rafters and other timbers sawn at Taylor’s Mills.  I clearly remember the now Castle Park and the Castle surrounds, completely covered by timber logs, seasoning for later use, The woods of Clyda, Headford, were cleared by Charlie Taylor and his timber fellers Joe Howley and Paddy Cahill, who were tops at that skilled trade.  The making of egg boxes and turkey crates were an added dimension to the timber industry here.

The milling industry was managed by Herbert Taylor.  Farmers queued to have their grain milled and their oats and barley rolled for stock feeding purposes.  The wheat was milled to flour for home baking, and oatmeal provided many homes with basic staple food.  Mattic Ryan and Paddy Greally were the main men in that area. Alas, those three firms are now part of the past and so I hope this little exercise will refresh old memories. 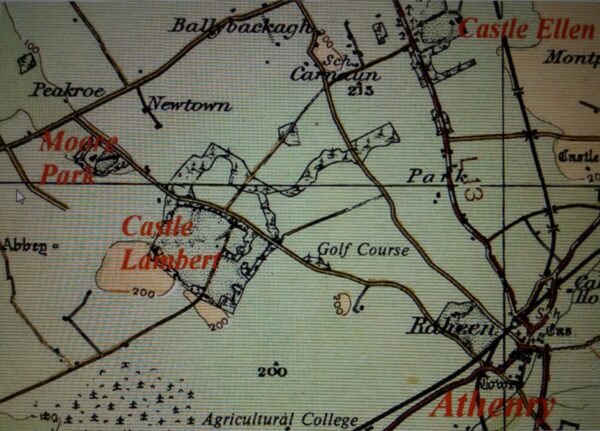 The Lamberts of Castle Lambert