Skip to content
Jottings of my Life in Tyrone, Ireland – Appendix 2

Lady Harriet (1782-1830) is indicated as Christopher St. George’s mother in the Irish Georgian Society Journal, Vol. XIX, Nos. 3 & 4, July>December 1976, page 68 (St. George Pedigree). She was, therefore, my Aunt Elizabeth’s great-grandmother. Her maiden name was Lady Harriet St. Lawrence, and she was the eldest daughter of William, 2nd Earl of Howth.

Lady Matilda Bermingham would have been a great-great-great aunt according to Gordon St. George Mark, the author of the article in the above journal. She was a sister of Lady Mary Bermingham who lived in an earlier era. However, there were other Matildas in the family, and it is quite possible that my aunt had one of them confused with Lady Matilda.

Also, the above journal lists Christopher St. George’s children as twelve: two sons and ten daughters. It is quite possible that five children may have died in infancy or early in life making the total of seventeen that my aunt indicated.

The surname, La Hiff, is usually spelled Lahiff, or Lahiffe. Some spell it one way and some another, but it is all the same name. I doubt whether anyone knows its true origin.

Henry Lahiff (emigrated to California about 1888)

Christopher St. George (1810-1877) was a member of the English Parliament from 1847 to 1852. According to the above journal, he was a descendant of Lord St. George, Vice-Admiral of Connaught, who died in 1735. Pages 54-57 of the journal describe Christopher St. George’s funeral as one of the largest ever seen in County Galway.

Tyrone House was located on a promontory on Galway Bay, about two miles from the town of Kilcolgan. To the west was a view of the Aran Islands, and to the north the Connemara Mountains. The interior was completely destroyed by fire in the early 1920’s. Only the thick limestone walls remain standing today. It is now owned by the Irish Georgian Society, who hope that it may someday be restored.

The life-size marble statue was probably of a more remote ancestor: either the first Lord St. George (1751-1735) or Usher,

Lord St. George who died in 1775. Unfortunately, the statue was destroyed when the house was burned down.

My father, Henry Lahiff (1868-1954), came to the United States in 1888. At first, he was employed by a mining company in Bisbee, Arizona, and later went to California. After working for various mining and bridge companies, he later became self-employed as a mining and civil engineer in the Mother Lode area, mostly in El Dorado County. When he visited his home in Ireland in 1904-05 he took many photographs of Tyrone House and the surrounding area, Some have appeared in the Irish Georgian Society Journal mentioned above.

The grandmother, Honoria Kane St. George, passed away in 1905 at the age of 96. She was the widow of Christopher St. George.

My father, Henry Lahiff, saw her for the last time in 1905 and received news of her death shortly after he returned to California.

The sword and mace are now housed in the Bank of Ireland, which faces Eyre Square, Galway City, and can be seen there during normal banking hours. These two pieces, after having been sold by Anne Blake in 1930, were acquired by William Randolph Hearst in 1935, returned by the Hearst Foundation to the people of Ireland in 1960 and restored to Galway in 1961. (See Galway Guidebook, “Tourist Trail of Old Galway”, published by the Ireland-West Tourism, revised 1978, pages 9-l0)

Round towers in Ireland were built in about the 9th Century to serve as watch towers, belfries, storehouses, and as places of refuge during invasions. (See Illustrated IRELAND GUIDE, published by the Irish Tourist Board.) Perhaps this information was not publicized at the time my aunt wrote these memoires.

Jottings of my Life in Tyrone, Ireland – Corkscrew Hill Legend 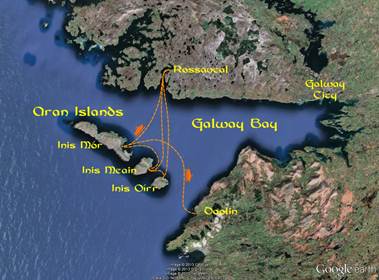 Jottings of my Life in Tyrone, Ireland – Galway and Its Environs