Skip to content
Jottings of my Life in Tyrone, Ireland – Family Portraits

I wonder how many of us have enjoyed sitting around a blazing log fire watching the blue and violet sparks as they shoot out from the burning embers, making fantastic shapes as they dart across the hearth? I delighted in sitting on the rug in front of the fire with my sister enjoying our toast and hot cakes, and watching the dancing reflections of the fire on the old paintings, and imagining that our ancestors were keeping us company. Sometimes I would look at some of the paintings of old stately people who were around the room and wonder if they could only come to life and walk out of the frames and join us. I would feel sure they could tell us of some hilarious times in their lives.

One large picture that hung over the mantelpiece was of my great grandfather, taken in the robes of state he wore when sitting in the House of Lords. Judging from his broad face and portly figure he certainly had the appearance of an epicure. Another picture represented a member of the Bingham family arrayed in a blue coat, the ruffles of which partly tried to cover up his more than double chin. To me he simply looked like a hardened old sinner. Over on the sideboard was a painting of the beautiful Lady Harriet St. George, taken in a cream Grecian costume, and looking so calm and lovely as if nothing in this life could induce her to say or do anything wrong; but alas I was told she died from her awful temper.

Even the maid in Lady Harriet’s employ suffered and felt the brunt of her fury when her mistress would beat her over the head with the hair brush. I wonder if she ever tried the mirror as a means of correction? Or perhaps she was afraid she would break it and that, of course, would mean seven years of bad luck. However, that may be, she was buried in a vault adorned with a magnificent arched of cut stone. It was on my grandfather’s estate at Drumacoo, and could be. seen through an opening in the woods from the upstairs windows of our home. It made quite -a picture.

Then there was the picture of Lady Matilda Bermingham, which I never admired; she wore her hair pompadour, which gave her face a small narrow appearance. She had a bitter look, as if nothing agreed with her but I suppose she must have had a hidden charm somewhere for her husband erected a beautiful vault to her memory in Kilconnell Abbey. Perhaps he thought more of her when she so graciously passed on.

I also admired the picture of the Honourable Dick Nugent; he looked as if he were trying to be pleasant but that something held him back. Some time ago I visited the Huntington Galleries and, to my surprise saw a painting of Dick Nugent there. My relations always mentioned that one of the paintings was missing years ago but that it never could be traced. The Nugents were relations of my mother. 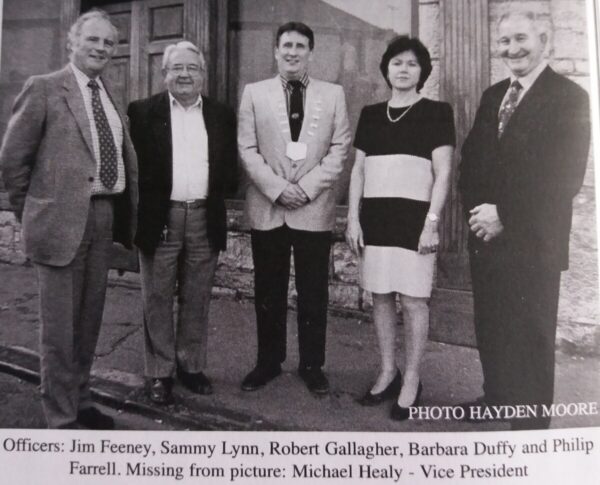 Athenry Chamber of Commerce and Industry – May 1997