Skip to content
Jottings of my Life in Tyrone, Ireland – Uncle Edmund

My grandparents, having nine married daughters, used to invite each couple and children, if any, for a two-week visit during the year and, of course, also at Christmas. The house was so large that they each had a room of their own which they always used when they came for a holiday to Tyrone; and you may be sure the place was filled at this festive season of the year.

You see, we were so many sisters and brothers,

We made quite a party without any others.

We sent invitations to all of our cousins,

And of course, they all came —

You could count them by dozens.

All our elders were there, both uncles and aunts,

And none of them came with bees in their pants.

But dear Uncle Edmund, in a watery plight,

Would use the commode three or four times a night.

Thereon hangs a tale! Now, it so happened that the room occupied by my aunt and Uncle Edmund Blake, was right over the drawing room and every time they came, this fussy old fellow would complain about the music and dancing that was going on in the room below. He thought everyone should be in bed by ten like he was, and, of course, he could not sleep a wink – at least, so he said.

My Aunt Matilda, who always dreaded their visits, got so sick and tired of his complaints that she decided that something would have be done about it. Although there was a bathroom on each floor, every bedroom was provided with a night commode placed beside the bed. Well, one night, it was about 12 o’clock Uncle Edmund had to get up, to relieve the cravings of nature. He used the article all right when suddenly it overflowed with a froth of bubbles. My aunt and uncle were scared out of their lives. They rang the bedroom bell and Aunt Tilly was called out of bed.

As you can imagine, there was great excitement and everybody was up and surprised to hear that uncle was very ill and that something had happened to him. Aunt Tilly had his legs washed in toilet water, and then promptly sent for the doctor. He was quite a long time in coming as he lived a long way from us, but when he did show up, he could not say what was the matter. Then another medico was called in and he too, was nonplussed. The next morning a specialist was sent for from Dublin, and when he came, Aunt Matilda let him in on a little secret. She had put a Sedlitz powder in Uncle’s bedroom article! Of course, that raised a great laugh and Uncle was given a soothing draft and bundled off home. He never came again at Christmas time and never knew what had happened to him.

In a way, we were sorry for him, he was such a kind-hearted old gentleman and we all loved him, but he was’ a little old” for us youngsters and could not see that a little dancing now and then is relished by the best of men.

Uncle Edmund resided at Belmont just a mile or two from Renmore. He was the last of the mayors of Galway and died at the ripe old age of ninety-two, leaving his wife and her only daughter, Annie. When the corporation of Galway was dissolved in 1841, Mr Blake was presented with the city’s sword and mace in lieu of his salary which had not been paid for ten years and at the time of time dissolution amounted to 8 O00 pounds. When Mrs. Blake, my aunt, died a few years later these ancient treasures were left to her daughter my cousin Annie Blake, who a short time ago solo them to a gentleman in Dublin. The mace was made in Dublin in 1712 by John Clifden, a celebrated Irish silversmith. It was beautifully chased and weighed nearly 300 ounces of solid silver. The sword, however, was made in Galway by Edward Fallon, a local silversmith, in 1660 when John Morgan was mayor. It is also of solid silver with a blade of finely tempered steel.

When Queen Victoria visited Ireland, Uncle Edmund acted as one of her aide-de-camps and explained many questions asked by Her Majesty. Several Irish papers published rhymes of her trip, one of which I remember as follows: ‘

The queen she came to Ireland

and she had not travelled far,

“I like the jolts of your Irish jaunting car.” 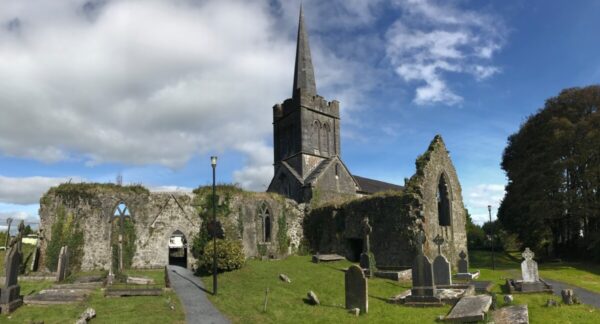