Skip to content
Knockbrack: A Great Place to Live

• Rabbitts in Tysaxon always noted as a great house for music had one of the first corn threshers in the area.

• Pat Connor was a farmer and a carpenter.  Martin Ryan, a plumber, came from Tipperary.

• Pete Feeney was a farmer.

• The Bernard Feeneys – all dead now and the land sold.  May they rest in peace.

• Padraig Byrne married to Mary Gill a past pupil of Carnaun School.

• Edward Monaghan, farmer, married to Queenie Kelly of Cussane Cross.  His brother Christy, R.I.P., was killed by lightening in 1957.  Their family went to Carnaun School.

• John Gardiner, carpenter, maker of traps, cars, caravans, chairs, tables, coffins and various other articles of timber and used a horse drawn hearse made by his father.  This property was sold some time ago to the O’Connor’s (of golf fame) and sold later to Johnny Lally and again to Millar.

• Michael Gardiner, brother of John, general woodworker, his family now in business in the Square of Athenry.  Some of them went to Carnaun.

• Tom Qualter, farmer and builder, now farming where Allens lived.  Married to Carmel Lohan from Roscommon. His children are going to Caranun school at present.

• The Fahy family from Knockbaun-all gone and the land is now divided.

• The Ryans went to Carnaun and some still do .

• Mahons – all gone now.  May they rest in peace.  Pat and John played hurling with Derrydonnell.

• Des Ryan, tradesman, and past pupil married to Arm Honan from Clare.  His son Paul is at present in Carnaun.

• Eamonn Killecn, farmer, had the distinction of being the first to own a tractor in the village.

• Mrs. Molloy, widow of Pat Molloy, farms at Belleville Cross. Her son Fr. Michael Molloy is secretary to the bishop.

As you can see from the above list, this area was always noted for its tradesmen-especially carpenters.

It was also great tillage country – industrious farmers sowing beet, barley, oats, potatoes, turnips and mangolds.  During the beet campaign the Alley Bridge was a busy place as the beet was loaded onto railway wagons there.  From there it went by train to the Sugar Beet Factory in Tuam.  Loading beet at the Alley was not the easiest of tasks as the road and tracks were on the same level.  Those lucky enough to be near the station in Athenry had it easier as the loading bank was level with the top of the wagons.  The line of horses and carts was a sight to see.  Some drivers came with a few horses and carts, driving the first horse, the others following along in a line behind.  Some others had four wheel wagons.

Loughan Well is noted for the best supply of water in the area.  Before the coming of the piped water scheme it was a very busy place with horse carts, pony carts and donkey carts all gathered there.  It was a great meeting place.  The filling of the barrels sometimes started at six o’clock in the morning as people needed water for their houses and cattle.  The well would go down during the day but always came up trumps again.

Dermot Gill and Eddie Monaghan started the Knockbrack Group Water Scheme in 1975.  The Abbeyknockmoy Water Scheme now passes the area on both sides of the village at Belville and at Tysaxon.

Living not far from the bog at Newcastle we were familiar with the drawing of turf.  Some days the road was very busy with horse carts of turf.  The Carnmore men were noted for their big loads.  While the locals built the loads high over the creels of the cart these men often only used the standards and built the load high and long, out over the horses back and kept it in position with a “brath” and a rope.  They needed to bring a much bigger load as the draw was farther.  The Oranmore men did not come empty.  They brought sea-weed as fertilizer to the people of Athenry and went home with a load of turf.  Industrious men!  Nowadays the turf still passes but not drawn by the horse.  It comes in lorries, tractors, and car trailers.  The “slean” is now seldom used to cut the bank, instead it is done mechanically.  All the farmers in our area have a plot in the bog-a valuable commodity.

Knockbrack Wood was planted in 1948.  When the trees were cut down it was re-planted in 1982.  Persons unknown tried to have a crop of cannibas there in 1989 but their plans were spoilt by vigilant gardai thank God. Knockbrack was surrounded by three big houses-the homes of the landlords who owned the land in the area before it was given to the tenants.  The Halls lived in Knockbrack, the Blackhalls in Belville and the Lamberts in Castle Ellen.  Mattie Feeney now lives at Knockbrack house.

Belleville had a famous tug of war team in the 1930s.  They had Jack Mahon in the eye of the rope.  He was only 11st. 7 Ibs. and held his place against men of 14st.-17st. This team won the Connaught Final. The full team was: Jack Mahon, Tommie Allen, Michael Sean Gill, Martin Joe Coleman, Pat Molloy, Benny Coleman, Johnny Gill, Tommie Madden, Johnny Burke, Tom Coady.

The Knockbrack farmers “stood” their stock on the street and foot-path by the Arch in Athenry on Fair Days.  Weanlings were shown at the Square and milch cows were sold on Cross Street outside Cannon’s Hotel.

Living in Knockbrack with carpenters and tradesmen all around us-especially the Gardiner family-we were familiar with the making of horse-carts, the chief mode of haulage when we were young. Standards were used when the farmer was bringing in the hay.  The box and dash boards (similar to a trailer) were used for potatoes, turnips, stones, sand etc.  Some people had a tumbling butt (the equivalent to a tipping trailer nowadays).  The cart was usually greased with butter before going to town.  Using the dashboard to keep the cart up high enough the wheel was taken out.  During the summer the wheels were kept wet to make sure the tyre stayed on.  We often watched Michael Gardiner shoeing a wheel.  The trick of one man loading a heavy plough onto the horse-cart was to load it from the front before the horse was tackled between the shafts.  The horse wore a winkers (bridle), collar and hames straddle and “britchin”.  The draught chains were secured to the hames and did the work of pulling.  The straddle took the weight of the load and the britchin was the brakes and the reverse.

The last harness maker in this area was Michael Hussey who worked at Corbetts in Athenry (now D.H. Burkes Supermarket).

Page 089 of The Carnaun Centenary Book 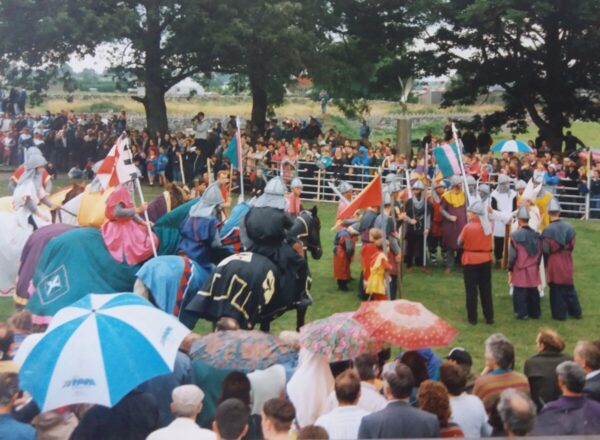