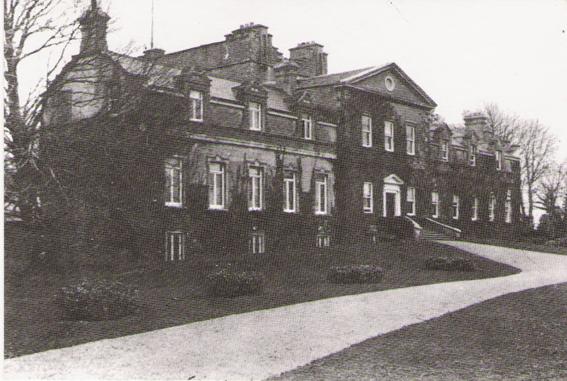 The history of Monivea begins with the story of the Ffrenches in the 12th Century, when their ancestor arrived in Ireland in the company of the Anglo-Norman invader Strongbow. Strongbow married the daughter of the King of Leinster and eventually became king himself. He rewarded his loyal men with lands of their own, the Ffrenches settling in County Wicklow. It was not until the late 16th century that the family moved west and bought the lands of the O’Kelly family in 1609, building onto the fortifications of the O’Kelly castle and establishing Monivea House. The village grew out of the dwellings of the estate’s farm workers and domestic servants, and of the merchant posts established to serve their needs.

Successive generations of the Ffrenches – and their workers  – worked hard to reclaim useful land from an estate which was mainly bogland. Oliver Cromwell came in 1650 and confiscated their lands, but once he was gone, they bought them back again and continued the reclamation process. In 1744, a descendant named Robert Ffrench inherited the estate and set about many improvements. 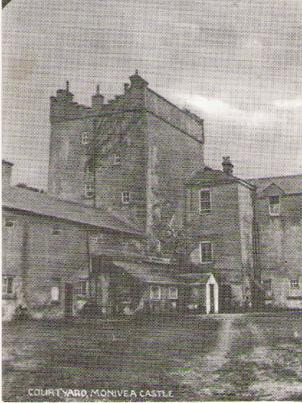 He drained bog land by ploughing, liming and seeding it, turning it into arable land within a few years.   He also set up a linen industry on the estate.  He built houses in the village to house the weavers and laid out the broad greens for bleaching and drying the flax.  He built a school for village children.  In another strategy to drain the land, he planted trees where Monivea Wood now stands.

The Ffrenchs were well respected in the county, enough so for Robert Ffrench to have represented Galway in the United Kingdom parliament between 1768 and 1776.

By the late 19th century the land was rich and productive, and another Robert Ffrench was employing the trappings of their wealth to extend his family’s high social connections, travelling overseas as a British diplomat.

In 1759 Robert Ffrench presented a memorial signed by most of the Protestant inhabitants of the village stating that Monivea was an appropriate site for a Chapel of Ease. This brand of ecclesiastical architecture is usually an ancillary church more accessible to some parishioners than the main church within the parish. They are sometimes associated with a large manor house where they provided a convenient place of worship for the family of the manor.

The Board of First Fruits granted Robert Ffrench £292 which was nearly 75% of the projected building cost and in January 1762 construction work commenced. In October 1769 the Archbishop of Tuam consecrated the church and Mr. Ffrench spent £2 3s 9d on his pew. He later bought two more pews, one for the children of the Charter School and the other for his servants and tenants. By the late part of the  1700s a pulpit was installed in the church with bible, prayer books and linen.  The church testifies that by this period a large Protestant community had grown in Monivea. 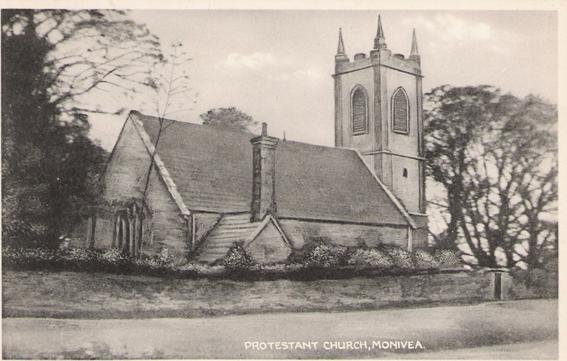 The Church continued in use until 1924. In 1955 the south end of the roof collapsed. The Dean of Tuam, J. Jackson, hired a contractor to take down this portion of the church at the cost of £78. The stained glass windows were removed by the Dublin firm Hogan & Co. and put into storage. Some of the windows were used in Dugort Church, Achill, County Mayo. The bell was given to Creggah Parish, Belfast who donated £20 to the Parish of Athenry.  Over the last 30 years the church has degraded into a ruinous state with lightning striking the bell tower and causing serious damage to the building.

Icehouses – buildings for storing ice – can be found all over the world, dating from the earliest times.  By the mid nineteenth century, most country estates would have had at least one. Until refrigeration was generally available, people lived on seasonal fare with inevitable fluctuations in supply.  Food was dried, salted, pickled in vinegar or alcohol, smoked, parboiled, potted or kept in sugar syrup.  Greater variety was available only to the rich who had living supplies in the dovecote, deer-park, fishpond and rabbit warren.  The wealthy supplemented that fare through the use of an icehouse, regarded as a luxury in the eighteenth century.

In 1786 an icehouse at Inberaray, Strathclyde, was constructed in four months and cost £25.  By this time, not only were new construction methods being used but there was also a new appreciation of the potential for food storage offered by the icehouse as demonstrated by the architect, John Papworth:  “the icehouse forms an excellent larder for the preservation of every kind of food liable to be injured in the heat in summer; thus fish, game, poultry, butter, etc., may be kept for a considerable time”.

Ice was collected from natural or artificial freezing ponds on the estate.  Efforts were made to keep the freezing pond as clean and clear as possible, sometimes posting a gamekeeper there to move twigs and scare away birds and mammals.  A head gardener and writer, Charles MacIntosh describes filling an icehouse: “the ice should be broken with mallets or stampers to a coarse powder and well rammed down in the well or pit, keeping the upper surface concave and adding a little water from time to time in order to fill up the interstices and assist the congelation of the whole into a solid mass”. Icehouses continues in general use until the end of the nineteenth century.   With the decline of country estates after the First World War, icehouses increasingly fell into disuse and overgrown examples were often rediscovered only by chance. The icehouse in Monivea Demesne was constructed by the Ffrench family to serve the castle.  The chamber reaches several metres underground and is well insulted at the top with stone and earth, thus enabling food to be kept cool in the hottest weather.  The shelter of the surrounding trees would also have helped to keep the temperature of the contents down.  This might explain the distance between the icehouse and the castle, which would surely have created extra work for the castle servants. The entrance was repaired in 2000 and a grille installed for the safety of the public.

Hidden deep in Monivea Wood, this magnificent mausoleum shelters the earthly remains of Robert Percy Ffrench, the last male landlord of Monivea Demesne and those of his daughter, Kathleen, who commissioned the building of the mausoleum. 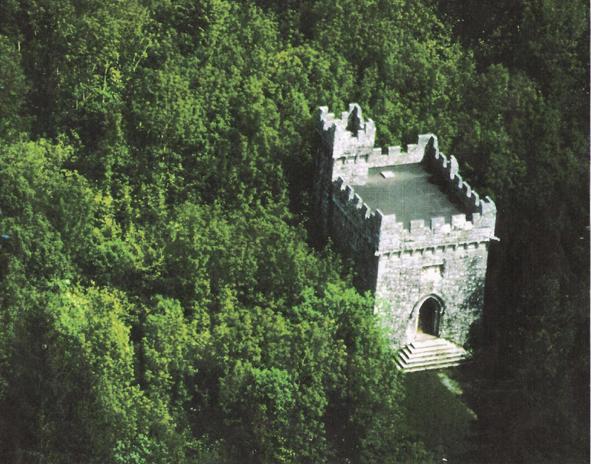 Born in Monivea Castle, Robert Ffrench was a member of the British diplomatic service and served as Secretary to the British Embassy in St. Petersburg and Vienna. He married Sophia, only child of Alexander de Kindiakoff, a Russian noble of great wealth with seven estates on the Volga River.  Robert died in Italy in 1896.  Kathleen, their only child, came to Monivea to oversee the building of the mausoleum.   His body was embalmed in Milan and remained there until the mausoleum was ready to receive him  in 1900.

Designed by Francis Persee, younger brother of Augusta Gregory, the mausoleum is a miniature castle built of finely cut Wicklow granite. The facade bears the coat of arms and the motto of the Ffrenchs “malo mori quam foedare” which translates as “Death before Dishonour”. The double oak doors open onto a funerary chapel vaulted in granite and floored in white and grey marble. The mausoleum is reputed to contain seven types of marble, including Connemara marble. 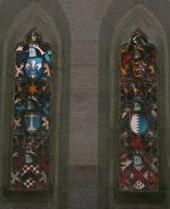 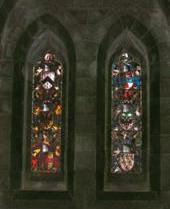 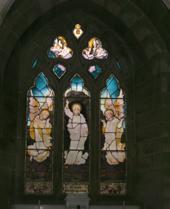 The chapel is lit by five fine stained glass windows made by a German company, Mayer of Munich.  The window above the altar depicts Our Lord with two angels.  Those on either side of the chapel show the coats of arms of the Ffrenchs and families related to them. 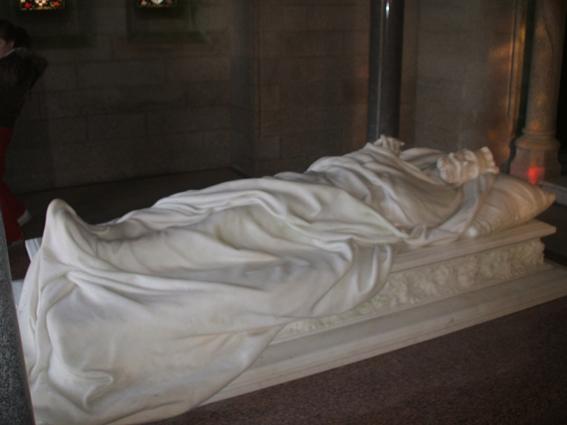 In the centre of the chapel floor before the altar is a splendid sculpture of Robert Ffrench lying in state in his robes of the Order of St John of Jerusalem, known as the Order of Malta.  It was carved by  Francesco Jerace, a renowned Italian sculptor,  in fine white Carrara marble, shipped to Ireland and brought to Monivea by horse and cart.  A black marble column stands at each corner of the effigy, supporting the vaulted ceiling.

The altar is intricately carved from fine white marble set against a background of black marble. Once her father had been laid in his final resting place, Kathleen returned to her Russian estates.  After the Bolshevik revolution in 1917, Kathleen’s lands were confiscated and she was imprisoned.  She was released in 1919, having lost all her Russian wealth and fled Russia via Finland.

A passion for international travel in her blood, Kathleen settled in Harbin, Manchuria, China, where she spent two years learning Mongolian.

She then crossed Outer Mongolia, the first non-Russian European woman to reach the then new Republic of Tannu Tuva (established 1924) and on to Peking, completing a round trip of over five thousand miles. 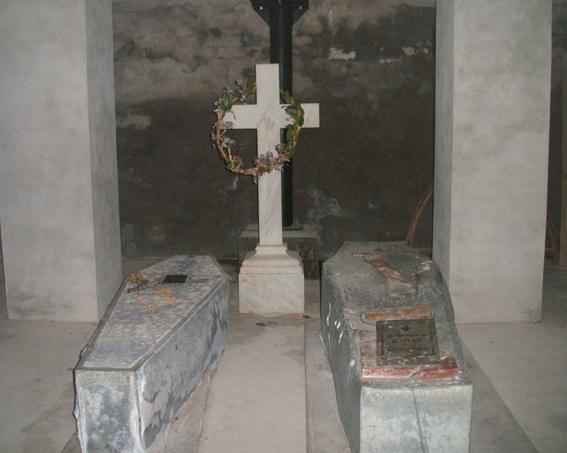 Her body was brought back to Monivea, a distance of four thousand miles.

Kathleen lies beside her father in the crypt of the mausoleum, reached via the winding stone staircase to the immediate left of the altar. 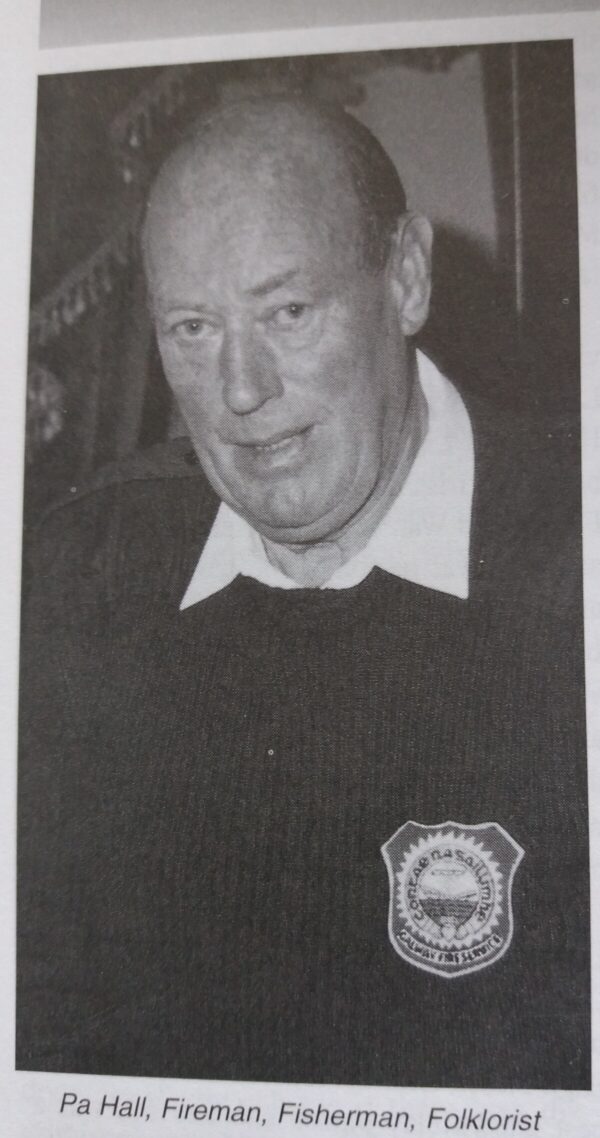 Hurling today dominates all other sporting activities in the parish an… by Pa Hall
Athenry Journal Archive | Education, People, Sport