Skip to content
Mystery of the Missing Mace and Seal

This Saturday, the final chapter of the Mystery of the Missing Mace will conclude happily when the long lost Athenry Corporate Insignia, the 14th century Mace and Seal, returns to home after a 160 year odyssey.

The story of the tracking down of the treasured items reads like a detective story with Athenry’s resident archaeologist Professor Etienne Rynne playing the role of the persistent sleuth who finally tracked down his quarry. Indeed the description of the said items could have been culled from the grizzliest of detective tales.  The mace itself is 11 inches long but one authority points out that it was not intended as a toy or to grace a civic procession: “It was a weapon which, when need required, might prove highly persuasive in the hand of a pretty man who preferred action to verbal argument.” The seal depicts a castle or town gate with two bearded human heads fixed on spikes, thought to represent Phelim O’Connor, King of Connacht and Teige O’Kelly, King of Uí Máine, who were slain along with thousands of their followers at the Battle of Athenry in 1316.  Let’s hope there is not a sequel entitled The Curse of the Missing Mace. The mace first went walkabout around 1840, reappeared in Dublin in 1875 and went missing again in 1899, not turning up again until it was brought to the National Museum of Ireland in June 1963 for recording and was offered for sale to the museum at the time. As chance or fate would have it the then Assistant Keeper in the Irish Antiquities Division of the museum was none other than Etienne Rynne who was involved in the recording of the details of, the mace and seal. His career then brought him to Galway as a lecturer in Archaeology at UCG and he set up home in Athenry where he soon became an authority on the town’s history and archaeology. He maintained an interest in the location of the mace and seal but finding a suitable home for these valuable antiquities proved an obstacle in the path of finally bringing them home for good.

Then with the restoration of Athenry Castle Prof. Rynne felt that at last there was a suitable setting to house and display the items and he contacted the last known owner to inform him of the good news. A letter was sent to H.C.A. Blishen at his home on the Isle of Wight, appropriately named “Athenry’ to inform him of the interest in Athenry of having the mace and seal returned.  But fate intervened again.  The letter was returned unopened.  Mr. Blishen was no longer resident at the Isle of Wight address and was untraceable. There matters rested until 1996 when a visitor to the Athenry Festival noticed a piece on the mace and seal (Professor Rynne’s letter) published in The Athenry Journal (by Finbarr O’Regan). The visitor was Tom Bermingham an authority on the Bermingham family which founded the town of Athenry in 1135 and he promised Prof. Rynne that he would take up the hunt for missing items. Now the real detective work began.  After chasing up a few unproductive leads Tom Bermingham contacted the Chancery of St. James in Buckingham Palace where he learned that Captain Henry Charles Adolphus Blishen was made MBE in 1944 and died in 1980. Drawing another blank he resorted, in best detective tradition, to the obvious and looked up the name Blishen in the telephone book and before long he was speaking to Anthony O. Blishen and the lost mace and seal were found yet again. And this time Athenry’s luck was in.  Professor Rynne explains: “Fortunately for the people of Athenry Mr. and Mrs. Anthony Blishen considered themselves more as hereditary keepers in the old Irish tradition of sacred reliquaries rather than owners of the Athenry insignia and are more than willing to return the treasures to Athenry if they were assured a good home and not locked away in a chest.”

Last year the professor and his wife flew to London to meet the Blishens and were able to assure the couple that Athenry’s new Heritage Centre was the perfect and most appropriate last resting place for the wandering mace and seal. And so this Saturday the 160 year odyssey will finally end when the Blishens travel to Athenry to officially hand over the town’s Corporate Insignia at a special ceremony in the Square at 8.30 p.m.

Ancient Mace and Seal make their return to Athenry (Record)

The Mace and Seal of Athenry (Record) 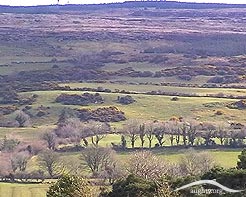 Jottings of my Life in Tyrone, Ireland – Nostalgic Memories

Nostalgic Memories I would have loved to return to our old home, and I… by Elizabeth La Hiff Lambert
General History Archive | Education, Environment, History, People