Skip to content
Pat Killeen and the Easter Rising

My Great Grandfather Pat Killeen, Carnaun, Athenry, joined the Cussaun Company of the Irish Volunteer’s in the year 1913 under the captaincy of Patrick Kennedy also of Carnaun and he took part in all the activities of the Company including attending parades and drilling.

In 1915 he attended the burial of O’Donovan Rossa in Dublin with the Galway contingent in the uniform, bandolier and haversack and was armed with a shot gun. In 1916 he mobilised with his captain and he attended a parade on St. Patrick’s Day in Galway. On Easter Tuesday, when the rebellion started in County Galway, he again mobilised at Cussaun Cross roads and the company marched to the Agricultural Station, known locally as “The Farmyard” under Captain Patrick Kennedy.

He was armed with a single barrel shot gun and wore a bandolier and haversack and carried six rounds of ammunition. On arriving at “The Farm Yard” Captain Liam Mellows called out to Captain Kennedy “to pick half dozen of our strongest men in the company” and Pat Killeen was one of the men selected.

Captain Mellows commanded the company to pull out hay bogeys and horse carts to block the roads at each entrance to “The Farm Yard” which the company then did by up-setting the carts across the roads.  After finishing that job Pat was ordered on outpost duty at the main gate leading into “The Farm Yard”. Armed with a shot gun, he was on duty from 11.00 p.m. to 01.00 a.m. when he was relieved.

Pat stayed in “The Farm Yard” that night and on the following morning at daybreak all companies were called up and he was ordered on outpost duty on the railway line towards Galway for about 3 hours. When he returned to the Farm Yard the companies were preparing to travel to Moyode Castle to continue the rebellion.

However Captain Patrick Kennedy told Killeen that he should go home as he was a married man with a wife and four children so accordingly he made his way home across country to Carnaun Village and the rest of the companies proceeded to Moyode Castle.

On his return from “The Farm yard” Pat went “on the run” for a week until things quietened down. Pat’s house was raided for arms by the military in 1917. He had been one of the members who raided for petrol which had been on its way to the Military. He brought home two containers of petrol which he concealed and later handed over to Thomas Blackhall at Cussaun Cross.

From the date of the Truce Pat was always available to be called up to take part in any activities and he continued to keep in touch with Cussaun Company and Captain Kennedy.

How Sinn Féin got its name 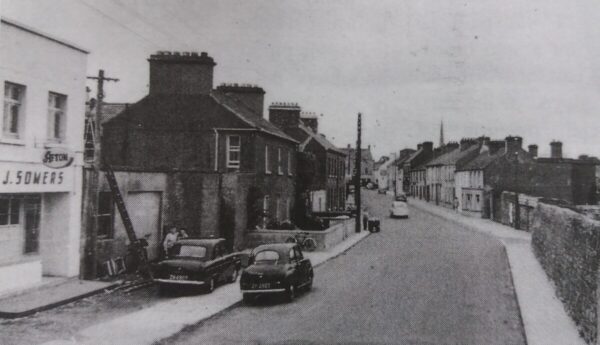 A Ramble around Athenry in the 40s Jimmy Somers 1995: Old Church Street

I will start in Old Church Street and am open to correction. My first… by Jimmy Somers
Athenry Journal Archive | Education, Environment, People