I was in 4th class when I really became aware of Deirdre’s presence in the same classroom. She was a pupil in 3rd class, the other class in that room. Of course, I knew her name and where she was from, and that she had been a pupil for a number of years, but it was only then that I became aware of how delightfully different she was from the other girls. The first stirrings of attraction were pleasurable but, in a peculiar confusing way, also uncomfortable. Her petite figure bearing a firm little head with warm brown eyes set in a milky white face sometimes partially obscured by her thick shoulder-length black hair drew me towards her while a part of me wanted to fight against that magnetism. After all I was one of the boys and we boys weren’t attracted to silly girls! In fact we usually shunned them and the only contact was verbal, and then mostly to annoy and tease them. Boys and girls shared the same classrooms, and indeed sometimes had to share the same desk, but that was as far as inter-sexual relationships went.

So even though the attraction continued to grow during the following weeks, I daren’t make anyone aware of my feelings. Instead I was careful to pretend indifference towards her as much if not more so than previously. In fact I was then so bashful that I couldn’t bring myself to give her the slightest inclination of my true feelings for her. So after a time the attraction began to wane, ﬂoundering on the barren rock of my timidity. I think I was beginning to accept the hopelessness of my situation and the inevitable failure of a relationship to evolve.
Then one evening she sang “Que Sera” for the teacher. It was the first time I heard the song and immediately fell in love with the music and rhythm of:

After that day I was inexorably drawn to her. I watched her closely sitting or standing to my left across the room, and listened with excitement to her firm but gentle voice as she regularly answered questions. I occasionally tried to brush gently against her shoulder while leaving or entering the room but yet no communication passed between us. The words “Que Sera, Sera” kept spinning around and around in my mind especially when she was within sight of me. I began to imagine the words were a means of communicating telepathically with her as when I whispered the words to myself I expected her to look towards me and smile. But there continued to be no recognition from her and she remained as preoccupied as ever with her work in class. In fact she was probably the best pupil in her class, another factor which raised her in my esteem, and encouraged me to make a greater effort at my homework and answer questions in class with greater frequency, and generally pay more attention to the teacher.

Around that time I was brieﬂy hopeful of making the school football team which would probably be a means of arousing her interest in me, but unfortunately it was a wild dream that wasn’t to be realised. I didn’t even make the substitute list. Still where there is life there is hope.

One afternoon Michael P., who was sitting directly in front of me, turned around and with suppressed laughter advised: “Look over”. Having followed his line of vision across the room the sight I beheld at first excited me and then quickly caused me to be harrowingly embarrassed and angry. Deirdre, who was standing with her back to the wall, had one foot on the bench in front of her in such a way that her skirt had fallen back exposing a white thigh running into blue knickers. The sight caused intense heat to creep over my spine and out to my shoulder blades while perspiration gathered on my brow. I instantly averted my eyes back to Michael P.’s pole. He was sniggering to his colleague beside him. I glanced over at Deirdre’s face hoping to attract her attention, but as ever she was concentrating on what the teacher was writing on the board while the situation had got worse! Her hand had carelessly dropped to the exposed thigh which she was now unconsciously scratching just above the knee.

Michael P. was now really enjoying himself, whispering and laughing loudly, but his colleague on the inside had his view mostly obscured and had to lean out across the former’s back. To facilitate Michael P. leaned sideways out of the seat. I could no longer tolerate what to me was abuse or defilement of my girl. One quick push and Michael P. was on the floor with his friend tumbling out on top of him, and in another instant the teacher was in front of them. Hands were quickly outstretched and several clashes of wood against ﬂesh followed.

I escaped punishment but I wouldn’t have minded as it would have been in aid of a noble cause. She had now changed position and while standing on both feet she was looking in my direction. I tried to smile thinly but her face remained vacant as if she was looking beyond me at the afternoon sky.

I left the school quickly that evening very mindful of the threat of retribution Michael P. had managed to whisper immediately after the incident. He was much taller than me and consequently I had no desire to play heroics, but I was also conscious that if challenged I would have no option but to accept even if I was to be destroyed. Coming from a rural agricultural background in the fifties, discretion was not the better part of valour. I would fight to exhaustion and injury, even death, rather than be known as a coward. In Carnaun National School the boys had regular fights, mostly on the way home. It was then the only means of settling disputes or gaining satisfaction for real or imaginary wrongs. These fights were usually fisticuffs, with irregular use of the feet. Knives were never used.

I had turned into the byroad about half a mile from the school when the shouting and jeering of a crowd charging down the road reached me. I just had time to hide a small stone in my right fist before they came up. “Now we’ll see the man yeh are”, Michael P. was shouting, running up to me. “What will be will be”, I thought, trembling from head to foot. He stopped close to me and putting up his fists invited me to attack. That I did, taking him completely by surprise. Getting to grips with him I managed to back him up against the gate of a field. I knew my only chance of success was to keep in close to him and keep punching upwards as he had a head at least over me. With my head pressed against his chest I punched ceaselessly, and recklessly upwards, first sensing the softness of his mouth against my stone-hardened fist and then I was not conscious of where my punches were landing, but I kept on punching while his fists pounded the top and sides of my skull.

Then there was an adults’ shout and we were shortly drawn apart. Pa John, a big simple looking farmer had each of us by an arm. He began laughing at the sight of us.

“Looks like the small lad had the best of it”, he said. His opinion didn’t then mean much to me as I was breathless and bruised, but I was glad to see Deirdre among the crowd of boys and girls who had gathered to watch. Michael P.’s nose -was bleeding profusely and he kept one eye covered with his hand while my head ached terribly and I could feel little lumps rising all over it, so to the observers, especially Deirdre, I would appear to be the victor.

We were ordered to get moving by the farmer who also threatened us with violence if he saw any more fighting. His orders instantly became my command. Despite a bruised and painful head I found the rest of the journey pleasant enough listening to my friends expressed admiration and praise. But I suppose there is a price for every success, and in my wildest imagination I couldn’t have foreseen  the price I was to pay.

Michael P.’s face looked pitiful the next morning: he had a black eye, split lip and swollen nose. Of course the teacher wished to be made aware of the cause of his injuries, but true to his sex and background he muttered they had been sustained through a fall in the haggard. She expressed cynicism over the veracity of the story but seemed intent on leaving things be as she turned away towards the top of the class when Deirdre suddenly called her attention and then informed on us. I was stunned. Despite being the teacher’s pet, I couldn’t believe that Deirdre would betray me. My love quickly turned to disgust and loathing for her.

I hated her! How could she? And to think that I loved her! To think that I was willing to be hurt even to be killed for her sake… Love! Love indeed! Wife… I was a fooleen or amadan… My own folly and her betrayal nauseated me. Fortunately, no one was aware of the silly feelings I had for her during the past months. I heard snatches of another girl’s confirmation of Deirdre’s account.

Then we were on our way to the master. But he could mete out whatever punishment he wished for all I cared. My whole world had suddenly crashed down or evaporated through the words of betrayal of that silly little twit. I cannot now recall what the master said to us but I know we escaped corporal punishment. He probably was of the opinion that Michael P. had already received enough punishment while wondering if one as small and weak looking as I really rendered such injury on him.

But he made us shake hands the effect of which dampened the hatred which still smoldered within me for him, despite my disappointment with Deirdre. I didn’t notice her very much after that as I passed up to the master’s room a few weeks later, and when she came to that room a year later I found there was very little about her which attracted me. She was still very pretty but also haughty and bossy and still showed little or no interest in me. During that year I hardly even noticed her or recalled the intensity of the feelings she had once unintentionally aroused in me. She was after all just a silly girl and even the senior boys showed little interest in girls.

Years later I met herself and her fiancé at a dance in Seapoint. She was talkative, friendly and even attractively warm that night. They both emigrated some years later, but whenever I hear the song “Que Sera, Sera”, she is in my thoughts.

Page 260 of The Carnaun Centenary Book 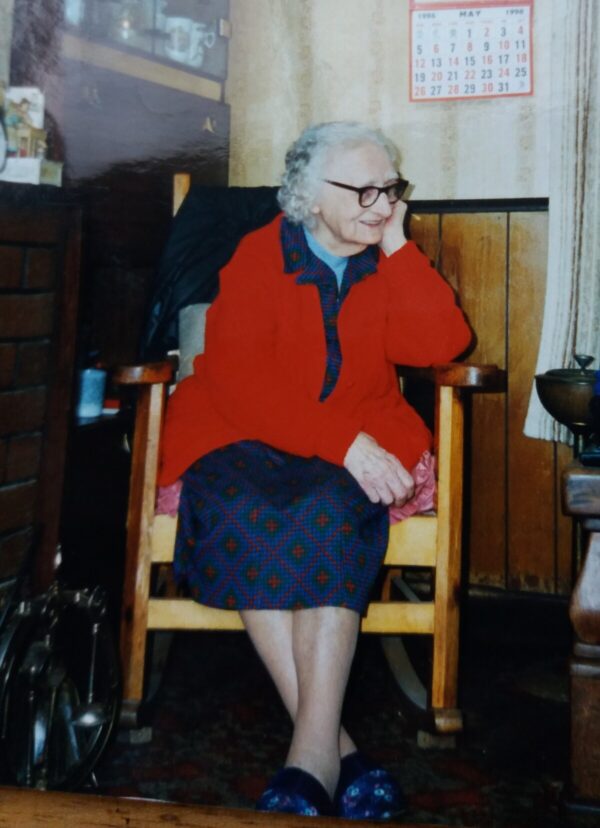