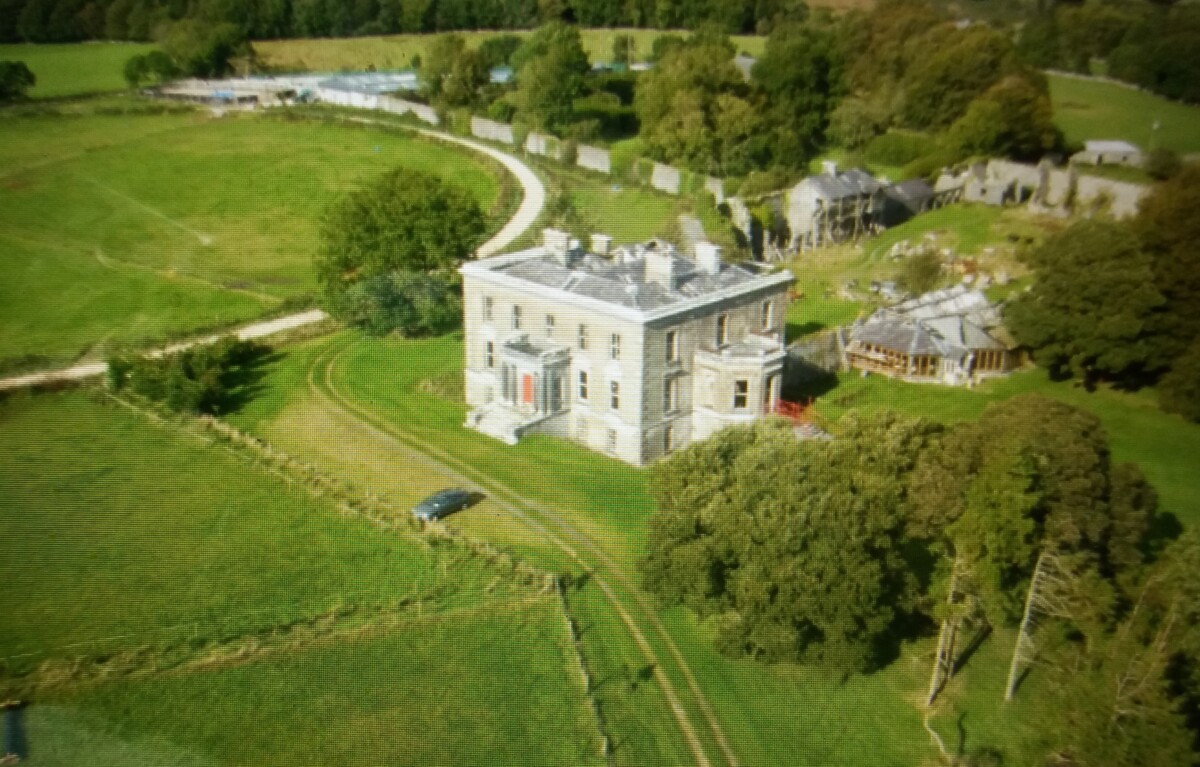 In 1961 Carnaun NS was being repaired and a new room was added to it.  While construction was in progress, the school had to be vacated.  Canon Conor Heaney found temporary accommodation for the three teachers and 116 pupils in Castle Ellen House. Mr Tim O’ Regan, Miss Mary Ellen (Babs) O’Regan and Mrs. Nora O’Regan were the three teachers at the time. The house itself was falling into disrepair, the gardens overgrown and neglected, but we, as children, were not in the least put out by this. We were totally in awe of the place.

Going to school in Castle Ellen was a wonderful and unique experience for us at the time. Imagine the mystique and exclusivity attached to a Landlord’s house.  One could never imagine a group of children having free access to such a place as this.  Yet this was a reality for us. Admittedly the Landlord’s ‘heyday’ had come to an end but the wonderful aura of the house and surroundings were still in evidence. Once you arrived at the gate and proceeded up the long tree-lined avenue you felt you were entering another world – a ‘narnia’.  The tall mature trees stood like sentries on either side.  They seemed so beautiful, strong and powerful and you felt they were   looking down at you wondering what business you had there. It was springtime when we arrived and the daffodils were in bloom.

At the end of the avenue, which seemed endless to me, a bend to the left brought you in sight of the house. Viewing this for the first time left an everlasting impression on a young mind. The grey three storey flat roofed building had a most austere and stately look about it – not your average schoolhouse. The spaciousness immediately grabbed your attention. The front lawn, our playground, stood out like a plateau amidst the trees.

My memory of the house is of very large rooms, marbled fireplaces, shuttered windows, a large staircase and entrance hall.  I was in awe of the ambience of the house.  Rumours abounded that a ghost was supposed to have inhabited an upstairs room.  The hole in the roof, the creaking floorboards, the rattling windows, the damaged stairway, the musty damp smell and the structure of the house all added up to give the place a creepy feeling. One felt that we the children were disturbing the natural order of it and were being watched by more than the teachers. We were confined to the ground floor because the unsound stairway leading to the second floor was a definite “no go” area.  But, of course, natural curiosity meant, that given a chance, we bounded up to investigate. If caught, one received a sharp rebuke from the teachers. The true historical value of the place was lost on all our young minds. Yet we were experiencing at first hand life in the Big House, tasting a lifestyle and a culture that was totally removed from us all.

Having left a building where the rooms were small and overcrowded, we found ourselves in large classrooms, with a wonderful vista of countryside around us.  This panoramic view meant that we were often scolded for lack of attention. The master’s room was the big room inside the front door to the left. This was the ideal place to observe the changing seasons. I envied the children who grew up in such a picturesque setting.

Education at this time was not very child orientated.  Repetition was the order of the day. We repeated everything so often something had to penetrate our uninterested minds, but any shortcomings this system had were overcome by this terrific setting. Here our schooling was at a more relaxed, leisurely pace. There was a real sense of freedom. Nature study was not part of the curriculum then, but we were absorbing it unconsciously all the time. Not in your wildest dreams could you imagine such a haven for the naturalist.  A love of nature and all things beautiful were fostered in my young mind forever. Looking back now this was the ideal place to embrace true knowledge, to awaken feelings and arouse our imagination.

I remember little or no black days but I recall plenty of sunshine and long playtimes (this may be due to the fact that we did not get holidays till the middle of July).  Playtime lasted or was supposed to be half an hour.  We had two small breaks at eleven and the other at two, weather permitting. Break times were a welcome respite from the drudgery of the classroom.  Outside we had our own special retreats. There were cobbled stone yards to the rear, which contained all the outhouses.  (One or two were used as toilets if I remember rightly. Later the stones were removed from here for the church in Portumna.)  The walled garden with an orchard was a rewarding place to visit in autumn. There was a sunken garden called a ‘Há Há’. We spent endless hours playing on the steps in front of the house and around the rockeries. These grounds were truly a child’s paradise, a place to satisfy the natural curiosity of school-going children. But it must have caused endless heartache for the teachers.  After playtime we were lined up in front of the house. It was difficult to drag us in from our hideouts. Naturally one or two pupils were often missing.  The roving students had to accept a telling off from the master on return.

During playtime we often met the caretaker Peter Doherty, a wonderful, kind and generous man who was always amused at our mischievous deeds.  One of his tasks was to ensure water was pumped up from the deep well in the centre of the huge coach yard. Tackling a pony to a long timber lever and walking the pony around in circles did this. Our neighbours were Pete and Brian Cahallan lived down a side road adjacent to the house. They were always in and out of the house and yard and very sociable.

Over the years Johnny and Gertie who lived in the Gatehouse have been there to welcome the Lambert descendants who have come back to visit their old home. They have over the years kept the Lambert grave tidy.  In September 1961 a storm called Debbie ravaged the countryside. Many of the tall trees fell victim to the storm. One fell across the avenue and a visiting inspector (An Cigire) had to abandon his car and walk up to the house. The teachers and pupils gave him an enthusiastic welcome. At times the well located windows were a real bonus for the teachers.

The pupils travelled to school on foot or cycled. This journey was extremely long for the Castle Lambert and Moorpark children. ‘School through the Fields’ was a reality for most. I missed these adventures as I travelled to school with my parents – the teachers. The long avenue again was the venue for the eager cyclists who raced each other home. My father was often forced to stop his car  (BIM-139) to settle minor disputes

This year the Lambert clans are returning to Carnaun to visit their ancestral homes Castle Ellen and Castle Lambert.  It will be a marvelous experience to share time with them and relive the experience of being part of their historical house. It was an enriching and rewarding time for us.

We returned to our own school the following September. We were impressed with the new room, the bright paint and the facelift our old school had got, but our migrant education in Castle Ellen was memorably   imprinted on our young minds.  Our holidays were certainly over, and we were back to our usual routine again.

A remarkable encounter for all!

Page 115 of The Lamberts of Athenry Book