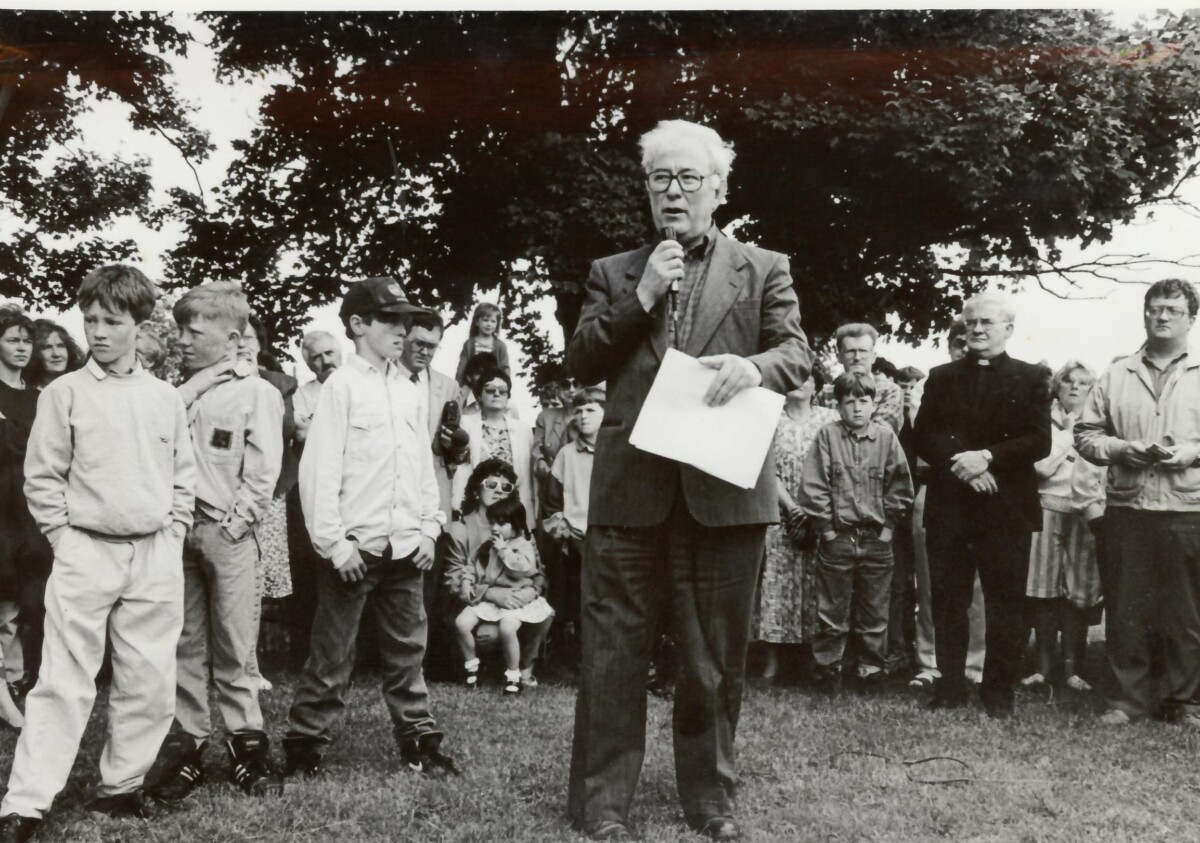 The announcement of Seamus Heaney’s Nobel Prize for Literature opened the floodgates to wonderful memories of his visit to Athenry.  He came to take part in a major literary festival held in June 1992 to commemorate Athenry born poet – Padraic Fallon.  The weekend featured a generous share of living Irish poets: Evan Boland, Paul Durcan, Rita Ann Higgins and many others.  The highlight of the weekend of course was Heaney’s presence.  Seamus celebrated the occasion with a reading of poems by Padraic Fallon as well as from his own work.  This took place in the Castle Park following his unveiling of the “Winged Horse” monument.  This monument was crafted by Fallon’s son Conor, a leading Irish Sculptor.  It was donated to the town by the Fallon family.  “No artist believes in winged victory alone”, said Heaney at the crowded unveiling ceremony. 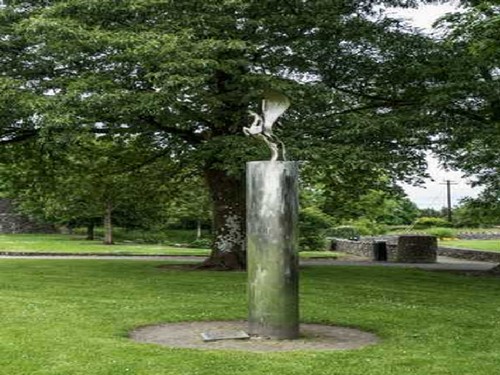 “Padraic Fallon’s image of ‘broken wings’ illustrates his sense of aspiration as well as his solidarity with failure – a combination which informs all successful creative work”. He paid tribute to Padraic Fallon’s achievement saying, “Fallon’s meaning deepens each year”.  Seamus Heaney, who cites Fallon as a big influence in his own development, wrote of him; “His sensibility has weathered in Galway the rainy light that was familiar to both Raftery and Yeats; it has been tutored by a landscape once elemental and historical; a landscape that holds the walled demesne and the tower as well as the bog face and the stone wall”. On the Saturday night of the Festival the presence of the future Nobel Prize winner contributed greatly to the wonderful atmosphere- a night of magic unparalleled in the life of Athenry.  His gentle and unassuming manner, friendliness and his own sense of enjoyment was felt by everyone who met him during his visit.  He was very much at home in our close-knit community and he expressed his enjoyment of the cosy, informal atmosphere of the Festival.  It was with a great sense of pride and pleasure that we learned of the great and well deserved honour bestowed upon Seamus Heaney as he became the 1995 winner of the Nobel Prize for Literature.

Letter from Seamus Heaney to the Padraic Fallon Celebrating Committee.

My turn to write, I greatly appreciated your note, but I have to say that the visit to Athenry was sheer pleasure.  The atmosphere in the town and the buzz of commitment among you all on the committee was quite unique. It’s along time since I was at such an event where the combination of sheer good-will and high intellectual and social purpose was so successfully combined.  It was a privilege to be asked to unveil the monument, and Marie and I thank you all again for the terrific hospitality.

All I know is a door into the dark.
Outside, old axles and iron hoops rusting;
Inside, the hammered anvil’s short pitched ring,
The unpredictable fantail of sparks
Or hiss when the new shoe toughens in water.
The anvil must be somewhere in the centre,
Horned as a unicorn, at one end square,
Set there immoveable: an altar
Where he expends himself in shape and music,
Sometimes, leather-aproned, hairs in his nose,
He leans out on the jamb, recalls a clatter
of hoofs where traffic is flashing in rows;
Then grunts and goes in, with a slam and flick
To beat real iron out, to work the bellows. 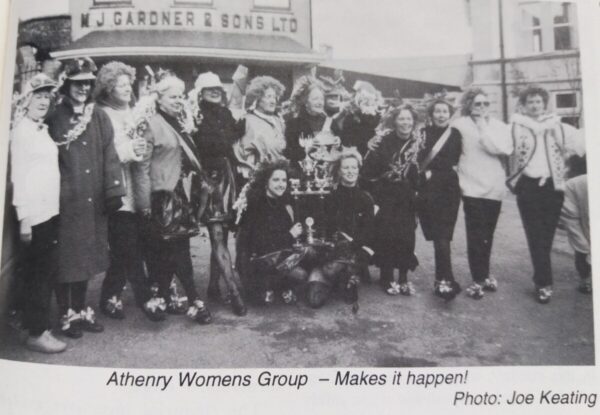