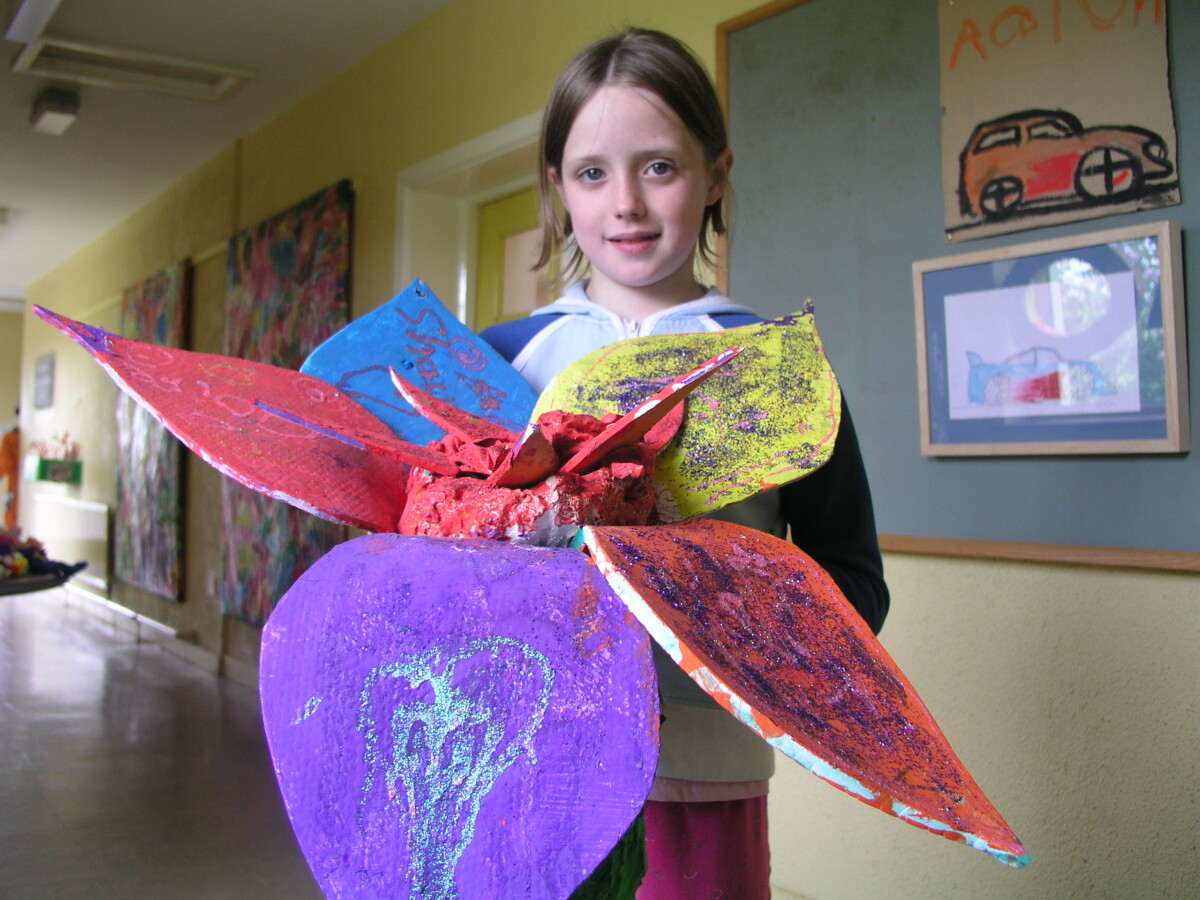 What are the benefits of an artist’s residency in a primary school, and why aren’t there more of them? Lorna Siggins looks at one model.

Lyshippe, an ancient Greek name for one who frees horses, has been a key idea for the Co Clare artist Elizabeth Porritt. “Horses were very much a part of my childhood,” she says. “It is a powerful feeling to ride fast down a beach in the rain with the smell of the horse, and the wetness of his coat, and your own sweat inside your jacket, face with reddened cheeks and eyes half-closed to protect from the rain. . . . It had been years since I had ridden, and I had lost my nerve a long time ago. But now it seems I am back with horses.”

The young curators of Porritt’s recent exhibition – also called Lyshippe – may not realise it, but she is indebted to them for the opportunity. The pupils of Carnaun National School, near Athenry in Co Galway, assisted her passage back to the “home” of her childhood; Porritt felt at times as if she was “allowed in to see and remember” what it was like to be there again. “I was reminded of things I said and did, of very honest reactions and expressions, and the ability to be in the moment, ever experiencing newness.”

The result? Both the Lyshippe project and ‘S Mé Ag Samhlaíocht (And Me Imagining), a joint exhibition involving Porritt and Carnaun’s 50 pupils as part of Galway’s Tulca season of visual arts.

The co-operative effort was devised by John Langan, a lecturer in sculpture at Galway-Mayo Institute of Technology who has been examining how artists can work with school students. He approached Finbarr O’Regan, the principal of the three-teacher school, with the idea of a six-month placement.

Carnaun is a progressive place: it was one of the first schools in Co Galway to earn a green flag, for its environmental awareness, and has an organic garden and heritage trail. O’Regan was delighted to provide a work space, and Porritt, one of Langan’s students, moved in last April. The final link in the chain was Galway County Council, which provided financial support.

The artists worked in tandem. While Porritt explored making horses from sackcloth and suspending them from ropes, as part of a video installation, 13-year-old Conor Feeney, 10-year-old Paul McCormack and other pupils used papier mâché, cardboard boxes and fertiliser bags to make Heaven On A Halfpipe, a skateboarding ramp that comes with video tribute to the skateboarder Tony Hawk. “He’s the world’s best, of course,” Feeney points out diplomatically as he and his colleagues give this non-skateboarding reporter a guided tour.

“She asked us to close our eyes and to listen to music, and to write down what we were thinking about,” the pupils explain, recalling the early days of the project. Mico V. Mozo, a 12-year-old from the Philippines, came up with a wonderful bird’s-eye view of Ireland and his native country, which he reproduced on paper. Thirteen-year-old Gerry Qualter borrowed a courgette, a pumpkin and some sweetcorn from the school’s organic garden to accompany his own lifesize organic farmer. “I put Vaseline on my face and made a plaster mould,” he says. “And I used cloth, chicken wire and timber for his body.” 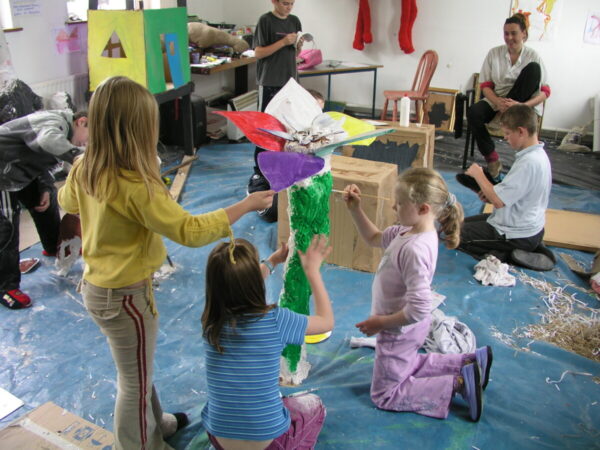 Conor Cooley, a seven-year-old with a keen interest in astrology, sculpted the archer of his star sign, Sagittarius, entitled Ronan The Centaur. Eleven-year-old Michael Mullins used pipe cleaners, foam and cardboard to create a GAA Field Of Dreams. David Williams’s Autumn Horse of chicken wire and plaster of Paris can fly with the aid of a toy aircraft on its head. “It’s a supersonic horse, and he used glue and water to make its body sleek and shiny,” remarks 10-year-old Melissa Langan, one of my tour guides, before showing me her own creation, Rapunzel, a series of plaits and braids made from wool and mounted on painted foam scalps. “I have long red hair, you see.”

The younger pupils had great fun as they worked together to music. The junior infants went wild with paint and crayons as they traced their hands and feet for Hands In Colour; the senior infants rolled and wriggled on large sheets of paper to trace their bodies for Freedom In Colour. First and second classes burrowed for cardboard boxes to create Bird Commune. “That’s a sweet jar and a toilet roll for a chimney on top,” the guides say, pointing out the crêpe paper and moss applied for a garden effect.

Eleven-year-old Róisín Qualter’s Day Dreaming led her to mould her initials from cardboard and foam, helped by nine-year-old Emma Rabbitte, while 10-year-old Aoife Maguire and nine-year-old Shauna Flaherty used foam, plaster of Paris and glitter glue for a larger-than-life flower, their tribute to happy memories.

“Aaron just thinks of nothing else but cars,” the guides remark, introducing nine-year-old Aaron Butler’s Car World, which aims to show that cars are “not just killing machines”.

Mozo, 11-year-old Edward Flaherty and eight-year-old Gemma Costello worked with cardboard, timber and part of a tree to make Happy Tree House, while 11-year-old Paul Treacy transformed his interest in robots into an automatic Time Keeper, holding a large egg timer and relying on a floppy disk for his brain. “The children developed their own vocabulary for art and were incredibly supportive towards each other,” says Porritt. Interpreting that work for visitors became part of the project, and the pupils made postcards of the exhibition to send to other schools.

“I think a trip we undertook to the Irish Museum of Modern Art may have been a turning point,” says Porritt. “They saw work that other children had done, they were able to look at contemporary pieces and it gave them a sense of its being very important.” The pupils created responses to their IMMA visit in clay, which were then fired, glazed and displayed.

The culmination of the project was a debate on the place of art in education between John Langan, senior IMMA curator Helen O’Donoghue, Galway County arts officer Marilyn Gaughan and Galway Arts Centre’s Michael Dempsey. “The discussion raised fundamental questions about the demands placed on teachers under the revised primary-school curriculum of 1999,” Langan says. “It also raised serious questions about the way we educate art students and how we prepare them for graduation. Are artists now prepared to become part of a community in the true postmodernist sense rather than working in isolation?

“The new visual-arts element to the primary-school curriculum takes a more holistic approach and allows for interaction with artists and visits to galleries. But it is asking an awful lot of teachers, who may be given minimal time for in-service training. IMMA has a very good programme, and there is the Department [ of Education and Science]’s support unit for teachers, but the curriculum also talks about partners, and perhaps this is the direction it should take.”

Porritt says she gained enormously from the collaboration, and she now plans to move to Athenry. She had the run of the school during the summer break but found she wasn’t so productive. “The atmosphere had changed. Somehow it wasn’t a work space, and it had lost some of its creative energy, because the children weren’t around.”

Langan says residencies may not work in some schools – and may not be a priority for teachers or parents – but he was struck by the sense of confidence the project imbued in the Carnaun pupils.

A school in Galway city – St Nicholas’s National School, in Claddagh – has had the vision to employ a full-time art teacher in a dedicated art room. There was also a very strong visual-art dimension to this year’s Baboró children’s arts festival in the city, as reflected in an exhibition of work by pupils at the Rosedale and Fairlands schools for pupils with learning disabilities. Holly Mullarkey, an art teacher, and Áine Kelly, a speech and language therapist, helped them make art with rushes, brooms, branches, grasses, brushes, fingers and hands. The 56 works are on view over Christmas at Galway City Library.

Porritt believes artists could benefit from making themselves available to several schools in an area rather than a single one.

Although Tulca has ended, Finbarr O’Regan has no plans to take down his pupils’ art, as it has generated so much interest. Porritt will be leaving her video installation up until the school closes for Christmas, later this week. “In a sense the results of Carnaun will only be apparent in the future,” Langan says. “But one certainty is that wonderful things can happen if you are open to taking risks.”

You can make an appointment, (until Christmas 2004) to see Lyshippe and ‘S Mé Ag Samhlaíocht, by the children of Carnaun National School with Elizabeth Porritt, by contacting Finbarr O’Regan. 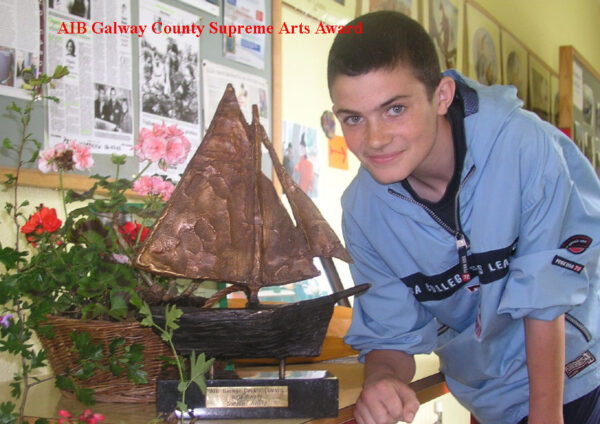 An east Galway school which is best known for its wonderful butterfly and organic garden and heritage trail unveiled its contribution earlier this week to Galway’s TULCA Visual Arts Festival, writes Lorna Siggins. Pupils of Carnaun National School, in Athenry, joined artist Elizabeth Porritt at the opening of a joint exhibition of their work.

Porritt has been artist-in-residence at Carnaun for the past six months, and the school has been enriched by the experience, according to its principal, Finbarr O’Regan. The residency came about as a result of contact between O’Regan and John Langan, a lecturer at Galway-Mayo Institute of Technology, and was supported financially by Galway County Council. Entitled ‘Transcending the Territory’, Langan’s project aimed to link the security of the school environment to the experiences of broader society by introducing a professional artist and “creating experiences that the children could take with them into the world”. Part of the residency involved taking pupils to the Irish Museum of Modern Art.

The Carnaun exhibition remains on display until December 3rd, with viewing between 12 noon and 2.30 p.m. daily and on Wednesday and Thursday evenings from 7 p.m. to 9 p.m. by appointment with the school (tel: 091-844668). On the evening of December 2nd , just before the show ends, the school will hold a seminar on the place of art in the school and classroom, on children’s creativity, and on the value of residencies in schools with particular reference to the Galway experience.

Participants on the night will include Helen O’Donoghue, senior curator at the Irish Museum of Modern Art; Marilyn Gaughan, arts officer on Galway County Council; and Michael Dempsey, of Galway Arts Centre, in Dominick Street, which is coordinating TULCA with eight arts organisations. 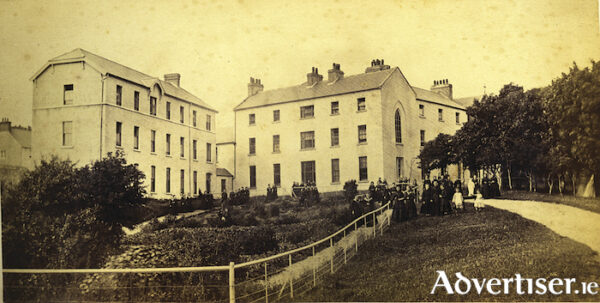 Jottings of my Life in Tyrone, Ireland –Taylors Hill Convent

Taylors Hill Convent We had been at Tyrone about a year when another e… by Elizabeth La Hiff Lambert
General History Archive | Education, History, People