When Meiler de Berrningham came to settle and establish the town of Athenry, he most likely brought with him a large number of trades — people to build a settlement and then to continue to service the needs of its people. As he came from a part of England that was industrious, his trades – people were much more advanced in their work methods than the native Irish. The most important trades at the beginning would be stonemasons and builders. Then there were also carpenters, blacksmiths, weavers, millers, harness makers, and shoemakers to name but a few.

The blacksmiths could be divided into two categories. The most common one was the general smith, of which there was one in every big village. Some of the landlords had their own smith. His work involved the practice of horseshoeing both for the gentry and the farmer. He also manufactured gates and repaired farm implements. He contributed to domestic life by making the crane that held the boiling pot over the fire, the pot hook that connected the pot to the crane, the tongs that attended to the fire and, in the event of an accident, he could be called on to put a leg on the pot. A smith who concentrated mostly on the shoeing of horses was called a farrier.

With the arrival of the railway in the middle of the last century there was a huge increase in the demand for blacksmith’s work. The huge amount of earth to be moved to make way for the laying of the line, had to be done by horse and cart. All those horses had to be shod. Then, when the line was laid, the points and signals depended on the blacksmith to make them work. Even as recently as twenty five years ago it was common to see the blacksmith with his portable forge carrying out repairs down at the station.

The principle source of entertainment in those days was the circus which arrived two to three times a year. The circus came on a large fleet of horse-drawn wagons which would always insure a long and busy day’s work for the local smith. The second type of smith was known as a coach smith. His work involved fittings for coaches, sidecars and traps. He also specialised in ornamental work. The two smiths had one thing in common, they both worked in a building called a forge. Every blacksmith made the most of his own tools. A lot were special tools. There was some essential equipment that a forge could not function without. Those were the fire, bellows, anvil, water trough and a selection of tongs, hammers and punches.

Undoubtly the oldest remaining blacksmith family in the area is the Madden family. Their graveslab in Willmount Cemetery has inscribed on it a set of blacksmith tools, and states the blacksmith’s name as Thomas Madden who died in 1806, aged 65 years, which tells us that the tradition in that family goes back well into the l7th century. They originated from Bottom Road near Sice’s house in Boyhill where the remains of the old forge is still to be seen. From there they moved to Boyhill opposite the New Cemetery where Eddie Madden currently lives with his wife and family. Here they mainly concentrated on the making of spades and often offered them for sale in the Market Square on a Sunday morning.

In the 1860s one of the family, Thomas Madden, moved to Knockanglass and started a forge where the tradition is expertly carried on to this day by his grandson Eamonn. Another very old blacksmith family that worked in the Athenry area was the Tannions. Their graveslab, which also carries the carvings of the tools of the trade, is to be found in the Dominican Priory. This family are still involved in blacksmith work in Kilchreest and in Lisatunna near Thor Ballylee.

Paddy Murphy had a forge in Barracks Street where John Lawless’ workshop now stands. This is where Pat Brody served his time to the blacksmith trade. Pat, father of Eamonn and Frank, was a famous blacksmith and farrier. He later worked in Madden’s for a number of years, where he was joined by his nephew Jim Keane who came to learn the trade. Later he moved to Swangate where today Eamon, a master farrier in his own right, has a modern Engineering Works where the forge originally stood.

Dick Williams had a forge in Carnaun. Jim Reilly had one in Castle Ellen, Jack Leary, father of Phyllis Rabbitte of Ballydavid, had a forge in Caherfinsker. There was a forge in Ballydavid which was run by Gorry Grady. The Heavey family in Cloonkeen also had one. In Newcastle the forge was operated by Jim Molloy and continued on by his son Jimmy who was father to Frank and Sean and uncle to P.J., an outstanding hurler.

Pat Quinn’s forge was situated in Cross Street and his work was continued until recent years by Christy Flynn. Christy specialised in ornamental railings and gates. Michael Quinn also had a forge in Old Church Street where his son Michael now lives. The last blacksmith to work there was Pat Reilly who was Jimmy Reilly’s father. Jimmy’s family now run The Flowershop in Old church Street. Pat came from a family of blacksmiths who operated a forge at Roundfield, Monivea. In Knockbrack the Gardners, who were experts in making coaches, traps and side-cars, made their own fittings and did all their own blacksmith work. Their tradition is still carried on by Paddy and Gabe in The Square.

Other smiths around the fringe of the Parish were the Dooleys of Esker, Hurneys of Cregmore, Kennys of Craughwell (after whom Kenny Park is now called) and Murphys of Kiltulla. A very famous smith called William Spratt worked in Coolarne. The quality of his work was of an exceptionally high standard. He was brought from Northern Ireland by the landlord Meldon. This forge is operated up to the present day by the Conneely family.  There was also a number of “journeyman” smiths who frequented the area from time to time. Traditionally the forge was a popular meeting place where passers by could drop in for a chat and to hear all the news of the countryside. To ensure that the trade of the blacksmith will be carried on into the future, Eric Connolly of Castle Lambert is one of many who have served their time to the trade in recent years and is a farrier of great success. 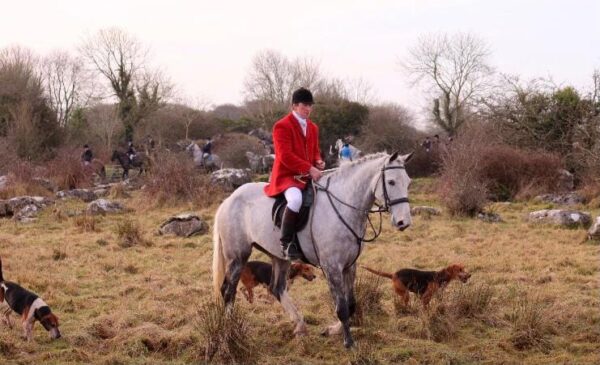 The Galway Blazers: A Lambert Legacy

The following are the minutes of the first meeting at which the County… by Edmund Mahony
Lamberts of Athenry Archive | Education, People, Sport