Nowadays people tend to forget the importance of penal times.  We should appreciate the faith of our neighbours and relations who have gone before us.  It was they who kept our sacred religion alive in Ireland during the penal times and many lost their lives doing so.  We have all heard the stories of the altar rocks, people walking through streams so their footprints could not be followed by the soldiers and of the famous penal crosses.  When I was in national school our teacher told us that one had been recently found by the Coen family in Joyce’s old house in Carnaun and that it dated back to 1781.  It was displayed in the school during the centenary celebrations in 1991, hanging on the wall in all its glory something to be respected and admired.

The cross is 28cm long and 9.5 cm wide at the arms of the cross.  On the back is the date 1781 thus fitting in exactly with the penal times.  There are three obvious symbols of the passion placed around Our Lord’s body.  These are a spear, ladder and a cock and a pot.  The spear was used to pierce Our Lord’s side by a Roman soldier.  The ladder is a symbol associated with the act of crucifixion itself and the taking down of Christ’s body from the cross.  On penal crosses it is always on the left side of the lower shaft.  The cock and the pot represents the story of when Judas went home to his wife and told her how scared he was that Jesus might seek revenge when he comes back from the dead.  She told him that there was no more chance of Jesus rising from the dead than there was the cock they were having for dinner jumping out of the pot.  No sooner had she said this when the cock jumped out.  This is why the cock is always carved higher up on the shaft than the pot. The cross is covered with stain and varnish but on reading Penal crucifixes by A.T. Lucas I found there should be many more symbols on it than those easily seen. Dr Lucas says that all penal crosses are more or less the same because they all originated in the vicinity of Lough Derg.  They were sold to the pilgrims for use during the devotions and were brought home as souvenirs.  Apart from the obvious three there should be ten other symbols.  These were three dice, a hammer and pincers, a sun, moon and stars, a halo, a chalice, Veronica’s veil, a skull and crossed bones or a cherub’s head, three nails, the scourges and the cords.  The dice were used by the Roman soldiers to decide who would win Jesus’ clothing.  The hammer was used to impale Jesus’ hands and feet and the pincers was used to pull them out again.  The sun was usually to the right of the cross and the moon to the left.  Usually the sun is shown as a rayed disc, the moon as a crescent and they both may have human features.  The halo was that of Christ and the chalice was used at the last super In early representations Veronica’s veil is often displayed fastened to two staves and bearing the impression of the Sacred Countenance.  The skull and crossed bones like the other symbols are associated with the passion. It is found on many of the seventeenth-century chalices and on a number of the older tombs.  In more elaborate arrangements of the Passion symbols two or three scourges are shown.  They are provided with short moulded handles and lashes consisting of three or four cords or thongs.  The cords were used to bind Our Lord to the pillar. They hang from the left arm of the cross where they appear more or less parallel sloping down and outwards from Christ’s wrist.

I would like to see the cross cleaned and restored to its original state and then the other symbols may be seen more clearly.  I am glad to be able to write about this particular cross and would like to thank the Coen family for keeping it safe and allowing us to study it.

Page 154 of The Lamberts of Athenry Book 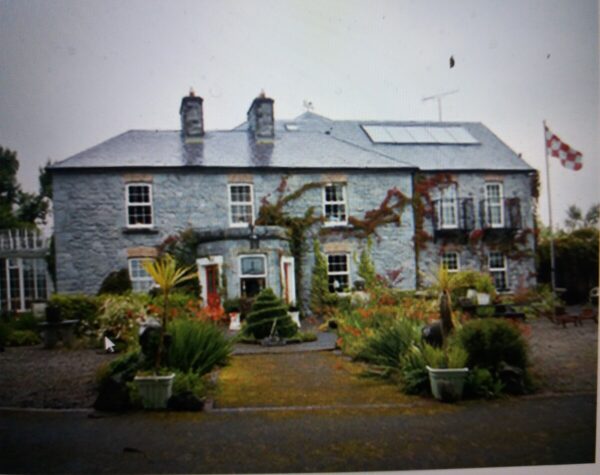 Rockﬁeld House was lived in by the Catholic branch of the Blake family… by Aggie Qualter
General History Archive | Education, History, People, Politics