Early on Sunday morning a large force of police under Mr. Leathan, District Inspector R.I.C., arrested five men – farmers’ sons – in the Craughwell, Co Galway district, in connection with the murder of Constable Martin Goldrick at Grinnoge, in that locality, on January 22nd. About a fortnight ago two of the men now in custody (Hynes and Dermody) were discharged after a detention of five weeks in Galway Jail. The re-arrests, coupled with the inclusion of other suspects, threw the entire neighbourhood into a condition of the most intense excitement.  The names of the prisoners, who were brought to Athenry, are – James Cahill, Michael Dermody, Thomas Hynes, Michael Conway, and Thomas Callanan.

Besides being charged with the murder of Goldrick, the prisoners are accused of wounding two emergency men. County Inspector Smyth, since the fatal shooting affray, has been practically living in the Craughwell district, and a large force of police has of late been employed in the locality. The prisoners on Sunday morning were taken into the Athenry Constabulary barrack yard, and the two men from the town placed amongst them.  By the morning train from Ballinasloe there had arrived in Athenry a labourer in charge of a large escort of police.  This man was conducted to the barrack yard, and confronted with the group of five prisoners and the two local men.  Having examined all of these, he placed his hand on two of them. One of the men so identified is said to have got angry, and there was a scene of much excitement. Shortly after the other prisoners were released and two retained in custody.  The latter are: – Thomas Hynes and Michael Dermody. In a short time the two, both handcuffed, were brought in charge of a large body of police to the railway station and conveyed to Galway along with the man who had identified them.  There the accused were
brought before Mr. A. C. Newell, R. M., Ballinasloe, and, after the production of some startling evidence were remanded in custody.

The Eye Witnesses Story When Hynes and Dermody were placed in the dock in Galway Courthouse, charged with the murder of Constable Goldrick, the chamber became quickly thronged with spectators. Mr. J. W. Blake, Crown Solicitor, at once placed the man who had identified them in the witness chair.  Then it became known that his name is Bartley Naughton.

The Crown Solicitor read a deposition made by Naughton on March 20th, before Mr. Newell, R. M.  In this he stated that he is a labourer who works from place to place where he got jobs. On the night before the Craughwell murder, he said, he slept in Athenry, in Chapel street, leaving the town early next morning without breakfasting, and without obtaining a drink, which he tried to get, as the public houses were not then opened. “As I came close to the railway bridge near Craughwell,” the deposition proceeded, “I heard some shots.  I saw a man running to the bridge from the Craughwell side.  The man went back again towards Craughwell; he did not come as far as me. “I looked into then crags where the bushes were on my right hand side.  I saw a policeman there.  He was running after three fellows.  I did not see any gun with him.  The three fellows had guns.  When I saw the policeman he was a good bit from them. When he was very close to them the three men turned back. “One of them fired a shot, and I saw the policeman fall.  After he fell I could not see him on the ground.  There were bushes between me and him. The third man was walking on at this time. “The two men went about three or four yards towards the third man after the policeman fell, and then turned and shouted at me to wait for them.  They were running towards me.  I stayed at the bridge, and they ran up and came on to the road.

“One of these men was bigger than the other.  The big man pointed the rifle straight at my body and told me he would have my own life if I said anything. “I told him I would not, that I was the same as themselves.  They then ran back the way they came, until they were about half way to where I saw the policeman fall.  They charged the guns there, and two of them ran on to the place where I saw the policeman fall, and the big man straightened the gun down on the spot where I saw the policeman fall and let off another shot (sensation). “The two then ran away from the crags.  When I first saw the policeman running after the three men I saw five other fellows running from the crags.  They were a good bit away from me.  I noticed the two men who came up to me had their faces blackened.  The taller man, who presented a gun at me, was not as blackened as the other.  I left the bridge after the last shot and went into Craughwell.” Witness went on to say that he met two policemen cycling very fast on bicycles, and a man whom he knew by his face to be a blacksmith.The deposition went on to relate – “I was in Craughwell the evening the prisoners came out there. I saw a number of people coming out from the train together. Amongst them I saw the man who pointed the rifle at me the morning the policeman was shot. I heard people calling him by the name of Dermody.” Witness proceeded to narrate that he again saw this man drinking on St. Patrick’s Day, and was quite sure he was the man who had pointed the gun at him, and who went back and fired the shot at the place where the policeman lay. Naughton added that he had been in the militia, and knew the difference between a rifle and a revolver. The reading of the deposition having been completed, Naughton confirmed it. Asked by Mr. Blake if he saw the man in court who had pointed the rifle at him on the morning of the murder, Naughton turned to the dock and pointed out Dermody, saying it was he who had fired the second shot at the place where the policeman lay. Witness also identified Hynes as the man who came up to him with Dermody. Hynes had then a double-barrelled gun. The prisoners were asked if they had anything to say. Dermody replied in the negative, and Hynes that he would say nothing for the present. Both the accused were then removed to prison heavily guarded. 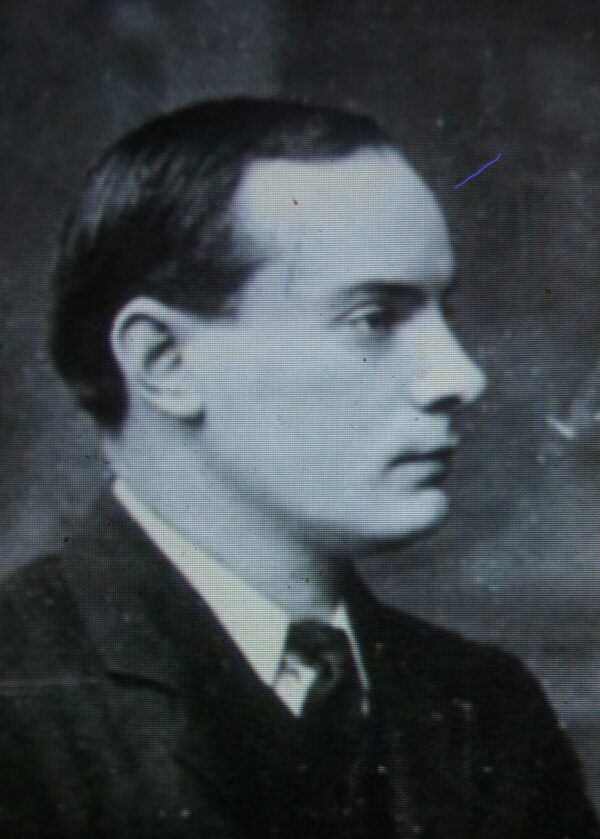 Dick Murphy, who was the County Centre of the I.R.B. for years before… by Finbarr O'Regan
Easter Rising Archive | Education, History, People, Politics