Skip to content
The Dominican Priory of SS. Peter and Paul

Meiler de Bermingham, 2nd Baron of Athenry and founder of the town, bought the site from Sir Robert Breynach ( Breathnach / Welsh / Walsh) for 160 Marks in 1241 and presented it to the Dominican friars together with another 160 Marks so that they might build an abbey – reputedly at the request of St. Dominic himself; the saint, however, had died in 1221. He also gave gifts of wine, English cloth, and horses for drawing stones, and furthermore induced his knights and soldiers to contribute to the work.  Meiler himself died in 1252 in a battle near Cashel, Co. Tipperary, and his body was brought back to Athenry and buried near the high altar.

Note the earthen “ramparts” between which was the outer moat.

Dedicated to SS Peter and Paul, building got off to such a fine start that a provincial chapter was held there in 1242.  Both the native Irish and colonising Anglo-Normans co-operated in sponsoring the construction work: Felim O’Connor, King of Connacht and founder of the Abbey of Roscommon, built the refectory, Eugene O’Heyne the dormitory, Cornelius O’Kelly the chapter-house, Walter Husgard the cloisters, Arthur MacGallyly the infirmary, Bernard O’Trarasy and his wife the guest-house, and Rodolf Hallatune gave the altar in the chapel of the Blessed Virgin; Thomas O’Kelly, Bishop of Clonfert, built a vault near the north side of the high altar.  The priory was completed in 1261. In 1324 William de Burgh (Burke) and his wife Fionnula gave 100 Marks towards building the front of the church (the west end, now largely destroyed by a handball alley built into it about the turn of the century) and also lengthened the choir of the then rectangular building by extending it eastwards by 20 feet.  The north aisle and transept were probably built about the same time; worthy of note is the transept’s fine north window, with its tracery of curved-sided triangles, best paralleled at Merton College, Oxford, in the Bishop’s House and Chapter House at Wells, Somerset, and in the Great Hall of The Desmond Castle, Newcastle West, Co. Limerick.

In 1400 Pope Boniface IX granted a Bull of Indulgence to those who visited the priory on certain festival days and who contributed alms towards its upkeep.  In 1423 the priory was accidentally burnt and Pope Martin V granted another Bull of Indulgence to those who contributed to its repair, an indulgence which was renewed in 1445 by Pope Eugenius, there being about thirty friars there at the time.  Alterations made during this lengthy period of rebuilding included reduction of the size of the east window, replacing its ornamental cusped tracery by the more severe switch-line variety, the insertion of an altar-alcove into the north wall of the choir, the replacement/insertion of the north doorway into the transept, and the heightening of the roof of the cloistral ambulatory. The major change, however, was the construction of a large central tower, which necessitated strengthening the aisle’s columns and reducing its arches; under the tower was erected a roodscreen, of which there are only three other examples in Ireland.

The priory escaped suppression in the Dissolution of Henry VIII, thanks to the intervention of Deputy Anthony Sentleger who in a letter dated the 7th of July 1541 stated that as it “is situated amongst the Irishry … our saide sovereign lord shoulde have lyttle or no profit”, despite which the custos of the friary Adam Copynger, and his fellow-friars had to agree to change “their habit and wedes of a friar into a secular habit”.  In 1510, however, Queen Elizabeth I granted the friary buildings and lands to the provost and burgesses of Athenry for 26/6 yearly. In 1627 Charles I granted the priory to four Galway merchants as assignees of Sir James Craig (a Scotsman associated with the Plantation of Ulster) to hold it for the king.  These merchants, however, were well-disposed towards the friars and the Dominicans were therefore able to re-establish themselves in Athenry in 1638.  There followed a brief period of restoration work, the sacristy and perhaps the hagioscope/’leper squint’/’penitent’s cell’ in the south wall of the nave apparently being additions dating from then.  In 1644, during the period of the Confederation of Kilkenny, the priory of Athenry was erected into a University for the Dominican Order by the decree of a General Chapter held in Rome.

Disaster befell the monastery in 1652 when Cromwellian soldiers wrecked the buildings, a record of which is to be found on a carved stone plaque dated 1682, now mounted in the north wall of the church.

In the mid-18th century the cloistral buildings were demolished and a barracks for a regiment of English soldiers built there.  These soldiers are recorded as having broken or defaced nearly all the tombs and other carved stones in the priory.  About 1850 the soldiers moved to the new barracks built in Cross Street, and about 40 years later the abandoned barracks was demolished and the houses of Abbey Row built. 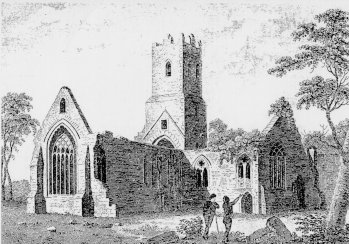 An illustration of 1793 shows the church roofless but with its central tower intact.  The tower, however, fell in 1845, the best evidence remaining for its former existence being its spiral staircase which can best be seen from the outside.

Quite apart from the interesting architectural remains, the priory it also noteworthy for many fine grave-slabs and for two fine tombs.  The grave-slabs include a long, low, house-shaped one with a cross carved in relief at either end which is most probably the grave-marker for Meiler de Bermingham, founder of the priory.  Most of the other grave-slabs are of 17th century date. These include a fine one dated 1627 for John Burke and his wife Katren which is not only carved with an intricate cross and animal figures but also has interlaced patterns carved along some of its bevelled edges.  Many of the slabs show the tools associated with the person buried, in most cases farm workers whose graveslabs were marked with a plough-soc and a coulter; only one, dated 1697 and for William Boyne, has a complete plough carved on it.  Worthy of note also is the grave-slab mounted against the wall inside the present entrance which is dated 1631 and not only has a triketra knot carved on it but also a large woodworker’s axe head, an anvil, and other tools.  The finest such grave-slab, however, is that of blacksmith called Tannian.  It is dated 1682 and carved with a cross on either side of which are two bellows, an anvil, a horse-shoe, a claw-headed hammer, a pincers and an augur. 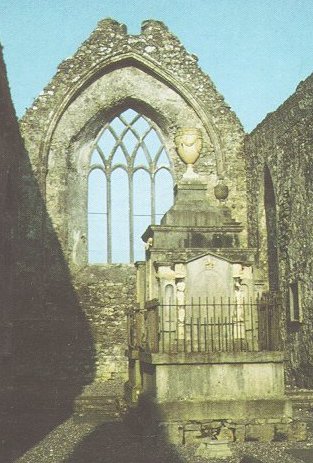 The two large tombs are noteworthy, particularly the larger one, centrally placed in the choir. It was erected for Lady Mathilda Birmingham who died aged 20 years and 10 months in 1788, fourth daughter of Thomas Earl of Louth, Baron of Athenry and premier baron of Ireland – the last of his line.

The tomb is now sadly damaged, apparently by British soldiers searching for treasure before they left Athenry forever in 1922, but is still of special importance for its stucco decoration: one panel mentions Coade of London and the date 1790 while the urn atop the monument shows portrait-heads of lady Mathilda and is inscribed “Coade Lambeth 1791”; Coade was a Londoner who became famous for his invention of a stonelike material known as Coadestone, the secret of its manufacture dying with him.   The other tomb is in the extreme south-east corner of the church.  Its importance lies not in itself but in that it belonged to the De Burgh family and was “repaired” by one of them, Ulick John Marquis of Clanricarde, in 1835., ‘,The family motto UN ROY, UNE FOY, UNE LOY (one king, one faith, one law) is carved on the coat of arms.

The Priory of SS Peter and Paul is now a National Monument in State care. 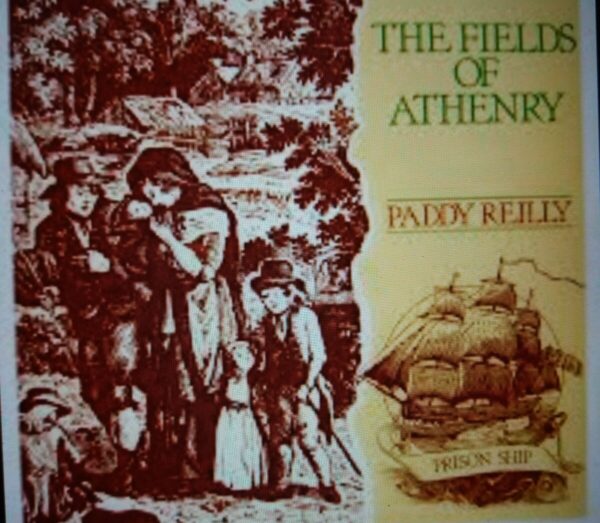 From any research (1780 to the tum of the century) I leamed, that the… by Aggie Qualter
General History Archive | Entertainment, History