Pat Kilkelly – By his brilliant saves on Sunday last, this custodian must be a serious contender for the position lately vacated by J. McGauran.

Brendan Higgins – Once this astute player gets the ball in his hands, he can jockey his way through all obstacles.

Joe Whyte – Has made goal getting a Racket in the Game; can needle his way through anything.

Joe Egan – This stalwart defender hails from a camp bristling with the a galaxy of stars; gives a sound display in victory or defeat.

Denis Madden – An ex—Dublin Co. forward. When Dinny sounds the Clarion call, skin and hair flies. Opponents’ goal will have many a narrow shave.

John Joe Whyte – Kneads no introduction to first class football. Can give spectators a plain or fancy exhibition.

Willie Corbett (Captain) – Formerly played with Newcastle dreadnoughts. This six- footer has an advantage even over the Kerry Captain as Willie need not spring.

Peter Curran – This custodian is well known for his cagey playing. Forwards will often find themselves snookered with Peter between the sticks.

Stephen Jordan – This De Wett who never took a wet, is always in the peak of form. Advocates the use of nothing but ‘Parliamentary’ language on the pitch.

Jimmy Burke – This nippy forward is adept at swerving. Can drive his way through anything.

Martin Glynn – This robust player hails from Cappatagle. Never caught out of position – A master of timing and control.

John Doherty – This sound defender, possesses a rare turn of speed. “Fears” nothing -Gives the opposition a “suck” in.

John Cunniffe – A versatile and talented player from G.S.R. Club. When Jap accelerates, his solo runs down the line are a treat to watch.

Parade of teams takes place prior to the match, led by Brennan’s Accordion Band.

Brendan Higgins, Davis Street, was a keen horseman and follower of hounds.

Denis (Dinny The Barber) Madden, Davis Street, was once told by a high ranking American General to stop pointing his gun at him because ‘It might go off’. A close ‘shave’ for the American no matter which way he turned! I’d say Dinny could ‘blow his trumpet’ also.

Peter Curran – in goal – was a snooker player of note in a time when people thought that being good at snooker was ‘the sign of a miss-spent youth’.

Jimmy Burke, Binn, was a great car driver and probably the ‘Schumacher’ of Athenry in the Forties.

John “Jap” Cunniffe worked on the GRS – Great Southern Railway. The ‘Japs’ and the ‘Germans’ found favour with many Irish people during the War years.
The venue was, The Back Lawn. I’m sure the referee of the day, Frank Kilkelly, who lived in Caheroyan next door to Keatings, could tell us all about it. 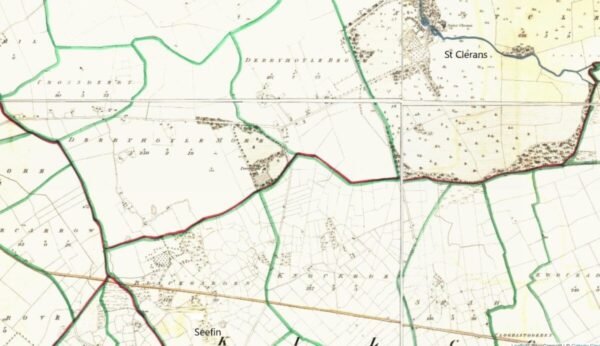 The Hanging of Anthony Daly