Skip to content
The Mace and Seal of Athenry 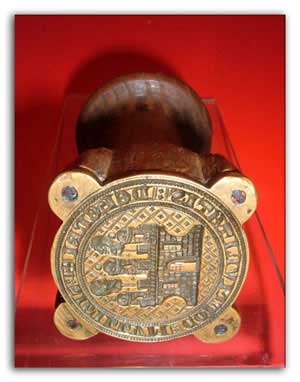 The mace as shown is of very singular design, being a clenched fist couped below the wrist, solidly cast in bronze or antique brass and mounted on a stout ashen handle. It is probably the oldest object of its class (a civic mace) to be pointed to in the British Isles. The metallic portion measures 4.25 inches in length and 3.5 inches across the knuckles. The handle is about 7 inches long and looks very old, but has probably succeeded an older one. The weight of the whole mace is 1 lb.  Compared to the Athenry Mace many others would have been designed for ceremonial use more than anything else.

The Athenry Mace was not intended to be used as a toy or to grace civic procession.

It was a weapon, which when need required might prove highly persuasive in the hand of a man who preferred action to verbal argument.

The Seal which at present is riveted to a modern ash handle bears a castle, from the battlements of which rise two human heads fixed on spikes.

These heads were very well designed and characteristically cut, bearing all the marks of the Irish mode of wearing the hair and beard. No local tradition points to the reason of these ghastly trophies appearing on this most curious civic seal; but history records that two great battles were fought hear, in the thirteenth and fourteenth centuries, which may well have given cause for this singular device.

Editor’s note: It was the custom to raise the heads of falen enemies on spikes over castle gates as a reminder to others not to tempt fate. The heads on this seal are traditionly thought to be those of Feidhlim O’Connor, King of Connaught and Teige O’Kelly, King of Uí Máine. They were killed in the Battle of Athenry in 1316.  Thanks to the efforts of Professor Rynne and a letter in the Athenry Journal the Mace and Seal are now at home in Athenry’s Heritage Centre.

Mystery of the Missing Mace and Seal (Record)

Ancient Mace and Seal make their return to Athenry (Record)

In 1920, James Daly of the Connaught Rangers led a mutiny in India in… by Aggie Qualter
General History Archive | Education, History, People