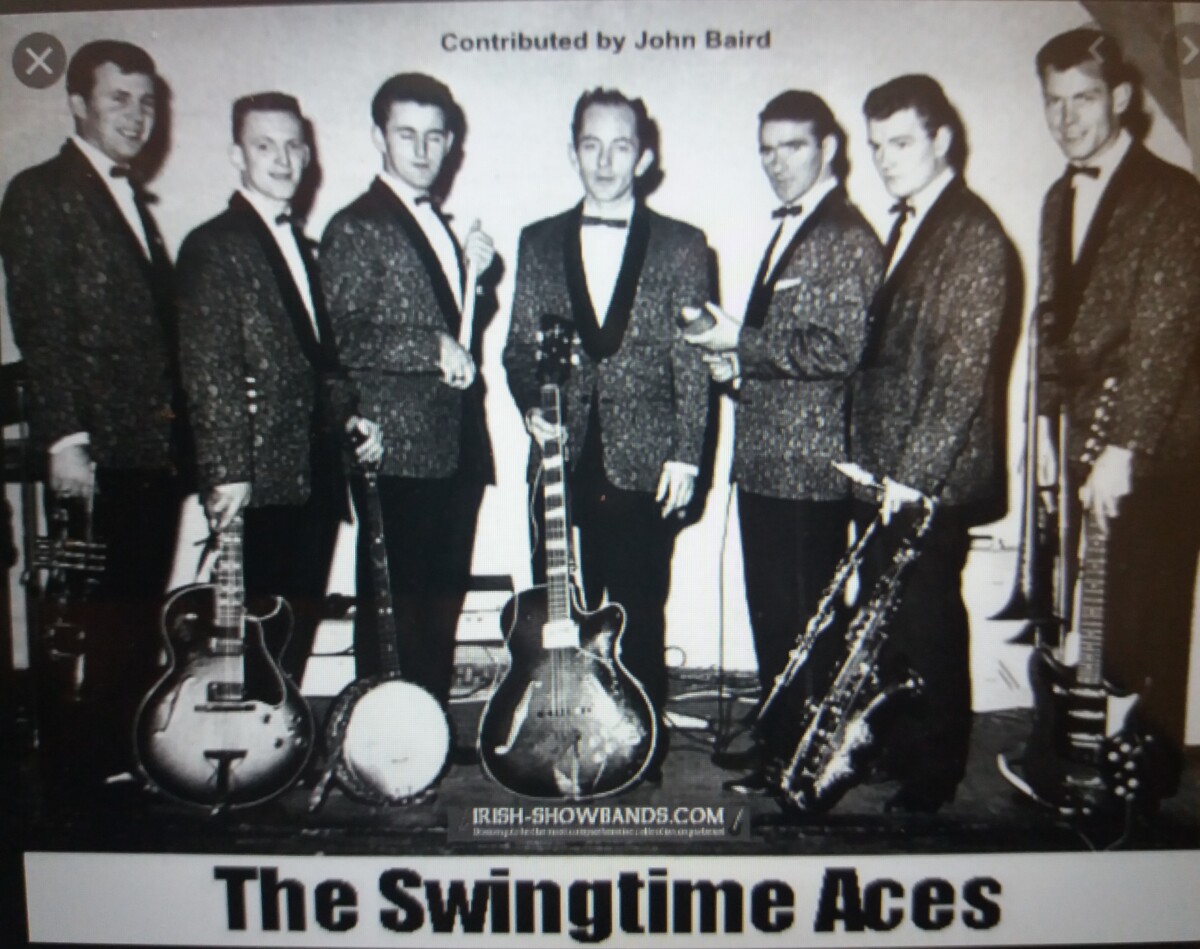 On Sept. 14th. 1972 the Swingtime Aces its their final performance in the Carousel Club, Manchester. There ended fifteen years of musical history for this band that began in the late 50s in the Athenry area. The Swingtime Aces Band that first played in late 1957 comprised of Jim Ruane, Ruanes Garage (bass) , whose hard work over the previous years made the band possible, Derek Kennedy, Athenry (vocals); Sean Glynn, Claregalway and now living in Loughrea (sax), Billy Kelly, Tuam (Trumpet), Tommy Hynes, Athlone (trombone), Joe Dolan, Galway (guitar), Jimmy Reilly, Athenry (drums) and Martin Conneely, Galway (piano) Martin was one of the finest pianists of his time even though he was totally blind. One of my first memories was a gig in Ballyhaunis where the band was smartly kitted out in red and white jerseys (knitted by Mrs. Holian of Prospect).  Looking back now we probably looked more like a football team than a showband. God knows we were probably better footballers than musicians at the time too.  Nevertheless, the band was on the road and what a road that proved to be.

Over the next fifteen years we travelled to every town, village and crossroads in Ireland, toured England, Scotland and Wales many times, played in New York, Boston, Chicago and Toronto.  We played in great ballrooms like The Crystal in Dublin, The Gresham Ballroom in London and The City Centre in New York.

Also at that time marquee dancing was very popular and we played in marquees all over the country during the summer months.  It was a very large part of the showband scene.

Sadly there were many changes in personnel from the early days and many faces came and went during those fifteen years.  We weren’t long on the road when a young man, Kevin Whelan, fresh from college, joined us as manager  and under his management the band went from strength to strength.

In 1963 we were chosen to play in a film called “The Girl with Green Eyes”, recently screened on Channel 4, starring Peter Finch and Rita Tushingham. We thought this was our great break, but alas, the film was banned here in Ireland.  However it did secure for us our first tour of the U.S.A. where the film has been screened in Times Square.

Under Kevin’s management The Swingtime Aces were one of the first bands to perform on the Showband Show… a very successful TV show of the time. Taking part in the show the line up was Derek, Jimmy, Joe McIntyre, Derry (sax), Jackie Flavelle (bass) who later went on to play with the Chris Barber Jazz Band in London, Jim (Gunner) Hesse, London (guitar) and Billy Curtin, Tralee (sax). 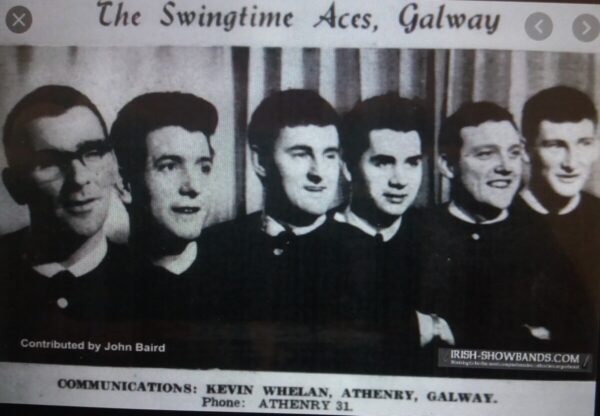 Having a showband located in Athenry resulted in many young people being enthusiastic about playing music.  In 1966 the band took on a local boy by the name of Norman Payne.  After spending some years with the band Norman moved to the U.S.A. where he has become a highly successful entertainer to this day.

The band was always highly regarded for its musical talents but it’s from good management that success comes.  In 1967 Gerry O’Neill, who still resides here in Athenry, took over management of the band and under his direction we featured on Radio Éireann, having our own weekly show over a period of three years.

Playing in a band was hard work, sometimes being on the road for five days at a stretch.  The bandwagon was a familiar sight, picking up the lads from digs around the town, setting off to play in places as far away as Derry, Port Stewart or Belfast or maybe Skibbereen, Castletownbere or Tramore.  I wonder how many miles we travelled over the years ! To do this the wagon had to be in tip top condition and this was due mainly to Joe Keating’s expertise and hard work. In those days there was no dancing allowed during Lent and this was a great problem for the showbands, as they would have no income (and no dole – social welfare) during this time.  In the early days the Springtime Aces came up with a novel way of overcoming the problem and I’m sure many people will have fond memories of the variety concerts we put on in halls in Athenry, Tuam, Castlebar, etc.  They were a great success in pre-TV days.

Over the years we had the pleasure of meeting many famous artists of the time including Chuck Berry, Van Morrison and Paul Simon, who, while visiting Galway, travelled with us to gigs – nice guy.

It is impossible for me to mention all the great musicians that played with The Swingtime Aces throughout those memorable years.  The band that played in Manchester in 1972 was Derek, Jimmy, Cha Taylor, Athenry (bass), Frank Donoghue, Rathgorgan (guitar), Gerry Gannon, Dunsandle (keyboard), Francie Higgins, Tuam (sax).

Here also is a list of lads who played with the band at one time or another and I hope I have not left out too many: Tommy Fitzpatrick, Jimmy Hafferty, Frank Hogan, Ernie Piggot, Noel Kingston, Pat Hoye, Wandsworth Jones, Bob Madden, Pat Carroll, Pat Joe O’Brien, Gerroid O’Dowd, Tom Malone, Liam Harkin, Mick Douglas, Dougie Paul, Joe Bernie and Mick Guinan.

There are some of us still involved with music, Joe Bernie, Cha Taylor, Pat Joe O’Brien, Norman Payne, myself and of course Derek.  What can I say about Derek, he was the backbone of the band all those years and he still continues to this day giving so many people so much enjoyment with his singing.

I have many happy memories, some sad ones too, of my time with THE SWINGTIME ACES… there are so many stories I could tell! Perhaps another time! 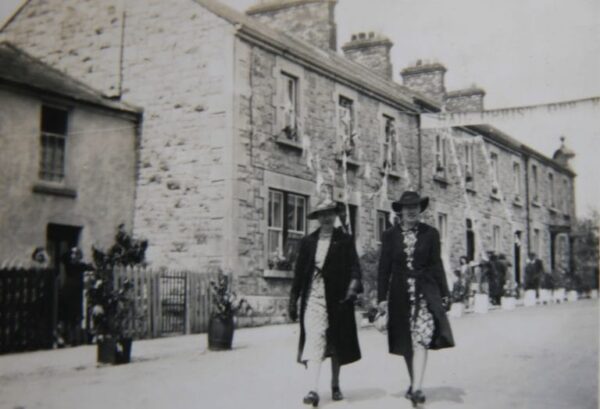