Skip to content
To school through the years: Tiaquin National School

“And then the whining schoolboy, with his satchel
And shining morning face, creeping like a snail,
Unwillingly to school …”

This dramatised observation by William Shakespeare in 1599 may be fittingly applied to our scholars at the turn of the century, as they made the long daily trek to the old school in Newcastle and to the other schools on the periphery – Cloonkeenkerril, Garbally, Gurteen (Tample) and Monivea.  The weary walk over rough, potholed roads in all kinds of weather was Spartan by modern standards. Although the national school system had been established as far back as 1831, it was not until 1925 that Tiaquin had its own place of primary learning. The chief organiser in establishing the school here was the Parish Priest, Canon Murtagh Farragher, who received enthusiastic support from the local community.

A plot of land, consisting of 0.273 hectares, in the townland of Lenamore and a short distance from the seat of the ancient Barony of Tiaquin, was purchased from the Congested Districts’ Board.  The building contractors were the Forde brothers, Johnny and Tommy of Doonane, while the carpentry and joinery work was carried out by John Coppinger of Currandoo.  Materials were supplied by Corbetts of Athenry and local volunteers provided a strong labour force.

The structure itself was designed to conform to the department of Education’s own guidelines for rural schools of the time.  The two classrooms were separated by a folding partition.  Each room had an open fireplace.  The ceiling was high; the windows were large.  The frontal facade housed the cloakrooms.  In the playground boys and girls were segregated by a high concrete wall, which extended to the toilets at the rear. Tiaquin National School opened its doors to pupils on the 6th of April 1926.  The first Principal was Thomas Rohan, “The Ivy”, and the lady teacher was Miss Delia Fleming.  There were approximately eighty children in attendance at the outset, The first pupil to enter the new school on opening day was James (G.G.) O’Grady.  As a matter of interest, the names listed on the roll of 6th April, 1926 were:

By the 1970s, the school building and particularly the roof needed urgent repairs.  At the same time, a new school was being erected in Newcastle, and so it was decided to close Scoil Náisiúnta Tí Dachonna in 1977.  Thereafter, students from Tiaquin catchment area would be transported by bus to Newcastle.  Incidentally, the last two students to be enrolled in Tiaquin were Noel Keane, April 1977, and Margaret Ruane, June 1977. Our alma mater was open to students for a half a century “in sunshine and in shadow” – a relatively short lifespan but during that time, many students had passed through its wrought-iron gates.

It was to be decided to hold a Past Pupils’ Reunion on a date between Galway Races Week and the 15th of August, 1998 to facilitate the holiday arrangements of former students, especially the Diaspora.  The names and current addresses of those on the school registers from 1926 to 1977 would be obtained and letters of notification duly posted.  The meeting also decided that a book, containing historical, topographical and anecdotal data on the school and its environs would be published.  It is hoped to have a Mass celebrated on Reunion Day and a gala function to be held on the night – at a venue yet to he decided.

It is the vernal equinox as we pen these paragraphs.  The deserted edifice that was Tiaquin National School looks eerily elegant under a crescent moon.  The twin-tailed comet Hale-Bopp glows above Aghafadda – four hundred miles above!  And we recall the day, long ago, when we skipped class and “arkled” over Tom Ford’s ditch to follow the hunt into the west.  “Thereby hangs a tale.”
“Aoibhinn beatha an scoláire” 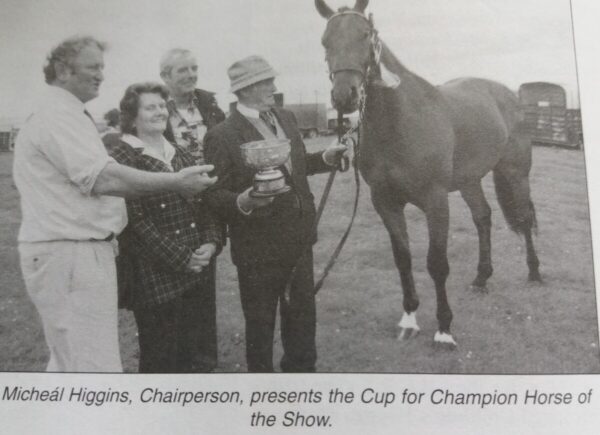 From The Horses Mouth

In the 1940s and 1950s in rural Ireland, the role of the horse was of… by Micheál Ó hUigginn
Carnaun Centenary Archive | Education, Farming, History, People, Sport