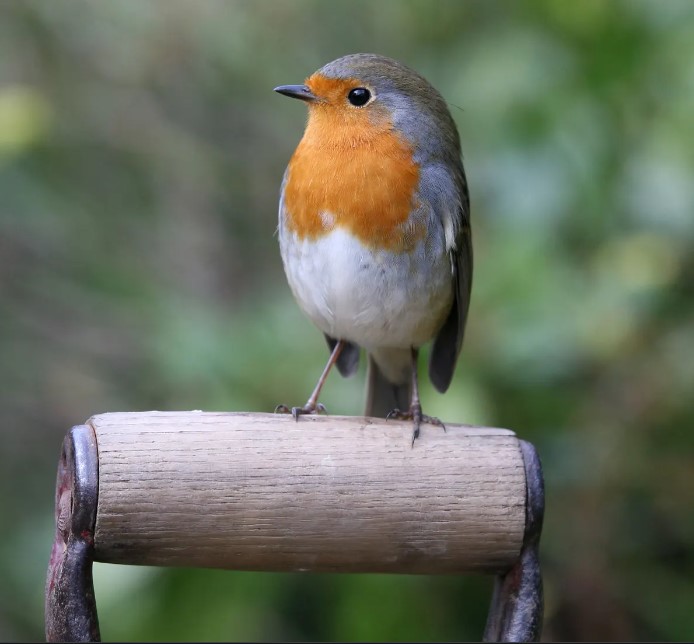 The robin is a particular favourite among bird lovers; and enjoys a popularity with man unrivalled by any other species. It is a year-round bird, and a constant gardening companion. Over the centuries legends have built up about bad luck incurred by anyone harming a robin. A Christian link has also been attached to the legend because the robin’s red breast was supposedly stained by blood after the bird had been pricked by Christ’s crown of thorns.

The adult birds get together in pairs in January, and after a short courtship, a bond is built up between the two so that they accept each other. Then starts the work of nest-building and egg laying as the weather gets fine. The nest is usually very well concealed and hard to find, often in a tree well covered in ivy. The clutch of white eggs with pale reddish freckling is laid, and when complete generally consists of five or six eggs. After two weeks the eggs hatch out and then the chicks start to dominate the parents lives with their enormous appetites. Not so much unlike our human behaviour, as they eventually leave the nest weighing more than their parents. One naturist reported that two particularly attentive parents built their nest in a cart which went on a two hundred mile round-trip just after the young hatched, and the parents undaunted, accompanied their offspring, feeding them along the way.

Once the young are ﬂedged, the adults usually build a new nest in the same territory and, unless disturbance by a cat, ﬂooding of the nest in bad weather, or thoughtless hedge cutting will raise another brood later in Summer. It is reckoned that a single pair of robins breeding successfully twice a year, and their offspring doing the same, would become nearly ten million pairs in ten years. Of course, this does not happen as the majority of them die. They fall prey to cats, owls, cars, plate glass windows, and harsh winters.

The robin is a cheeky little fellow and, when one is digging a garden will come within a couple of feet of the digger to pick up exposed worms. The only other wild bird I know will risk coming that close to a human being is the jackdaw, when suddenly discovering that some adult or child had failed to keep their arm upright enough after buying a 99 in some ice cream shop, and allowed it to plop to the footpath or street. When the jackdaw gets the first couple of beakfulls of the 99 instead of the unfortunate purchaser, he will stand his ground despite the close proximity of humans, and fair play to him.

Despite mans continued pollution of our environment let us hope that the robin will be with us to the last day and, in the meantime we hope to see him visit our gardens on a regular basis, and adorn our Christmas cards and Christmas trees for Christmas and the Millennium celebrations. 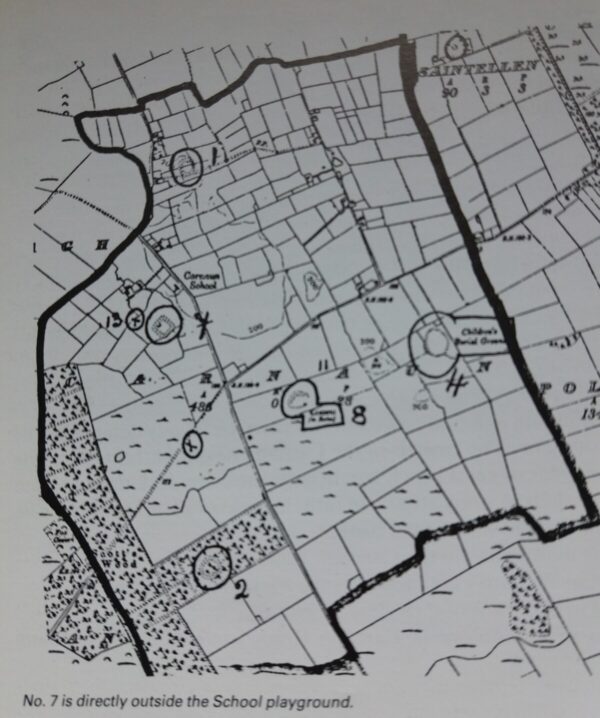 Some Archaeological Sites in the Carnaun School Area