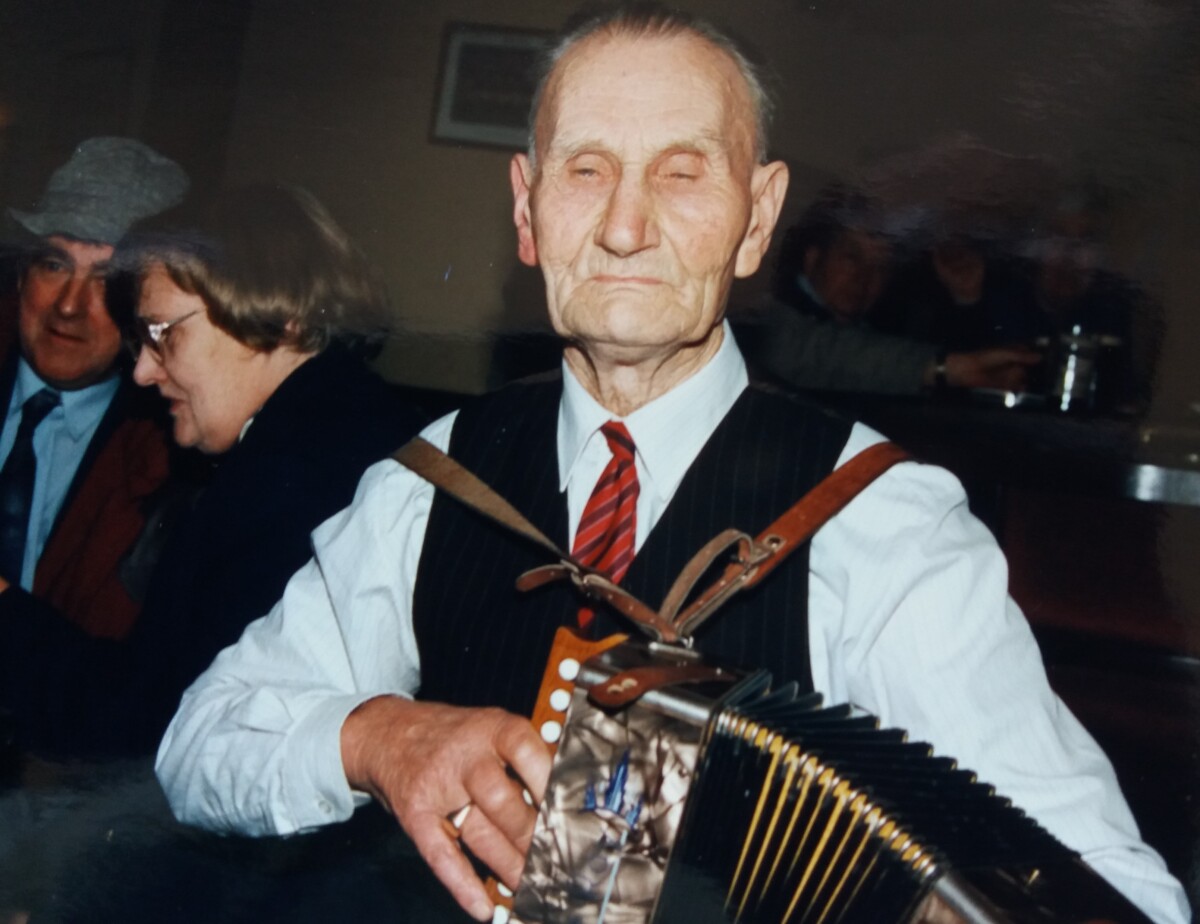 “Music, oh how faint, how weak,
Language fades before thy spell,
Why should feeling ever speak,
When thou canst breathe her soul so well”
(Thomas Moore)

On the edge of the parish of Athenry is the townland of Coldwood.  The busy main Galway/Dublin road cuts through the townland. Opposite Coldwood National School a small winding bóithrín brings you to the old thatched cottage of melodeon player and set dancer Bill O’Toole. Set in the midst of tall trees on a bend on the road, this old thatched house which is over 200 years old represents generations both past and present. The sound of birds and wind whistling through the trees are ever present.

On a recent visit to Bill’s house we got a warm welcome at the door from Bill and his wife Molly. Chairs were prepared beside the warm turf fire with its large stone arch and hobs on both sides. Refreshing drinks were soon produced and a long timber table in the centre of the kitchen held plates of sandwiches, cakes and biscuits for all present. Under the deep window ledge on the floor was an old four stop melodeon and a 2-row Hohner Accordion. 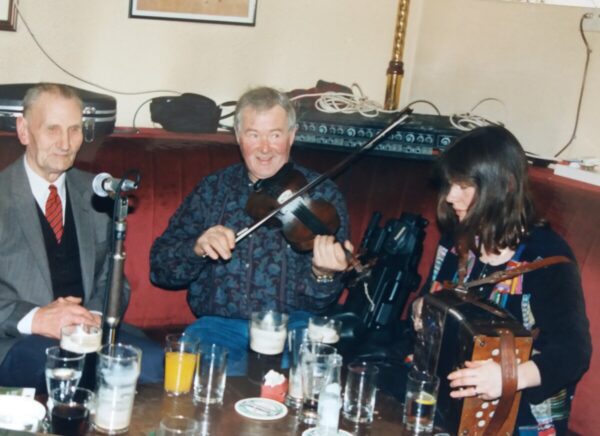 After much conversation and laughter Bill began to recall some of the memories of his life. He was born on the seventh of March 1915. He lived his entire life in this house: “I had great ould times in this house” says Bill .”In my youth it was a great house for cards, music, song and dance.  The Kellys Pat Willie and Tom used to visit almost every night for the card games. So did the Keanes, the Banes, P. J. Cahill ,God Rest Him, and the Commins”.

There was a very close community in Coldwood at that time and everyone helped one another out. There was a great regard for music and song.
“I had two brothers and two sisters. Times were tough in those days. There wasn’t much money about and whatever money you had you were damned glad you got it. We appreciated whatever we had and music was one of those things”.

Bill always did a bit of shooting, rabbits and foxes mainly. When shooting at night, the top of the barrel was painted white in order to take proper aim. Often when the turlough went low the trapped eels would be brought home and fried in the pan. He recalled his youthful days as ones of great happiness. Carefree days which were spent enjoying life to the full.

Occasionally our conversation would stop when Bill would take the melodeon and play a few tunes. He played “The Frost is all over” and “Humours of Glendart” two very old jigs. Playing music seems as natural to him as breathing. The tune went from jigs to eels, flings, hornpipes foxtrots and slow airs. His lively rhythmic music would often end with sudden humorous tops, followed by conversation, then back the music again!  He is modest about himself but does say that “its at music for dancing to” (him being a set dancer himself). 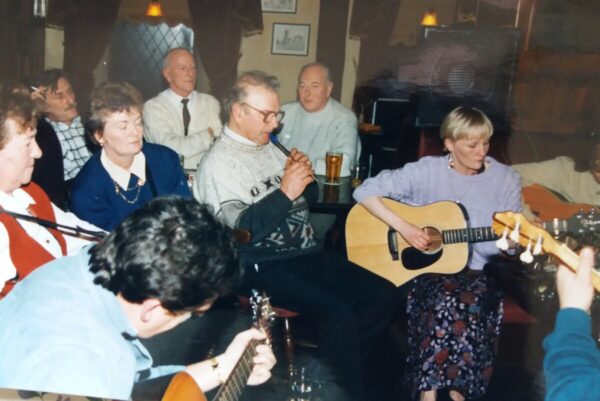 “Where did you learn your music from Bill”? “Sure I never learned music in my life, I just listened to it and played it.  My mother played the melodeon. She bought her first melodeon in Sweeney’s in Athenry for twelve old shillings.  She was a good player but my sister Maggie May was very good and played a lot for local dances, you know.”

“There were lots of house sessions when I was young Bina Cahill played melodeon, Ellie and Margaret Commins played melodeon and violin. They played at my wedding on the 3rd of May 1959.Tommie Healy was a very good melodeon player also. All of these players lived in Bill’s immediate locality.  “I suppose I was about 12 yrs old when I learned the Melodeon. I learned from my mother mostly; I learned all my music by air”.

There was a gramophone always in Bill’s house and some music was learned from the old 78 recordings of Michael Coleman (fiddler), James Morrison (fiddler) and others. The greatest source of new tunes was from the local musicians.

Bills wife Molly (Harte) is also from a very musical family. The Harte family home was renowned for good music sessions and it was at these sessions that Bill first met Molly.  Andy Harte, Molly’s brother, was a well known accordion player. 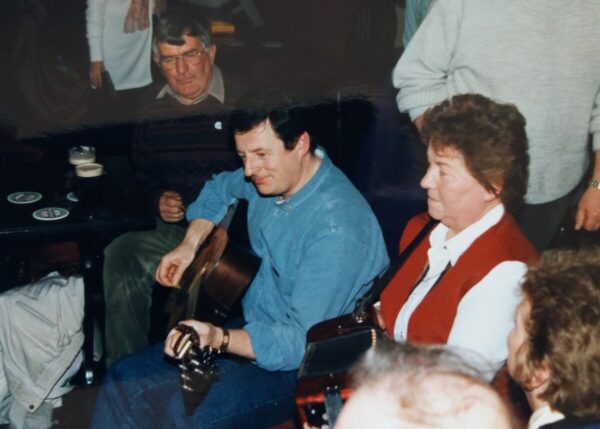 Gerry Mulvihill playing at the party

Bill also mentioned a man called Jack Commins from Cahertiarmaid whom he thought had a great style of playing and had an enormous repertoire of tunes. Bill played little music from his mid-twenties to his early sixties. Farming and raising a family left little time for music. His interest was revived by the encouragement of accordion player Dominic Parr (Athenry) who gave Bill a melodeon in the mid-seventies and Bill attended the many sessions in Dominic’s house and Tony Waldron’s house in Athenry. His family of eight sons were reared at this stage and Bill had more time for music.

With much encouragement from flute player / singer Sean Flanagan, Bill entered the All-Ireland Melodeon Competition in 1991. He won this and became All-Ireland Champion Melodeon Player. This was an extraordinary feat for a musician who had put aside the melodeon for nearly forty years. Bill is quite sure of the qualities of good traditional music. He says that he likes sweet music with good rhythm. “I’d know a good accordion player in two ticks”, says Bill with his usual charm, “before he’d have the bellows in and out twice”. Today his favourite accordion players include Jackie Daly, Charlie Harris ,Sharon Shannon, Mary Staunton and Charlie Piggott. He attends local sessions regularly in the King John bar in Athenry on Monday nights, Hollands Briar Wednesday nights and in Gort. He often takes the floor for a rousing Galway Set on these occasions.

We talked, laughed and played until the early hours. Time seemed to have stood still in Bill’s kitchen. Whether twenty years old or eighty years old the important things in life are still the same for Bill O’Toole.

His love for family and friends, good music, song and an “ould set” remain the same. This love shines through every note of his music, making Bill one of the most respected and loved musicians in Galway today.

“When thro’ life unblest we rove,
Losing all that made life dear,
Should notes we used to love,
In days of boyhood, meet our ear,
Oh, how welcome breathes the strain!
Wakening thoughts that long have slept,
Kindling former smiles again,
In faded eyes that long have wept”.
(Thomas Moore)

A Ringwork Castle in Carnaun

In order to reinforce their position in parts of Ireland conquered, th… by Martin Fitzpatrick
Lamberts of Athenry Archive | Archaeology, Education